On Thursday night, Politico beat a retreat in the great momentum debate of 2012. The site’s Glenn Thrush and Jennifer Epstein opened a big state-of-the-campaign story with this—“In the past 10 days, Mitt Romney’s campaign has gone from Big Mo to Slow Mo”—and went on to note that “an increasing pile of polling data [is] pointing to a race that has stabilized since Barack Obama’s disastrous performance at the Oct. 3rd debate in Denver.” The “Slow Mo” take was a dramatic about-face from a story published three days earlier (not ten!), in which Thrush and his colleague Jonathan Martin contrasted “a surging Romney” with a president who “is currently on the ugly end of Big Mo.”

The new Politico story is also more accurate. The presidential race has been essentially static in the second half of October, as the following annotated chart from HuffPost Pollster illustrates (a similar pattern emerges in state-level polling, which may even be trending slightly toward Obama): 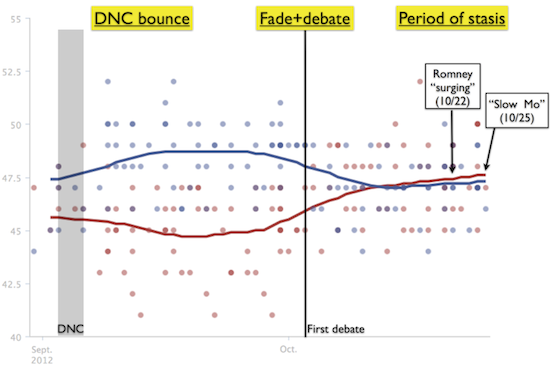 To be fair, Politico was hardly the only media outlet to portray Romney’s gains as continuing in the latter part of the month due to some nebulous sense of momentum. For instance, a New York Times scene-setter earlier this week by Jim Rutenberg and Jeff Zeleny asserted in its lede that “Obama is now facing…a neck-and-neck race with a challenger gaining ground when it matters most.” And Slate’s home page on Friday morning featured a John Dickerson story under the headline, “Mittmentum is real” (though that bold statement was promptly hedged by the subhed: “It’s a fool’s game to guess whose momentum is greater”).

The notion that Romney still had “momentum” weeks after his early October gains in the polls has now been debunked by numerous commentators and academics. And while that pushback is increasingly reflected in campaign-trail accounts, it is worth taking a closer look at why coverage of Romney’s “momentum” went wrong and what it tells us about the weaknesses of campaign journalism.

First, few reporters are knowledgeable about statistics or quantitative analysis. It is admittedly difficult to parse all the polls that are released at the national and state levels, but that’s why reporters should draw on the high-quality polling aggregation models being updated daily by Stanford’s Simon Jackman at HuffPost Pollster and Emory’s Drew Linzer at Votamatic. Relying on the best polling averages is especially important given the human tendency to find patterns consistent with our expectations, which may lead journalists to pay attention to—and cover—those survey results that are consistent with the Romney “momentum” narrative.

Likewise, journalists may be misled by the analogy to momentum during primary campaigns. As we saw during the Republican nomination contest, preferences among candidates can swing dramatically as voters seek to avoid wasting their vote by shifting to the candidate who seems most competitive. But the logic of strategic voting is not relevant to general elections that are dominated by the two major parties. In these cases, “momentum” is a largely meaningless term. Events like conventions and debates can cause brief movements in the polls, but the public’s preferences tend to stabilize relatively quickly after such shifts, which may even fade over time rather than growing in the sense that “momentum” implies.

A third factor is the role of incentives. The New Republic’s Alec MacGillis antagonized several of his colleagues in the political press with a column attributing what he considered the exaggerated coverage of Romney’s “trajectory” (i.e., momentum) to the media’s desire for a compelling narrative. The media bias debate has taught us that arguments over journalists’ conscious intentions are unproductive, but professional and commercial incentives do exist for journalists to emphasize the drama of a race. By whatever conscious or unconscious means, these may increase journalists’ susceptibility to a “momentum” narrative despite its tenuous basis in fact.

Finally, there’s the way that journalists cover the horse race. Traditionally, campaign reporters attend campaign events and seek to infer which campaign is winning, which is losing, and why. (Dickerson’s case that “Romney is peaking at the right time,” which acknowledges the tie in the polls, is based on enthusiastic crowds at his rallies.) Even though Obama remains in a stronger position in the Electoral College, his post-Oct. 3 strategy looks to journalists like the approach of a losing campaign, whereas Romney and his campaign aides are not just trying to convince reporters that they are surging but acting like it. When these campaign optics seem not to line up with the publicly available numbers, journalists too often discount the data, assuming that the campaigns must know something from their private polling that the media doesn’t.

Ideally, journalists should be trying to help the public better understand the true state of the race rather than constructing their own narratives. There are important stories to be told about why Romney stopped making gains and what implications that fact has for the final weeks of the campaign, but they can only be told if the media sheds its crude notions of “momentum” and grounds its reporting in the data.