Since Friday, the national political conversation has been dominated by a debate over the importance of President Obama’s statement, at a White House press conference, that “The private sector is doing fine.”

Unfortunately, most of the media discussion has focused on strategy rather than policy. At The Washington Post, Chris Cillizza led off a Sunday column with the assertion that “gaffes matter” in shaping election outcomes. Two days earlier, his Post colleague Karen Tumulty described the president’s remark as a “gift” Obama had “handed to Republicans.” (As both Cillizza and Tumulty noted, Obama’s point was that the private sector is faring better than the public sector, where state and local governments continue to shed jobs.)

These claims are representative of the way journalists routinely promote the importance of these sorts of pseudo-controversies, even though there is little convincing evidence that gaffes affect presidential election outcomes. The problem is particularly acute during the summer doldrums between the end of the primary campaigns and the party conventions. As we’ve seen, a bored press corps with space to fill can easily lose perspective.

Contrary to Cillizza and Tumulty’s claims, however, there is no evidence that the president has been damaged by the incident thus far. As Emory’s Alan Abramowitz pointed out by email, Obama’s job approval and trial heat numbers against Romney have not declined since the press conference. Consider this Gallup graph plotting three-day rolling averages of presidential job approval: 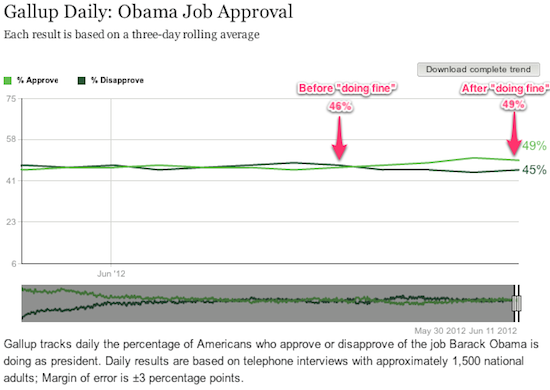 When we compare Obama’s approval from the three days before the “doing fine” statement to the three days afterward, we see that the proportion of Americans who approve of the job he is doing actually increases from 46% to 49%. Without further calculations, it’s not clear whether such a change is statistically significant given the margin of error on the polls, but the result is certainly inconsistent with the notion that the president has been hurt by the statement.

So if the “gaffe” has apparently not harmed Obama despite a steady stream of media coverage, why would we imagine that anyone will remember or care about this statement come Election Day? Cillizza, who previously defended the importance of the largely forgotten Etch a Sketch controversy, rallied to defend the significance of Obama’s gaffe, citing the way the media has amplified it and the Romney campaign’s efforts to portray it as “a window into what the president really thinks.” Tumulty similarly argued that Obama’s “gift” to the GOP is “likely to show up again and again in attack ads, conservative commentary and Republican stump speeches between now and November.” And National Review’s Ramesh Ponnuru placed a particular emphasis on negative advertising as the means by which the gaffe will affect the election, writing on Twitter that “the clip will be run over and over in ads to make basic Romney point that O[bama] has failed and doesn’t get the economic problem.”

Negative ads are indeed the most likely way that Republicans might try to make the quote salient in the fall. The problem, however, is that evidence for the effectiveness of negative ads is quite limited. The best experimental evidence suggests that the effects of television advertising decay quickly. Moreover, as Georgetown University political scientist Jonathan Ladd pointed out on Twitter, the relevant question is whether ads (or speeches or commentary) that exploit gaffes are more persuasive than the material Republicans would otherwise have used. How much will it matter if a Romney ad quotes the “doing fine” statement or, say, criticizes the stimulus or healthcare reform instead?

One way to evaluate the claim that gaffes affect election outcomes is by considering recent history. Indeed, Cillizza cites two examples as evidence in his most recent piece (the second was also cited by Tumulty): John Kerry’s March 2004 statement that “I actually did vote for the $87 billion [to fund military operations in Iraq and Afghanistan] before I voted against it,” and John McCain’s statement, in the early stages of the financial crisis in September 2008, that “the fundamentals of our economy are strong.” However, it’s not at all clear that the statements in question were the reason that the campaigns turned out as they did, rather than the winning candidates’ underlying advantages in the campaign fundamentals. Both George W. Bush in 2004 and Obama in 2008 performed approximately as well as election forecasting models expected, which suggests that these campaign events had limited influence.

Moreover, the effect of gaffes is not always clear even when they take place in high-profile presidential debates. As UNC political scientist James Stimson points out in his book Tides of Consent, Gerald Ford actually gained ground on Jimmy Carter after a widely-criticized gaffe in which he falsely said Eastern Europe was not dominated by the Soviet Union during a 1976 debate.

The underlying problem—and the biggest reason that gaffes are perpetually hyped by the media in the absence of evidence that they matter to voters—is that, despite all the cutbacks in journalism, too many reporters are chasing too few stories at this point in the presidential campaign. The incentives for perverse coverage are especially strong when little other news is being made. Editors should consider alternative approaches. Why not devote more resources to investigations, enterprise stories, and down-ballot races, and reduce the number of reporters covering the minutiae of the presidential campaign? We, the readers, will be just fine without them.