At this point, the evidence on the Internal Revenue Service scandal is clear. Contrary to the initial hype, there is no credible evidence of White House involvement in targeting conservative groups or even evidence that Tea Party or other conservative groups were targeted exclusively. It turns out that the keyword lists used by the IRS to target groups applying for tax-exempt status for additional scrutiny also included terms like “Occupy” and “Progressive” as well as “occupied territories” and “open source software.”

Nonetheless, the scandal could have serious consequences for the IRS. As The New Republic’s Alec MacGillis argued this week, Peggy Noonan’s comparisons to Watergate may be hyperbolic but the reputational damage to the agency that she describes could be real.

The problem is what we might call the “scandal attention cycle.” George Washington University political scientist Danny Hayes has described how the “issue attention cycle” results in a surge in news coverage of a new issue like gun control followed by a fairly rapid decline, which received increased attention after the Sandy Hook massacre but ultimately trailed off, following a similar trajectory to previous high-profile shootings. A similar pattern often occurs for scandal—there’s a surge in initial interest as reporters rush to embrace the scandal narrative, but the press quickly loses interest after the most sensational charges are not substantiated. The problem is that it often takes time for the full set of facts to come out. By that time, the story is old news and the more complex or ambiguous details that often emerge are buried or ignored.

The coverage trajectory of the IRS scandal is a case in point. For each calendar week since the scandal began, I counted the number of total and front-page articles on the controversy that appeared in The New York Times, The Washington Post, and Politico, which are arguably the three most important sources of national political news and often set the agenda for coverage by other press outlets. (See the note on measurement below for details on the methods I used.) The results are plotted in the figure below, which include annotations of major disclosures in the case. 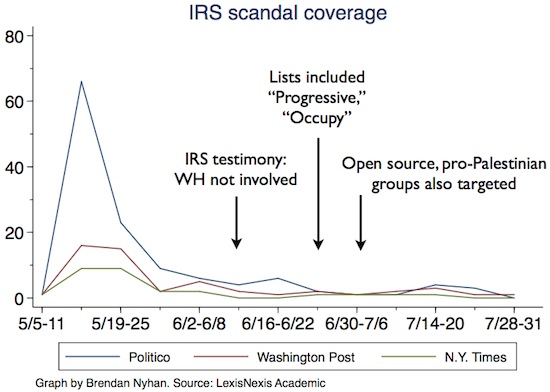 The story started with an unexpected apology from Lois Lerner, the head of the IRS division that handles applications for tax-exempt status, on Friday, May 11. As concern grew, the story exploded in its second calendar week, which was dominated by high-profile coverage across the national media: The New York Times published nine stories, including five on the front page; The Washington Post published 16, including eight on A1; and Politico ran an incredible 66, including 12 that appeared at the top of its home page. But as contradictory facts emerged in June and early July, they had already lost interest, publishing a fraction of the stories that ran during the initial weeks of the scandal.

The trajectory is even clearer if we look at each publication individually in the figures below, which differentiate between the total number of stories published per week and those that appeared on the front page: 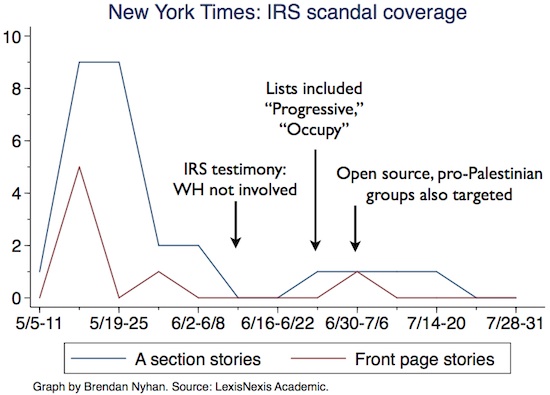 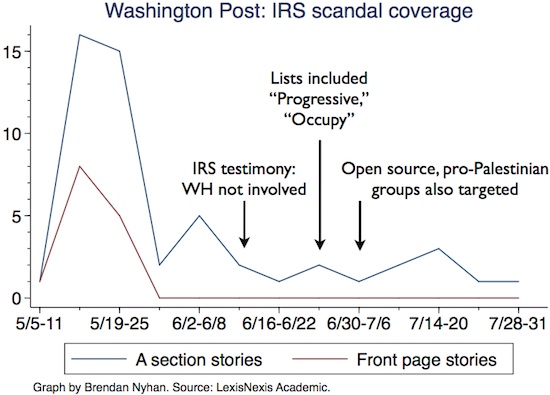 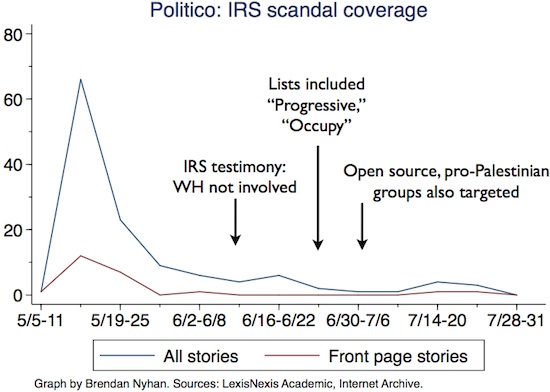 With the notable exception of an A1 New York Times story in early July by Jonathan Weisman on “the more complicated picture now emerging” in the case, all three publications gave much less coverage to the story once the facts were known—and, in particular, much less front-page coverage. This bar graph summarizes how much of the coverage appeared in the first three calendar weeks of the scandal (for context, Weisman’s piece about the targeting of open source and pro-Palestinian groups—the last development annotated on the graphs above—was published on July 5, almost two months after the scandal broke): 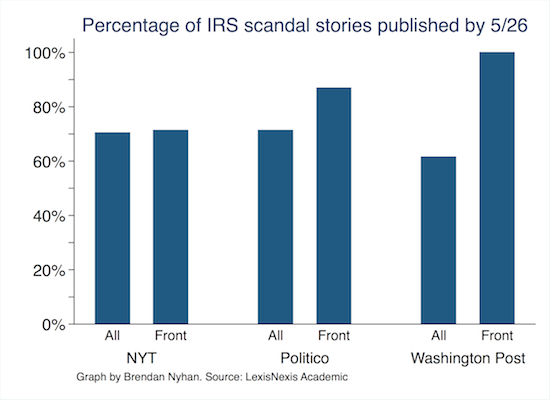 With so little prominent coverage after the full facts of the case became clear, is it any wonder that members of the public might still be confused?

Correction: Due to a computer coding error, the graphs of New York Times coverage that originally appeared in this story were incorrect. They have been replaced with corrected versions. Thanks to reader Steve Kass for noting the error.

* A note on measurement: I searched LexisNexis Academic for stories in which both IRS, I.R.S., or Internal Revenue Service and audit, exempt, target, or conservative appeared in the headline or lead between May 11 and July 28. I restricted the New York Times results to those that appeared in the A-section and were written by the national desk. The Washington Post search was restricted to A-section stories that were attributed to the print newspaper rather than its website or blogs. Front-page articles for Politico were classified using time-stamped snapshots taken by the Internet Archive’s Wayback Machine when available. Articles were coded as appearing on the front page if they were primary headlines in the first three rows of content when the top headline was a full block (example) or in the first four rows when the lead story was smaller and had two vertically aligned stories to its right (example). This area typically included approximately the same number of stories as a newspaper front page.

Follow @USProjectCJR for more posts from this author and the rest of the United States Project team.