Misperceptions, like zombies, are difficult to kill. A recent Kaiser Health Tracking Poll, for instance, found that the “death panel” myth is still believed by a substantial portion of the American public more than four years after the term was first coined by former Alaska governor Sarah Palin.

What can journalists do? There is reason for concern that artificially balanced coverage may misinform the public about the state of the available evidence, but trying to set the record straight isn’t always effective either. In fact, research I have conducted with the University of Exeter’s Jason Reifler and Duke University’s Peter Ubel concludes that corrective information about controversial issues like “death panels” is often unpersuasive to the most susceptible ideological group and sometimes makes the problem worse—a phenomenon known as the backfire effect. This research inspired us to start to develop a set of best practices for journalists. In a New America Foundation report published last year, Reifler and I presented a series of recommendations based on social science research to help journalists counter misinformation more effectively.

In a follow-up New America Foundation report published today, Reifler and I summarize the results of a series of experiments conducted in late 2012 and early 2013 that put several of our previous recommendations to the test.

First, we examined whether corrections are more persuasive if they come from sources that are likely to be credible to skeptical audiences. At the outset of the death panels controversy, for example, I praised ABC’s Kate Snow for pointing to opponents of healthcare reform who acknowledged that the claims were false. Here’s how her report began:

Accusations that the health care reform bill now pending in the House of Representatives would use “death panels” to deny care to sick seniors and children with birth defects have taken center stage in the health care debate, giving the Obama administration even more of an uphill climb in getting the measures enacted into law

But health care experts—even those who do not support the version of the health care reform bill now being discussed—note that these accusations are shocking, inflammatory and incorrect.

To test this hypothesis, Reifler and I constructed news stories correcting the false claims that President Obama raised taxes early in his term and that Mitt Romney shipped jobs overseas as CEO of Bain Capital. We then presented a nationally representative online sample with different versions of each story in which we randomly varied both the media source (Fox or MSNBC) and ideology of the group cited as the source of the correction (the liberal Center for American Progress, or CAP, the non-partisan RAND Institute, or the conservative American Enterprise Institute, or AEI).

Our results indicated that varying the media outlet or expert identity had no effect on liberal beliefs in the Romney/Bain misperception. However, conservatives responded quite differently to the “Obama didn’t raise taxes” story depending on its source, even though the substance of the report did not change: 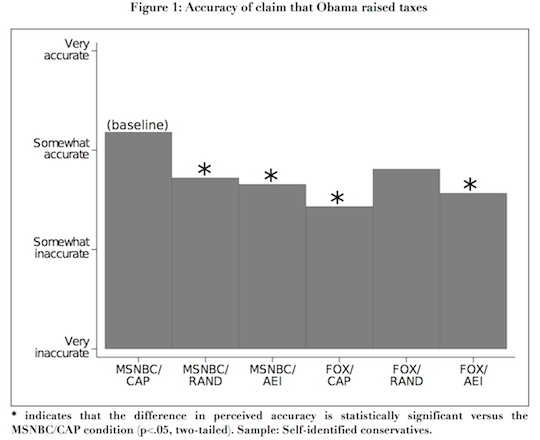 The liberal outlet/liberal source combination of MSNBC and the Center for American Progress was highly unpersuasive to conservatives relative to the other outlet/source combinations tested. When MSNBC quoted a non-partisan or conservative source, however, the story was more effective in reducing misperceptions among conservatives. These results suggest that reporters who hope to reduce misinformation among skeptical audiences should seek to identify sources who can speak against their ideological interests (for instance, a Cato Institute expert who says “death panels” are “fictitious”). Likewise, citing other partisan or ideological news outlets that are speaking against their political interests may be more persuasive (for instance, reporters covering the so-called Vitter amendment could point to skeptical coverage debunking the claim of a Congressional exemption from Obamacare in the conservative National Review).

Our second experiment tested a hypothesis drawn from research in psychology, which has found that, when trying to refute a false explanation of an event or outcome, it is more effective to provide a causal alternative than to simply state that it is untrue. In the fictitious scenario used in one study, for example, respondents who were told of the presence of volatile materials at the scene of a suspicious fire continued to blame the materials even after being told that the initial report was mistaken. In order to persuade people that the materials were not to blame, it was more effective to instead present an alternative causal account attributing the fire to arson.

We tested this idea in a scenario involving a fictional politician named Don Swensen whose unexpected resignation from office sparked rumors of an investigation. Presenting respondents with credible evidence that the rumors were false, in the form of a letter from prosecutors stating he was not being investigated or charged, was somewhat persuasive. But offering an alternative explanation for the resignation—Swensen left to take a job as president of a local university—was better: 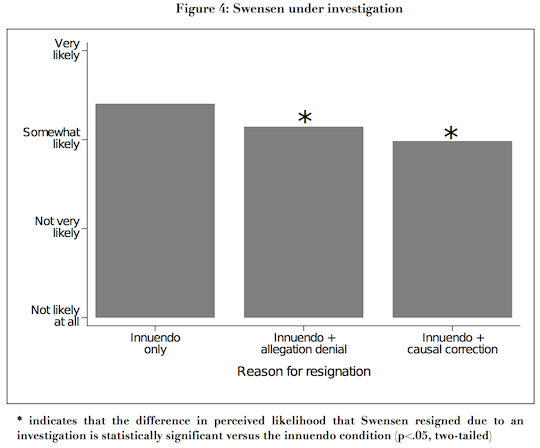 Of course, convincing explanations of events are not always available to journalists—some outcomes are difficult or impossible to explain—but this finding suggests that alternative causal accounts should be prominently featured when possible.

Finally, we examined the hypothesis that the use of negations like “not guilty” could inadvertently reinforce the characterization they are intended to refute. In this case, when we contrasted headlines and article text describing a politician who was charged in a bribery trial as either “not guilty” or “exonerated,” we found no statistically significant differences in how favorably he was viewed or in perceptions of his honesty. Given the concerns raised in previous research, however, we still recommend avoiding the use of negations when possible.

Based on these results, we offer the following recommendations in our report:

Follow @USProjectCJR for more posts from this author and the rest of the United States Project team.

Has America ever needed a media watchdog more than now? Help us by joining CJR today.
Brendan Nyhan is an assistant professor of government at Dartmouth College. He blogs at brendan-nyhan.com and tweets @BrendanNyhan. Tags: misinformation, political science, zombies