A week ago, The Huffington Post’s Sam Stein and Ryan Grim published an article repeating Senate Majority Leader Harry Reid’s claim that GOP presidential nominee Mitt Romney hadn’t paid taxes for ten years. Though Reid provided no evidence other than hearsay about what he was told by an unnamed Bain investor (which HuffPost clarified in the ninth paragraph of the story), the story set in motion a controversy that exemplifies how partisans and ideologues exploit the structural weaknesses of journalism and factchecking.

For many political reporters, journalism is largely a matter of writing down what powerful people say and do and analyzing why they say or do those things. Within that framework, the accuracy of the claims that powerful people make is rarely the focus of coverage. Instead, the claims of mainstream public figures are typically reported in a “he said,” “she said” style that maintains the supposed objectivity of the reporter and media outlet while avoiding complex factual debates that could alienate readers.

When so many reporters are practicing this style of journalism, it should not be surprising that politicians have become adept at targeting its weaknesses. In All the President’s Spin, my Spinsanity co-editors Ben Fritz, Bryan Keefer, and I documented how the Bush administration relied on misleading half-truths and strategically ambiguous language to promote its agenda. Because few of these claims were outright falsehoods and debunking them often required detours into policy specifics, they were typically reported without challenge or in a “Bush says X, Democrats say Y” framework.

The conclusion to the book warns that Democrats were starting to embrace similar tactics. Reid’s attacks on Romney are a case in point. The Nevada senator is a canny politician who wants to help Democrats keep the media and public focused on Romney’s wealth. One angle of attack is Romney’s refusal to provide tax returns before 2010, which breaks a longstanding norm in presidential politics. Though many reporters pressed the GOP nominee for more information, Romney held fast and the story was starting to die down due to a lack of day-to-day news developments. The controversy over Reid’s claim has put it back in the news.

Unfortunately, Stein and Grim allowed HuffPost to serve as the delivery vehicle for Reid’s attack. As my CJR editors Liz Cox Barrett and Greg Marx have argued, the political costs of irresponsible accusations are low when “there are reporters willing to write up” such a speculative claim and “ensure its dissemination to a wider audience” in a neutrally framed article. Some disagree, arguing that HuffPost should have reported Reid’s accusations. For example, The Washington Post’s Erik Wemple defended Stein and Grim, stating that “the dissemination of Reid’s words is “responsible, compulsory. It would be a shame, after all, if Reid’s constituents passed ignorant of the evidentiary standards to which he subjects his mudslinging.”

There is a legitimate argument to be made for the necessity of publishing such an explosive accusation from an important public figure, but in that case Barrett and Marx correctly argue that the HuffPost reporters should “have foregrounded … the untrustworthiness of Reid’s account.” Neutral treatment of such claims is likely to reinforce the unfounded impression that the Majority Leader is trying to create. Consider, for instance, the contrast between the HuffPost story and an August 2 article by McClatchy’s William Douglas. As in my post on coverage of Maricopa County sheriff Joe Arpaio’s birtherism, I’ve highlighted credulous reporting in red and the portions of both stories that provide a critical perspective on Reid’s claims in green (click on the thumbnails below for larger images): 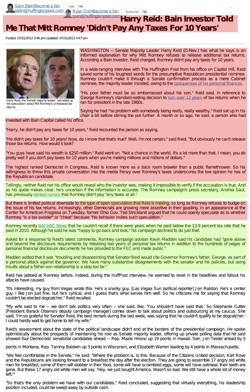 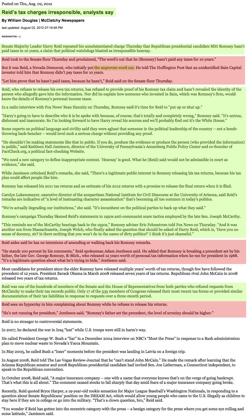 In comparison to McClatchy, HuffPost devotes far more space, including its headline and lede, to documenting Reid’s claim. It is true, of course, that Douglas had the luxury of writing his story later in the controversy, which allowed for more context and less emphasis on the details of Reid’s statement. But the timeline of the story does not abrogate HuffPost’s responsibility to provide context—indeed, as the launching pad for the smear, the obligation on Stein and Grim to question the evidentiary basis for the claim is arguably greater.

No one, including Reid, has seriously contested the claim that his accusation is unsubstantiated. Instead, Romney opponents and critics of factchecking organizations have relied on a series of semantic maneuvers to try to change the issue. This approach has often been successful—in part, it seems, because the GOP nominee has breached a norm in not releasing more tax returns, creating an impression among reporters that he has something to hide.

Place the burden of proof on Romney

Some Romney critics have suggested that the former Massachusetts governor’s failure to release additional tax returns somehow legitimizes unsubstantiated claims about their contents. A related approach is to claim that Romney is obligated to disprove the allegations since he failed to release previous tax returns. But as I wrote on Twitter, I can’t imagine that Reid defenders would rise to defend a public figure who was making claims about, say, President Obama’s college transcripts based on an anonymous tip (see, e.g., Donald Trump’s tweets yesterday). While Obama’s transcripts are not in serious question beyond the fringe, the guilty-until-proven-innocent logic being applied to Romney would suggest that Obama’s very refusal to release them implicates him. After all, Obama could easily disprove any such claim by releasing his transcripts! Consider another example: if John McCain had not released his medical records, would it have been acceptable for Democrats to accuse him of dementia or a recurrence of melanoma based on an anonymous tip? Again, McCain could have disproved such a claim. By the logic of Reid’s defenders, virtually any accusation that McCain could have refuted would therefore be justified.

Attack truth ratings and exploit the difficulty of proving a negative

The Pulitzer Prize-winning factchecking website PolitiFact looked into Reid’s claim and found “no evidence to back [it] up.” Indeed, they quote three experts calling it “preposterous,” “extremely unlikely,” and “highly unlikely.” Rather than focus on these findings, however, critics are exploiting PolitiFact’s flawed rating system, an increasingly common tactic among targets of the group’s critiques and their defenders. In this case, the site rated Reid’s claim “Pants on Fire,” prompting a frustrating chorus of protests on blogs and Twitter that PolitiFact can’t prove Reid’s statement is false. That’s of course true, but misses the point.

Imagine that Mitt Romney said an anonymous source told him that Iraq’s weapons of mass destruction had been moved to Syria before the US invasion. If PolitiFact looked into that claim, they would find no credible evidence to support it, and experts would tell them that the prospect of hidden Iraqi WMD is, well, “preposterous” and “extremely unlikely.”

The problem is that PolitiFact’s rating system doesn’t work well for irresponsible and unsubstantiated claims that can’t be definitively falsified (and likewise Glenn Kessler’s four Pinocchio rating of Reid’s statement at The Washington Post). The site is right to hold public figures like Reid accountable for making such claims, but the standard to which they are held does not easily map onto a scale of truth and falsehood. For instance, it is impossible to prove that a “Pants on Fire” rating for Reid is merited. As a result, critics can divert attention from the substance of PolitiFact’s analyses and turn the debate into a referendum on the epistemological flaws in the site’s ratings, which force complex issues into arbitrary and subjectively determined categories. MSNBC host Rachel Maddow, for instance, acknowledged that Reid’s claim is “totally unsubstantiated,” but still used the PolitiFact rating as a vehicle to dismiss the site, telling her viewers that “it’s ok to not take them seriously on anything ever.” A better approach would consider whether claims can be supported and whether they are consistent with the best available evidence without assigning labels to them (full disclosure: this is the approach we used at Spinsanity).

The controversy over Reid’s claim is likely to be a minor blip in the 2012 campaign, but it perfectly illustrates why the media is still losing the spin arms race. In a world where establishment figures in both parties are increasingly willing to smear their opponents publicly, journalists need to be more cautious about amplifying partisan attacks and more careful about how they evaluate the accuracy of those claims. Without smarter coverage, reporters and factcheckers will continue to get exploited.