During the somewhat less frantic months of the presidential campaign season—between the primaries and the nominating conventions—the Swing States Project will feature occasional profiles of people we’re calling, for lack of a better phrase, discourse leaders. These are people in the press—TV or radio hosts, newspaper columnists, people with important online presences—in battleground states who in one way or another help to lead substantive and civil political conversation. 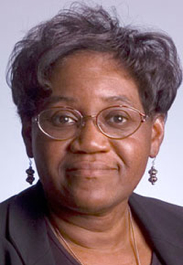 First up is Fannie Flono, an editorial page columnist at the Charlotte Observer who “writes on news, politics, and life in The Carolinas,” and who sat down Monday with Andria Krewson, the Swing State Project’s North Carolina correspondent, to talk about her role as, in her words, a “convener of conversation” in the community hosting the Democratic National Convention later this year.

To Flono, Charlotte seemed to be progressive, with a new black mayor elected the previous year. Flono, originally from Augusta, Georgia, and a graduate of Clark College in Atlanta (now Clark Atlanta University), had worked as a reporter and editor at smaller papers in Florida, Georgia and South Carolina. Charlotte seemed to offer opportunity for those who worked hard, including African Americans like Flono.

But she soon felt the weight of the past.

“The first thing Mary Newsom (then the Observer’s state editor) had me do was go to Statesville, where they were having a Klan rally,” Flono said during an interview at an uptown Charlotte coffee shop on Monday. Statesville, about 40 miles due north of Charlotte on I-77, is outside of the urban and suburban Piedmont corridor of North Carolina. The experience was a bit of a shock for the new editor expecting a broad-minded North Carolina. But that first lesson gave Flono perspective on a state filled with residents from divergent backgrounds—an “inelastic” state, per Nate Silver at the New York Times’s FiveThirtyEight blog (meaning, one without a lot of “persuadable voters.”)

During the next 28 years at the Observer, as a city editor, state editor, government editor, “public editor” (a sort of ombudsman) and as an associate editor on the editorial board starting in 1993, Flono faced external critics who labeled her that “sassy black woman,” and much worse. Through it all, she has maintained a focus on civility, returning emails and phone calls from fans and critics alike.

Now, as Charlotte prepares to host the Democratic National Convention in September, Flono, 60, writes columns, contributes to editorials, and “hosts,” at the editorial department’s O-pinion blog, “conversations about issues affecting our city, region, and country,” as the blog’s tag line has it. For example, Flono this week kicked off online discussion about Republican Gov. Scott Walker’s win in Wisconsin’s recall election, and what it “say[s] about the fate of public-sector unions and about the November presidential elections.” Among Flono’s questions: “[W]hether Walker’s success will embolden Republican legislatures like ours in North Carolina to move as aggressively on austerity measures and on trying to dilute the power of professional organizations?”

During her rise at the paper, she also squeezed in multiple fellowships, including a Nieman Fellowship at Harvard in 1998, made a 2005 trip to China through the East-West Center, accrued awards too numerous to list, and authored a book, “Thriving in the Shadows: The Black Experience in Charlotte and Mecklenburg County.”

Her collective experience has brought Flono perspective, a unique and strong voice (in a December column, as one small example, she called Newt Gingrich’s stance against child labor laws “intellectually feeble and flatulent”), and a facility with handling angry critics.
Her first boss—the person who hired her—at the Observer, then-state editor Mary Newsom, particularly admires Flono’s ability to stay cool when under attack.

“All of us journalists have had to put up with invective arriving via phone calls, letters, emails and online comments,” wrote Newsom to me via email. Newsom, who now works at the University of North Carolina at Charlotte’s Urban Institute (and for whom I do contract work there) continued:

But what she (and other African American journalists) has been hit with for years is exponentially crueler and meaner and more hateful. It can be so racist that it is eye-opening to white people who just don’t hear that nasty side of humanity all that often.

But Flono has handled it graciously, Newsom confirmed.

“Watching how she has dealt with that anger taught me much,” Newsom wrote. “By staying calm and not allowing herself to be drawn in to the nasty sniping, I think she has been a wonderful example of how a journalist can exemplify grace and equanimity.”

Flono pushes back gently when I suggest that she is a “discourse leader” in her community.

“I’m not inclined to use that label myself,” she wrote in an email after our interview. But news organizations across the country pick up her column, and she gets correspondence from a wide array of people—those who share her views and those who don’t. Flono continued:

I am most encouraged by those…who write to simply say I’ve prodded them to think deeper or differently about an issue. If I were to describe myself, though, I would say I was a convener of conversation. I have opinions, loads of them, but I really want people to think, think, think.

My perch at the paper provides a platform to get public consideration of ideas, and ways of thinking about issues they may not have considered. I also see my role as helping people bridge gaps in understanding, and finding a way to reach consensus and finding a way to be less myopic and having a broader lens about which to discuss issues and make decisions.

Flono’s columns get picked up in other McClatchy newspapers and run at the national McClatchy website, of course, but also run in other North Carolina papers like the Winston-Salem Journal, the Greensboro News & Record, and the Burlington Times-News.

Her frequently liberal stances have, not surprisingly, drawn fire from conservative bloggers in the state. Typical of those “lefties,” concluded a blogger for the right-leaning John Locke Foundation, of a 2011 Flono column (no longer available online) on public school funding and how, per Flono, the “return on investment [in students] can’t be extracted easily or quickly.” To the conservative blog, The Pundit House, a March Flono column on race and crime was the “wishful thinking of the politically correct crowd.”

So as Flono sits in one of the centers of political debate in 2012, what tips does she have for other journalists?

“On campaign coverage, unfortunately, I feel the media (all of us) fail to provide the depth of coverage about what goes on, what the truth is about issues or a politician’s stand, and what the implications are of what they propose. We do too much stenographic, ‘he said, she said,’ coverage, thinking that’s a proxy for fairness, without being very discerning about…what is being fed to us.”

She likes sites that check facts and wishes traditional media outlets would do more of it. “Our newspaper used to routinely ‘truth-squad’ what politicians said, but we only do it sporadically now,” she said.

“On several issues—rising poverty and income inequality, immigration reform, education, tax reform—I’d like to see the media be more aggressive in informing the public about how public policy decisions at the state level and national level are affecting those issues.”

The issue of income inequality, Flono observed hopefully in a February column, was actually—for a moment earlier this year—on the minds and lips of some of the presidential candidates. Wrote Flono:

Concern about income inequality and the huge and growing wealth gap in this country has found new energy in our political discourse of late.

President Barack Obama took note of it in his State of the Union address last month. Republican hopefuls for their party’s nomination to take on Obama in the November elections have been dragged into talking about it, too.

This is a welcome discussion. It is linked to the heart of the current malaise in this country - that the opportunity to succeed in the U.S. is now severely constricted - and it batters an ideal that Americans hold dear - that with hard work anybody can get ahead.

Far too many Americans see the opportunity door closed.

Earlier this month, Flono and her colleagues on the Observer editorial board made the unusual decision to rescind a candidate endorsement in the Republican primary for U.S. House District 9 after the candidate, Jim Pendergraph, attended a rally with infamous Arizona Sheriff Joe Arpaio. From that rescindment:

What a run for Republican Jim Pendergraph. After winning the Observer’s endorsement in his bid for Congress, he has done nothing but embarrass us and himself.

By buddying up to one of America’s more hateful egomaniacs and then joining with fringe “birthers” to question President Obama’s citizenship, Pendergraph has contradicted much of what he told the Observer’s editorial board in his endorsement interview last month. As a result, we have lost faith in him, and urge voters to consider Edwin Peacock or Ric Killian in the 9th Congressional District race.

Looking forward, Flono will be deeply involved in coverage of the Democratic National Convention in early September in Charlotte, with Observer editorial board members planning daily commentary online and in print. The paper is teaming up with Politico during the convention.

What’s Flono’s advice for reporters coming to town for the big event?

“The only advice I’d have is for reporters to have in mind what they want to accomplish in their coverage, and have a plan to achieve that goal. Otherwise, you can be overwhelmed with the event,” she noted via email. “This kind of look at democracy in action is uniquely ours in America, and it is only happens every four years, so it is worthwhile—but only if we cover it in ways that make it worthwhile.”

Of course, the fun snark will flow from those who see the convention as a staged party for thousands of journalists and politicos. But for Flono, you can bet she’ll find a way to convene deeper conversation even there.

Has America ever needed a media watchdog more than now? Help us by joining CJR today.
Andria Krewson is an independent journalist in Charlotte and a student in the University of North Carolina's master of arts in technology and digital communication. She worked at The Charlotte Observer for many years. Find her on Twitter at http://twitter.com/underoak or http://twitter.com/akrewson.