In the first issue of Symbolia, a publication that launches on the iPad today, you’ll find a dispatch from Iraqi Kurdistan, a profile of a Zambian psychedelic rock band, and an article about environmental devastation in California’s Salton Sea.

All of these stories are told with comics. There are strip-style comics, like the ones you devoured growing up (or perhaps more recently), as well as exquisite watercolors, digital illustrations, and informative diagrams. Symbolia’s first issue, “How We Survive,” combines the rugged hand-drawn texture of a 90’s zine with the investigative vigor and left-leaning politics of Mother Jones. But unlike other vehicles of longform journalism, Symbolia has embraced digital technology from its beginning. It will eventually be available on all tablet devices, but it will never be in print. The digital format isn’t just an afterthought, as it is for many new prose publications. It is crucial to Symbolia’s method of telling stories. The pieces are often accompanied by ambient sounds, spot animations, and other interactive elements.

Symbolia is the first U.S. publication dedicated exclusively to “comics journalism.” While serious graphic novels — like Maus or Persepolis — have proven that comics can handle difficult subjects, serious nonfiction comics are still rare. Perhaps the best-known graphic journalist is Joe Sacco, who has reported from Bosnia and Palestine and published his work in Harper’s and The Guardian. “It’s a small field because it hasn’t been around in its current incarnation for too long. Give it some time. Let some of these cartoonists build on their work,” said Sacco. 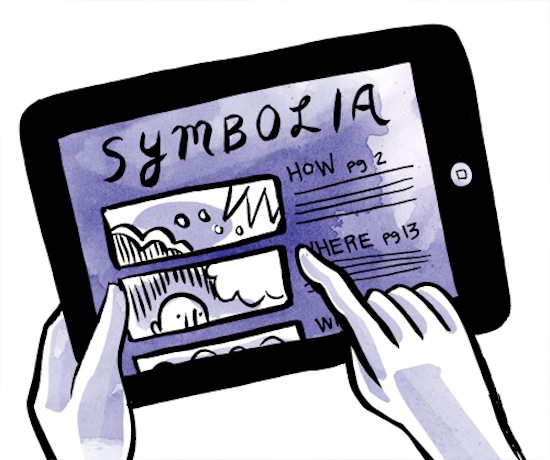 Most graphic journalists, including Sacco, have a similar career trajectory: they graduated from a traditional journalism school into a bad job market and fell back on their drawing skills. “I was trying to think of something that could really shine on the web,” said Susie Cagle, a Symbolia contributor who studied magazine journalism as a graduate student at Columbia. Cagle, who gained a following last spring for her spot illustrations of Occupy Oakland. Cagle says that the reporting process for a cartoon is, more or less, the same as it is for an in-depth article. “I take a lot of video on my phone because I prefer drawing from moving images to still images,” said Cagle. “But I do a lot of audio recording either way.” But the editing process is quite different — or ought to be. “With comics, the editing has to happen much earlier in the process,” said Cagle. “I’ll submit my initial thumbnail as an outline, but it’s hard to take changes after that.” Cagle said that this can be hard to communicate to editors accustomed to overhauling a written draft and receiving a revision within a few days — or even hours.

At The New Yorker, all cartoons are fact-checked. If a Shetland pony lacks the requisite shaggy mane, a fact checker will instruct the artist to draw until the mare’s hair is appropriately thick. This isn’t something most readers are aware of. (I happen to be a fact checker at The New Yorker.) There’s no visual language of cartoons that communicates realism — a bubble isn’t necessarily equivalent to quotation marks. “There’s still a hurdle to get over with many editors in explaining that this work is true and accurate,” said Matt Bors, who is the comics journalism editor at Cartoon Movement, a website for both fiction and nonfiction cartoons.

Bors, Sacco, and other comics journalists insist that drawing is an ideal medium for serious nonfiction, even if editors are still reluctant. “Photos have great power, but photos of horrible things can be almost unbearable. Drawings have a built in filter,” said Sacco. “When I was in Afghanistan and Haiti I would ask people if I could interview and draw them, and once someone grasped what I was doing, they were very at ease with being in a comic. If you put a camera in someone’s face they are going to behave in a different way than if you simply sit there and talk to them while sketching,” said Bors. “A prose piece about Iraqi refugees would be to depressing for my friends to read, but something drawn will make them take a look,” said Sarah Glidden, a Symbolia contributor. “It’s like a good trick.” Erin Polgreen, the founding editor and publisher of Symbolia, doesn’t make comics. She just happens to love them. “When I was 13 or 14, I used to keep quarters in a pinch jar to buy comics with,” Polgreen said. She is the former managing director of the Media Consortium and a consultant on audience engagement. “She had been talking a lot about graphic journalism over the years and knows more about it than anyone,” said Glidden. “She’s kind of our cheerleader.” In 2011, Polgreen founded the website Graphic Ladies, a kind of group calling card for women in comics. She has organized graphic journalism panels for South by Southwest and the Online News Association.

“I knew for awhile I wanted to do something with comics and then I got my first iPad and had this light-bulb moment — comics look great on an iPad,” said Polgreen. She was able to start Symbolia through grants from the McCormick’s New Media Women Entrepreneurs Initiative and the International Women’s Media Foundation. The grants have allowed her to hire fact checkers and compensate her contributors. (The pay range for a piece is between $200 and $800; rights revert back to the “creator” —Polgreen’s preferred term — two months after publication.) Polgreen has said that at least 50 percent of contributors for each issue will be women. “The lack of women is an ongoing issue in both the journo and comics world, and this is a way to address it,” said Polgreen. She often orchestrates collaborations between illustrators and journalists.

While graphic journalism is a nascent field, Polgreen believes that its audience is already out there. “We’re trying to reach a younger demographic who might be intimidated by 5,000 words of text,” she said. “If you think about our ideal audience like a Venn diagram, I envision it as a mix of obsessive readers of comic books, technophiles, and journalists.”

Not all of the pieces in Symbolia are straight-journalism. Glidden’s piece about Sulaymaniyah, Iraq’s comparatively peaceful northernmost region, is more of a road diary than an article. Glidden visits Freedom Park, with its Ferris wheel and roller-skating rink, and draws teenagers pulling flips off the ramps. In 1988, Sadam Hussein’s cousin ordered a poison gas attack in Halabja, a city in Sulaymaniyah. Glidden replicates a mural composed of 8,830 shards of glass — one for each person killed during the gassing. The comic, with its ominous grayscale palette, underscores the fact that peace in Sulaymaniyah is as fragile as ever. 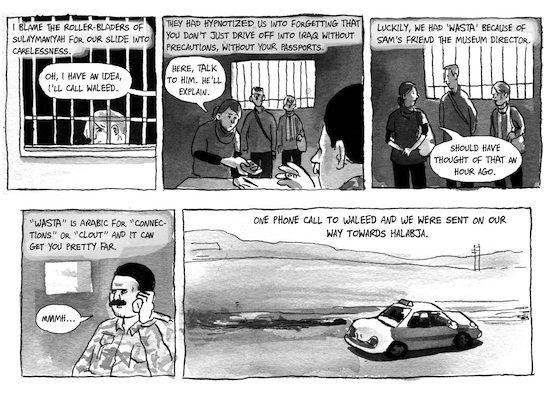 Cagle’s piece about California’s Salton Sea is far more data-heavy. She provides dense captions to her illustrations, such as: “For much of the last millenium, the Salton Sea was more than 20 times larger than it was today” or “After many years of modest growth, Salton City’s population nearly quadrupled between 2000 and 2010.” Her piece includes an annotated map of the region, a spread of the different species of birds found in California’s wetlands, and a line graph of Salton Sea’s salinity over time — the water will be inhospitable to sea life within the next five years. “The 2017 deadline doesn’t seem so close until you are seaside, breathing the thick, rotting air as a haze settles over hundreds of lunching pelicans,” Cagle writes in the final caption over a drawing of Salton’s shore. Cagle’s illustrations are subtler than a traditional cartoon. Her depiction of Salton is neither eerily utopic nor nightmarish. Her drawings capture what people of Salton City look like — their simple, colorful clothes have a low-pressure, vacation-community feel, but their worried expressions suggest otherwise. She relies on quotes to capture the superficial pleasures of affordable, seaside living and uses statistics to show that life there will not continue as is for much longer. 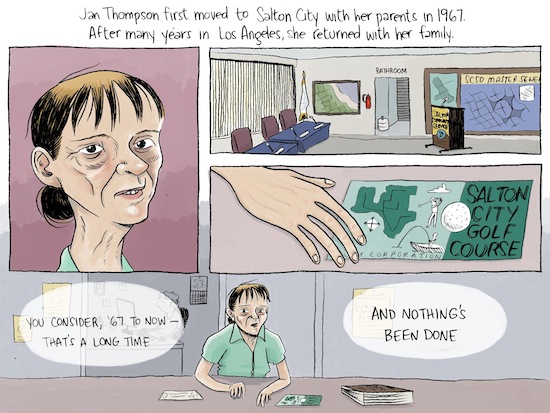 Cagle’s piece strikes an unusual balance of wonky and personal: the graphs are hand-drawn in black ink; the captions are informative but sincere. This aesthetic is common throughout the first issue. “Reading Symbolia digitally will already be a very technically novel experience, so we wanted to incorporate a more hand-crafted feel to make it more personal,” said Joyce Rice, Symbolia’s creative director. To create this handcrafted feel, Rice chose a background texture that mimicked newsprint, a blocky font for the headlines, and watercolor splashes.

Rice’s goals for Symbolia are larger than the publication. “I hope we’re able to raise visibility for this form of storytelling, increase the demand for illustration in publishing, and create jobs for the fantastic illustrators and journalists we’ve had the pleasure of working with,” Rice said. Symbolia offers a new form of visual storytelling. It’s stylish and engaging; its sensibility is vintage but tech-savvy. Symbolia seems timely and contemporary. But the economics of graphic journalism aren’t timely at all. Producing high quality, hand-drawn illustrations is time-consuming and expensive and most news organizations are working with fast deadlines and low budgets.

“How We Survive”; is free, but later issues will cost $2.99. (It’s $11.99 for a yearlong subscription.) Polgreen is working on Symbolia’s business model — she is appealing to advertisers and launching a KickStarter Campaign. She hopes, in time, to turn Symbolia into a monthly publication. “Starting as a bimonthly will give us time to respond to feedback,” she said. 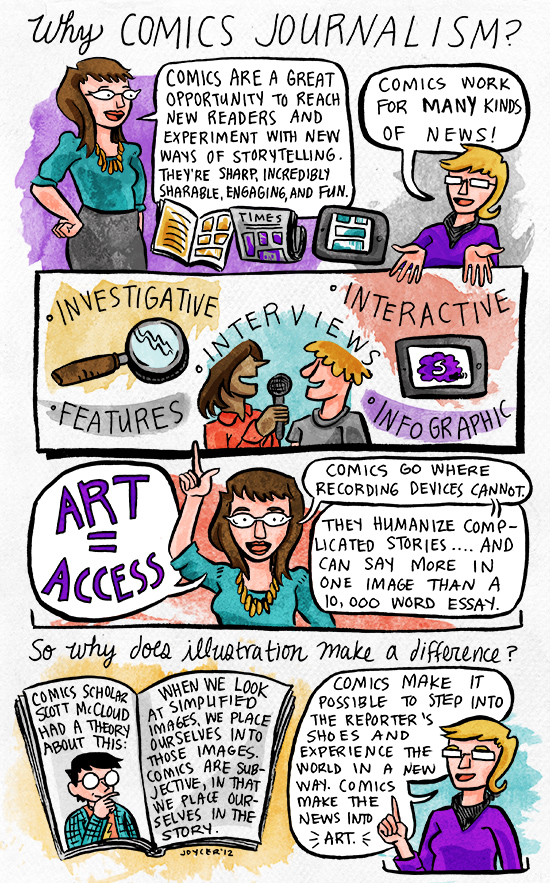 Has America ever needed a media watchdog more than now? Help us by joining CJR today.
Jessica Weisberg is a freelance writer and on the editorial staff of The New Yorker. Tags: comics journalism, graphic journalism, iPad, Symbolia, tablet