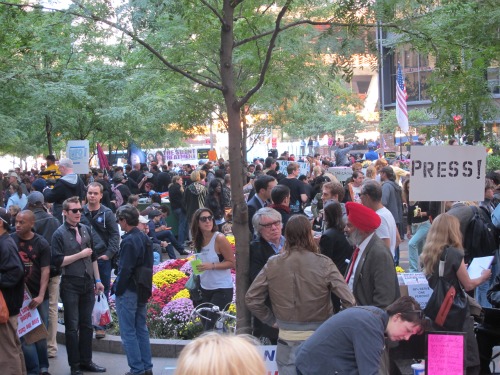 Among the tarps, pizza boxes, and people tightly squeezed into Zuccotti Park, there are subtly segmented sections. There’s the art area, towards the back of the park, overflowing with posters. A buffet style food assortment resides near the center, kitty-corner to the sleeping area, where mattresses and sleeping bags lie, some vacant, some not.

Behind the sign marked “info” sat computers, cameras, generators, wireless routers, and lots of electrical cords. This is the media center, where the protesters group and distribute their messages. Those who count themselves among the media team for Occupy Wall Street are self appointed; the same goes with all teams within this community.

As I tried walking into the media area, which is portioned off with a three foot wall of suitcases, tarps, and containers, a man with “security” printed across his shirt stopped me. After I gave my details, I stepped through the narrow opening. 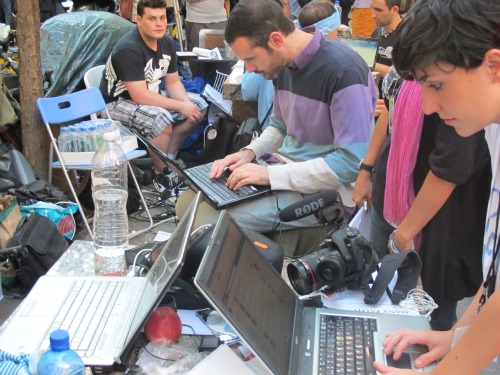 I sat down with Brian Phillips, a former Marine, who quit his job in Washington and hitchhiked to Manhattan to participate. He was wearing a press pass, saying he was a field journalist for a company out of Washington state called Cast Media. He described himself as the communications director and head of security within the media team, and said security is there to keep watch on the stacks of donated computers and other equipment that’s sitting out in the open October air.

Most of the members of Occupy Wall Street’s media team were in a meeting, I was told, one that I would not be allowed to sit in on. Phillips said that as the protest has grown, the media team has been busy coordinating, notably through the “unofficial,” Occupytogether.org. It’s a hub for all Occupy-inspired happenings and updates, a key part of the internal communications network for the Occupy demonstrations. While sitting in the media tent I saw several Skype sessions with other demonstrators. At one point a bunch of people gathered around a computer shouting, “Hey Scotland!” Members of the media team also maintain a livestream, and keep a steady flow of updates on Twitter, Facebook, and Tumblr. 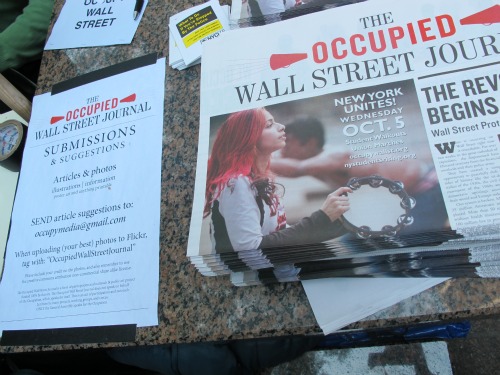 I am told that the media team was not responsible for the print paper that is stacked around, The Occupy Wall Street Journal, and while I’m hard pressed to get a concrete answer about this paper, I later read it was sponsored by donations to Kickstarter, in collaboration with the Indypendent Media Center. These are the last of some 70,000 copies, and there’s a sign up sheet, where people can volunteer to contribute to the next edition. Rumor has it, the second issue will be out next week.

The media team supplies content to post on Occupywallst.org, which Phillips describes as their “frontline for media.” This site contains videos, pictures, and short posts, but remains unofficial, as all things here do, to retain its horizontal hierarchy. It’s this structure that allows anyone to join, and with an ever increasing flow of disenchants, it is not always agreed upon what exactly the message should be. But that’s the point.

Soon after arriving, another internal communications network showed itself. Phillips referred to it as the “people mic.” It begins with someone shouting out, “mic check!” which is then repeated back. A few words at a time, the message is echoed through the crowd, allowing the request or information to spread through to the peripheries of the park. “The cops wont let us use a megaphone or amplification, so we have to yell out what we want to say and then they repeat it back,” Phillips said.

I move on, making my way through the crowd to a sign that reads “Press.” There, I meet Mark Bray, a PhD student at Rutgers, studying European history. This is the public relations table, Bray explains. There has been a “press committee” since the beginning, but this is only the second day that there’s been a designated area for it.

Bray is volunteering as a spokesperson, because he feels he can best serve this movement by articulating its message. He goes on to express a sentiment I will hear throughout my time with the Occupiers; the perception that mainstream media want to present this as extreme, or fragmented, or incomprehensible. “Listen, there are very unusual people here, and I see reporters trying to find the craziest looking person to get a sound bite,” he says. “We’re not trying to prevent these interviews, but we’re just here to provide a thought out answer from the press committee’s perspective.”

Next stop, the internet table, where Drew Hornbein is sitting in front of a sign-up sheet for volunteers. He explains that the internet group is like the media team and press team, a semi-autonomous section of the General Assembly, and their objective “is not the conversation itself, but facilitating it.” Horbein says his team runs the New York City general assembly (NYCGA) webpage.

The NYCGA is the governing body of New York City’s Occupy Wall Street; it meets every evening at 7 pm, where all the committees come and discuss their thoughts and needs. It is open to all who want to attend, and anyone can speak. And while there is no named leader, some of the members do routinely moderate the general assembly meetings. Hornbein and the Internet team update the minutes from every meeting, along with other need-to-know information for organizers.

The big project they are working on now is getting Internet to the park as a whole, which Hornbein says will help, “eliminate the information hierarchy.” He explains that right now, the media area has the computers and the connection, but because “they have a job to do,” it is cut off from everyone else. “We’re trying to create this model society but at the same time we’re recreating some of the bad things,” he says. “Our big concern is to get Internet to the rest of the park.“

The Internet table is in its first day, but Hornbein has been working as part of this committee since July, when the call to Occupy Wall Street first went out from AdBusters. He says he used to work as a freelance graphic designer, but quit as soon as he heard about this protest, “I was working on this dinky little e-commerce site that gets 500 hits a day,” he said. “Now I am working on a site that is getting 50,000 to 100,000.”

As it got closer to the time of the march, almost 3 pm, I headed back over to the media table, hoping that people are back from their meeting. They weren’t, but I do meet Todd Graham, a freelance artist. He has a tag around his neck, with the handwritten words, Todd, Occupy Media Team. He works gathering audio and pictures for the live feed. He tells me that at first, he was skeptical about the demonstration—thrown off by the ambiguity. But he started coming everyday, attending General Assembly meetings, and decided to help. He says media team meetings are usually centered around coordinating where different people like him will be, to make sure they have all points covered, recorded, and beamed to the world.

Graham tells me I must meet Monica Lopez, one of the primary organizers behind the livestream. She traveled from Spain to Wall Street, after spending the last four months demonstrating in Madrid. She says she is a freelance photojournalist, and came to help with the media; she is considered an expert on this topic by other members of the team. While we talk we are interrupted by an electricity crisis:

“The generator is off!” someone shouts. “We need gas for the generators,” the man continues, and Lopez gets up to help.

I see Brian Phillips, the ex-Marine, head over to a microphone, which I am surprised to see since he said the rules were no amplification. “Mic check,” he shouts, to a resounding “mic check!”

“Don’t even say the word riot!” someone in the media area shouts from behind me.

Phillips continues, “Today, Glenn Beck’s followers threatened to kill us. This is a serious issue.”

“No it isn’t!” a voice from the back shouts. “You’re so stupid. Don’t spread this. It’s not worthy of our attention.”

“Dude, at least approve the message before you say something. Seriously. Seriously,” another voice says.

Lopez sticks up for Phillips, “People have to know that people threatened us. It is our right as media to tell them.”

I turn to a man named Justin Wedes, who looks at me and says “just working stuff out” and laughs. He seems to be the only person so far to recognize the name Columbia Journalism Review. Turns out, Craig Silverman wrote about him in a post for CJR, after he concocted a fake press release, and it got picked up by the AP as a real story.

He described the media center as the brain of the camp, “It’s like an information switchboard.” The distrust of mainstream news is another bonding force at Occupy, strengthening the commitment of people here to make sure they counter any messages which brush them off. “We film fox filming us,” he said. “Don’t try to spin it cause we’re watching. The media is here for the self-documentation process.”

The volume level began to slowly rise as the scheduled march began, so I jumped into the fray, walking along side a man name Joseph Wade, an ex-military guy, who is attending Brooklyn College for creative writing and journalism. He started a blog to document these protests, and he’s one of an unknown number of bloggers who have devoted their time to Occupy Wall Street. Another guy I met, named Matt, was there trying to recruit photographers for his venture, Feed the Protest, his attempt at an “accountability portal” for police officers behaving badly. He hopes to collect and tag photos of cops, and organize them into a searchable database. As I am walking, I also meet Mark Yerdas, who is with his young daughter Zora. He said he makes documentary films, and decided to take a train to New York City to make a video diary called This is This, which will document his time here and in Washington, DC at a protest called October 2011.

The crowd quickly started swelling, and I was in the midst of what seemed like 10,000 people. The sea of bodies seemed to have no end and no beginning. Everywhere I looked there were cameras and phones drawn. For a while I didn’t see any members of the media team, but the next day there was a post on YouTube of the “media team” in the back of a police paddy wagon, yet I do not recognize anyone in the video.

After being stuck near a gated off section for about 30 minutes, I had decided to leave, but as I was trying to make my way out, I spotted Todd Graham. He moved through the crowd, headphones on, boom mic on an extender. After saying a quick hello I lost him, his microphone moving with the signs, towards city hall.