Time magazine, in a (tangential) tribute to the erstwhile “most trusted man in America,” recently asked its readers: “Now that Walter Cronkite has passed on, who is America’s most trusted newscaster?”

The options respondents were asked to choose among for the poll were…narrow. To the point of, really, self-delegitimization. Per Time, newscasterly trust is divvied among only the anchors of the Big Three networks—Katie Couric, Charlie Gibson, and Brian Williams—and…Jon Stewart.

Given that, it’s no surprise that Stewart won the thing in a cross-country landslide—not only is the fact that the faux-caster is generally more trusted than his straight-laced counterparts a matter of cliché at this point, but his being the only non-network anchor of the bunch also likely stacked the odds in his favor while the others split the vote. One assumes that Time’s poll—and the interactive map it gave occasion for—were more about making an editorial statement than gathering revealing information.

Still, one burning question remains: Katie Couric, in the poll, took Iowa—and only Iowa—with a whopping 65 percent of the vote. Why??? 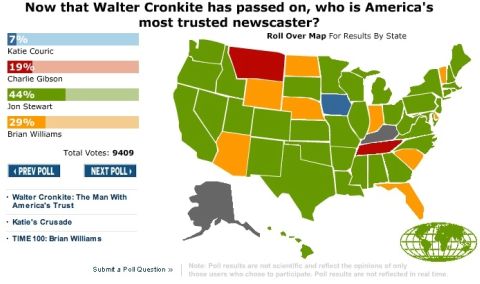 Has America ever needed a media watchdog more than now? Help us by joining CJR today.
Megan Garber is an assistant editor at the Nieman Journalism Lab at Harvard University. She was formerly a CJR staff writer.