On February 21, 1925, The New Yorker debuted. It was founded by Harold Ross, one of the original members of the Algonquin Round Table, and his first wife, Jane Grant, a reporter for The New York Times. Partnering with Raoul Fleischmann, the heir of Fleischmann’s Yeast, Ross set out to create an urbane, cosmopolitan humor magazine. He edited 1,399 issues of the weekly publication, from the first until his death in 1951. Although the magazine maintained its droll wit, it quickly established itself as one of the leading publishers of serious short fiction and journalism.

The New Yorker’s first cover illustration was of a dandy — the now familiar “Eustace Tilley” — taking in a butterfly through his monocle. Inside the covers, the first page of the first issue is an ad for a perfume that no longer exists and the last page is an ad for the tires of a defunct rubber company. But in between, there are some satisfyingly recognizable features: reviews of performances and books, “Goings On,” and “Talk of the Town.” Most of the first issue, however, consists of parodies and other humor pieces akin to the present-day magazine’s “Shouts & Murmurs” section.

Of course, The New Yorker’s archives are online, and you can virtually flip through the first issue for yourself. 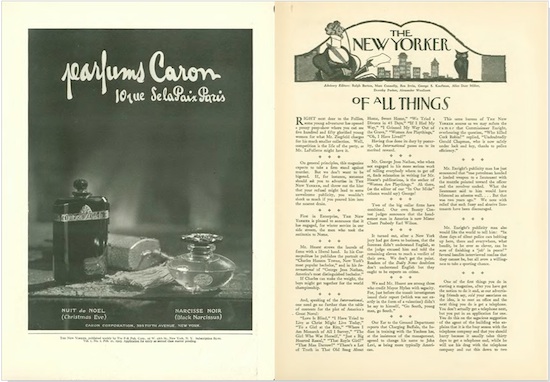