On February 26, 1909, 21 short films were shown at the Palace Theatre in London. It was the general public’s introduction to Kinemacolor, the first successful color motion picture system. A two-color additive process, which involved projecting a black-and-white film behind alternating red and green filters, Kinemacolor was the dominant cinematic-coloring system before World War I.

A demonstration of the Kinemacolor process, circa 1908

Hundreds of Kinemacolor projectors were eventually installed in theaters throughout Britain, the United States, and Japan. Scores of Kinemacolor movies were produced; and for a time, the films were popular — especially in 1911, when audiences were dazzled by color footage of the coronation of King George V. But the company was never a financial success. It was difficult to recoup the expense of installing the special Kinemacolor projectors in cinemas, and the process created conspicuous distortions in images that viewers grew weary of. Moreover, once the novelty wore off, it was the opinion of contemporary filmmakers that Kinemacolor exploited “color for color’s sake” and just didn’t make very interesting features. The company ceased production in 1915.

A hundred years later, Kinemacolor’s most significant bequest to cinematic history is that its Hollywood studio was taken over by rival filmmaker D.W. Griffith. Griffith was shown a Kinemacolor attempt to adapt Thomas Dixon’s widely read, highly controversial novel The Clansman. The film was a debacle and never commercially released, but it inspired Griffith to make his own groundbreaking adaptation, The Birth of a Nation. 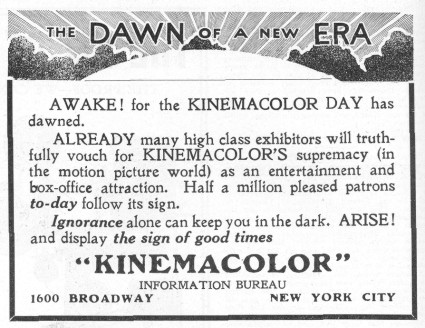 1913 ad for Kinemacolor
Has America ever needed a media watchdog more than now? Help us by joining CJR today.
Sang Ngo Tags: color film, D.W. Griffith, Kinemacolor, The Birth of a Nation