What in the world is The New York Times doing running an op-ed from AEI’s Peter Wallison that perpetuates his thoroughly discredited argument about what caused the housing crisis?

It’s the high/middlebrow equivalent of forwarding on to millions of people a chain email your crazy uncle sent—without even clicking over to Snopes.com.

The Times lends Wallison the most valuable space in journalism to write, speciously, that the housing bubble has returned. Okay. But in doing so it lets him claim yet again that government policies caused the housing crisis—a line so blatantly false that Barry Ritholtz dubbed it the Big Lie of the Crisis. And that’s seriously problematic.

Both this bubble and the last one were caused by the government’s housing policies, which made it possible for many people to purchase homes with very little or no money down. In 1992, Congress adopted what were called “affordable housing” goals for Fannie Mae and Freddie Mac, which are huge government-backed firms that buy mortgages from banks and other lenders. Then, as now, they were the dominant players in the residential mortgage markets. The goals required Fannie and Freddie to buy an increasing quota of mortgages made to borrowers who were at or below the median income where they lived.

No mention of the deregulation that Wallison and AEI pushed or of Wall Street’s massive subprime securities machine or of the global wave of cash searching for return or of shady credit raters or of fraud. It was the gubmint wot done it—all by itself!

This isn’t just wrong. It’s worse than that. Compare what Wallison says now to what he said before the crash.

In 2002, for instance, he criticized the government for not forcing Fannie and Freddie to make “appreciable” subprime loans:

Over both Republican and Democratic administrations, HUD has failed to adopt regulations that would require Fannie Mae and Freddie Mac to use a significant portion of the profits they derive from their government support to add appreciably to the housing finance resources available to low-income families.

Now here’s he writes in the Times today:

In 1992, Congress adopted what were called “affordable housing” goals for Fannie Mae and Freddie Mac, which are huge government-backed firms that buy mortgages from banks and other lenders. Then, as now, they were the dominant players in the residential mortgage markets. The goals required Fannie and Freddie to buy an increasing quota of mortgages made to borrowers who were at or below the median income where they lived.

Through the 1990s and into the 2000s, the Department of Housing and Urban Development raised the quotas seven times, so that in the 2000s more than 50 percent of all the mortgages Fannie and Freddie acquired had to be made to home buyers who were at or below the median income.

Nor was this some one-off comment. It was part of a consistent browbeating of the GSEs and what he called ineffective government policies pushing subprime loans. In 2002, Wallison had this to say:

Study after study has shown that (Fannie and Freddie) are doing less for those who are underserved in the housing market than banks and thrifts. Not only do they buy fewer mortgages than are originated in minority communities, the ones they buy tend to be seasoned and thus less risky. Despite Fannie’s claims about trillion dollar commitments, they are meeting their affordable and minority housing obligations by slipping through loopholes in the loosely written and enforced HUD regulations in this area.

In recent years, study after study has shown that Fannie Mae and Freddie Mac are failing to do even as much as banks and S&Ls in providing financing for affordable housing, including minority and low income housing.

Since 1992, Fannie and Freddie have had an obligation to assist in financing affordable and low income housing. Obviously, doing so would be costly, and would thus reduce their profitability. Studies now show that their performance in financing low income housing—especially in minority areas—is far worse than that of ordinary banks.

In 2001, Wallison put together a book called, Serving Two Masters, Yet Out of Control: Fannie Mae and Freddie Mac (emphasis mine), which he discussed in 2003:

The two masters referred to in the title, of course, were the GSEs’ government mission, on the one hand, and-on the other-the fiduciary duty of their managements to maximize their profitability. I argued that these two masters could not both be served, and the one that was not getting its due was the government mission.

Which is actually correct. The GSEs move into subprime came at the tail end of the bubble as they sought to compete with Wall Street, which had decimated its market share in mortgage securities: 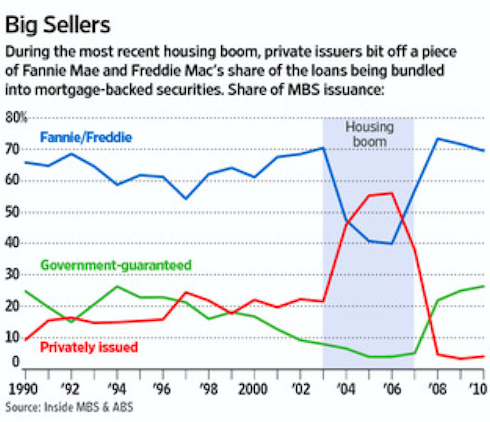 Or perhaps Fannie and Freddie were just responding to Wallison’s persistent demands for them to loosen their standards.

Wallison puts the start of the bubble at 1997, so by the time he wrote all the above, it was well under way.

Wallison, somewhat scandalously, was on the FCIC, and even his fellow conservatives thought he was a crank, rejecting his thesis, and trying to figure out whose payroll Wallison’s AEI comrade-in-arms Pinto—the source of his misleading data—was on.

I get that this is one of those token columns that editorial boards let onto their pages here and there to prove their broad-mindedness, like when The Wall Street Journal runs Bernie Sanders op-eds. Those are good things, typically.

But why the Times would run an op-ed from such a thoroughly discredited figure is beyond me—much less a month after Wallison wrote an op-ed for The Wall Street Journal headlined “Get Ready for the Next Bubble” (in which he slammed Obama nominee Mel Watt for supporting affordable-housing goals).

Wallison also supports his case that “the bubble is back” with fuzzy math.

Housing bubbles, then, become visible — and can legitimately be called bubbles — when housing prices diverge significantly from rents.

Today, after the financial crisis, the recession and the slow recovery, the bubble is beginning to grow again. Between 2011 and the third quarter of 2013, housing prices grew by 5.83 percent, again exceeding the increase in rental costs, which was 2 percent.

Well, yes. but housing prices collapsed from 2006 to the end of 2011, and markets tend to overshoot at the bottom as well as the top. That rental costs and housing prices aren’t marching in lockstep short-term is not necessarily a sign of a bubble, particularly since rents actually rose during the housing crash.

If housing prices outpace rental costs for several years, then you probably have a problem. Price-to-rent ratios have risen sharply in the last several quarters—and they must be watched very closely—but they’re still far, far below bubble levels.

As I wrote last summer, “Bear markets don’t last forever, and not every recovery is a bubble.”

(By the way, a big hat tip to Bill Black for collecting those damning Wallison quotes.)

Has America ever needed a media watchdog more than now? Help us by joining CJR today.
Ryan Chittum is a former Wall Street Journal reporter, and deputy editor of The Audit, CJR's business section. If you see notable business journalism, give him a heads-up at [email protected]. Follow him on Twitter at @ryanchittum. Tags: AEI, Big Lie of the Crisis, housing bubble, Peter Wallison, The New York Times