The New York Times’s landmark metered paywall will be two years old next month, and it’s already successful beyond anyone’s expectations. Its impact is reverberating through what remains of the newspaper industry, as publishers seize on lessons learned by the Times and try to apply them to their own, smaller operations.

And the NYT shows no signs of slowing down yet, with its digital subscriptions reaching 640,000 in the fourth quarter. The paper added 74,000 net new subscribers in the period, more than in any quarter since the first full period after the meter launched, as you can see here: 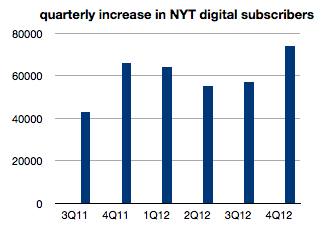 I’ve been guessing that this growth will slow down for a while now, but this is still extremely fast. That 74,000 new subs were a 13 percent increase over the third quarter, and the Times ended 2012 with 64 percent more digital subscribers than it had a year ago. If it were somehow able to keep that growth rate up throughout this year, it would have more than a million online-only subscribers by December.

If that seems like a real stretch, it’s worth noting that fourth quarter growth actually picked up speed from the previous two quarters, which had seen growth of 11 percent and 12 percent, respectively. That’s because the Times is doing a good job of making subscribers out of former Web freeloaders. Poynter’s Rick Edmonds reports that 65 percent of its digital-only subs are new to the paper and another 27 percent had been print subscribers more than three months ago.

The law of large numbers predicts growth will slow, but I said the same thing last March and underestimated the pace of growth, predicting that the NYT would have 629,000 subs by the end of the first quarter of 2013. It looks like the paper will be closer to 700,000 by then. That will mean annual revenue close to $140 million, assuming $195 per subscriber, which is the lowest price point.

But the revenue implications for the Times are even better than that, because the smart paywall strategy has always been about slowing the decline of print, and a paywall enables papers like the Times to boost prices for print without having lucrative subscribers turn into nonpayers online. The paper’s circulation revenue in 2012 was up $90 million, or 13 percent, from the year before, to $795 million. Contrast that to ad revenue, which was just $712 million, down 6 percent from 2011.

As print advertising collapses, it is becoming less and less important to the overall company, and even sharp declines become less meaningful than they were three, four, and five years ago. The Times only has about half a billion dollars worth of print advertising left to lose, and print ads make up one-third of its total revenue, down from two-thirds in 2005. Meantime circulation becomes more and more important. Total ads were down $44 million last year at the Times, but the $90 million increase in circulation revenue more than offset that. All said and done, the Times’s revenue actually rose 2.6 percent last year.

If that sounds like a modest achievement, consider that 2.6 percent is the best revenue number the Times has posted since Bill Clinton was in office, the tech bubble was roaring, and Google sold its first ads, in 2000.

The big question, again, for the Times is whether and when it can get digital ads growing again. They were up just $300,000 in 2012 from 2011 to about $180 million, by my calculations. It’s conceivable that digital circulation revenue could overtake digital ad revenue by the end of this year if trends stay somewhat stable.

That wouldn’t be a good thing. The NYT paywall is a huge victory for the company and for journalism as a whole, but turning that into a sustainable all-digital future for the Times will still require major growth in its non-subscription digital revenue.

This is all real money, but for comparison’s sake, it’s better to look at 52-week periods.

Has America ever needed a media watchdog more than now? Help us by joining CJR today.
Ryan Chittum is a former Wall Street Journal reporter, and deputy editor of The Audit, CJR's business section. If you see notable business journalism, give him a heads-up at [email protected]. Follow him on Twitter at @ryanchittum. Tags: digital subscriptions, future of news, Google, paywalls, The New York Times