At some point, you even have to hold the tabloids to account.

That point is now with the New York Post, which has exhibited reckless and appalling journalistic judgment this week in its reporting on the Boston Marathon bombing.

First the paper reported early in the developing story on Monday that 12 people had been killed in the blasts. It then reported that authorities had a “Saudi national” in custody as a suspect.

Both reports turned out to be false. That’s bad. Pathetic, really. But with the smoke still clearing on a breaking story, mistakes—even serious mistakes—can happen.

But today’s front page of the Post is a black mark in the annals of newspaper history, and it shows that the Murdoch paper deserves no benefit of the doubt. Any pretense of professionalism—as thin as it might have been—is gone.

Here’s the cover (I’ve blacked out part of the kid’s face, which the Post did not do): 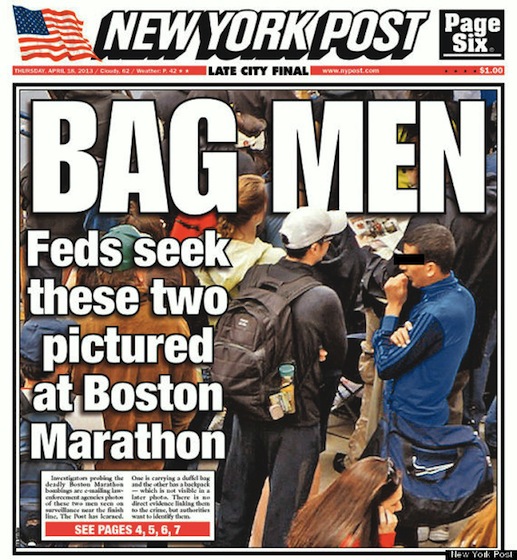 It turns out that authorities are not looking for these two, one of whom is a 17-year-old high school track athlete and the other his coach, at all. Their “pictures were circulated last night in an email among law enforcement officials,” according to the Post’s own lede.

It doesn’t take but about three seconds to figure out what’s wrong with running a story—much less a cover story with a photograph clearly identifying at least one of the pair— based on information that vague. That’s how the sausage is made in chaotic high-profile investigations, like, for instance, 9/11, a small part of which I covered. In a situation like this, investigators get a ton of leads. The vast majority of them do not—repeat, do not—pan out.

These photos popped up on Deadspin on Tuesday in a post written by a guy with no intention of identifying them as suspects. Check out the third photo down, which is a broad view of the crowd, not a cropped, zoomed-in picture of the two males. Another picture showing the two was picked up by Reddit’s crowdsourcin’ keyboard crimefighters and noted by Gawker’s Adrian Chen yesterday with this prophetic comment:

As the New York Post will tell you, any brown people in the vicinity of a bombing are suspect.

Indeed, of the three major Post screw-ups on the Boston story, two of them falsely implicated people from Muslim countries. Here’s what the 17-year-old immigrant kid, who runs track for his high school and works at Subway, told the New York Daily News:

“A lot of people have bags, not just me. I thought, ‘Why me?’” Barhoum said, adding that he was carrying only gym clothes and sneakers in his bag.

“The only thing they look at is my skin color and since I’m Moroccan I’m kind of dark,” he said. “Last night I couldn’t sleep. Just thinking about the consequences. What are people going to say and what the result is going to be.”

And that was only in response to the Reddit crowdsourced smearing. Little did he know he’d be on the front page of the New York Post this morning as one of the “Bag Men.” Disgraceful.

Compounding the matter is this disingenuous statement Post Editor Col Allan gave today to the Washington Post after it became clear the paper had gotten it very wrong:

We stand by our story. The image was emailed to law enforcement agencies yesterday afternoon seeking information about these men, as our story reported. We did not identify them as suspects.

Please. And you ran the photo because…? The Post did everything but call them suspects:

In the photos being distributed by law-enforcement officials among themselves, one of the men is carrying a blue duffel bag.

Actually, that’s not quite true that the Post didn’t call them suspects. As The Smoking Gun points out, another Post photo of the pair is slugged “suspect—525x415.jpg” online. 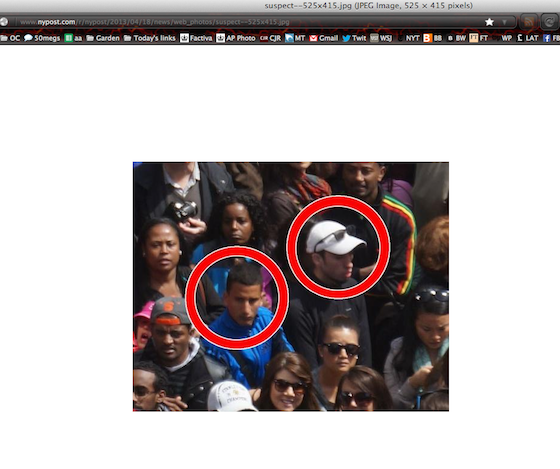 It’s horrifying that two young people out to cheer on marathon runners can end up as “bag men” on the cover of the New York Post because of their ethnicity. If there’s any consolation, it’s that it’s not hard to imagine these guys getting a very large check from Rupert Murdoch in the not-too-distant future.

We don’t usually call for firings around here. In fact, I can’t recall The Audit ever doing so. But heads need to roll at the New York Post over this, starting with Allan’s.

Has America ever needed a media watchdog more than now? Help us by joining CJR today.
Ryan Chittum is a former Wall Street Journal reporter, and deputy editor of The Audit, CJR's business section. If you see notable business journalism, give him a heads-up at [email protected]. Follow him on Twitter at @ryanchittum. Tags: Boston Marathon, libel, New York Post, Rupert Murdoch, terrorism