Peter Ferrara, currently of the climate-change denying Heartland Institute and formerly of Jack Abramoff’s payroll and the Reagan and Bush I administrations, writes for Forbes that Mitt Romney will cut middle class taxes, no matter what Barack Obama’s attack ads say.

Maybe so, but since Romney’s plan is mathematically impossible, the candidate doesn’t get the benefit of the doubt.

Romney’s bad math and conflicting promises are what allowed Obama to create ads that misleadingly assert that Romney would raise taxes on middle class families by up to $2,000. Romney has pledged to cut tax rates by 20 percent across the board while not losing any tax revenue. The Brookings Institution’s Tax Policy Center analyzed Romney’s proposal and said to get revenue neutrality, he’d have to raise taxes on middle class up to $2,000.

I don’t know the future any better than Ferrara (last seen at The Audit talking about how economic growth is “hip” and mangling his facts) does, much less the future positions of a politician whose undergone as many radical transformations as Mitt Romney, but either the middle class tax cuts have to go or the “revenue neutral” part of the plan has to go.

You can have your own opinions on the future, of course. But you can’t misstate the historical record to make your economic case, and that’s what Ferrara does in this column. And I thought it was worth picking apart since he perpetuates a commonly held belief here:

That reprises Reagan’s 1980 campaign proposal to cut tax rates across the board by 30%, which was enacted in 1981 as a 25% income tax rate cut for everyone. Those sweeping tax rate cuts helped spawn the greatest economic boom in world history over the next generation, 1982 to 2007. That boom is now an established, recorded, factual result, and, therefore, is not an issue over which reasonable people can differ.

But that’s not all. Ferrara’s “Reagan boom” was goosed on a flood of debt, both from the financialization of the private sector and from deficit spending you might call Keynesian, even. 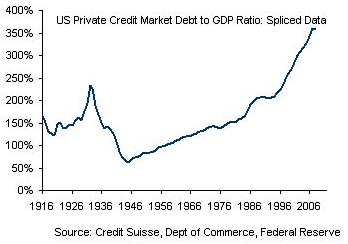 In 2012 dollars, total private sector and government debt in the U.S. rose from $13.3 trillion in 1982 to $54.2 trillion in 2007, according to Federal Reserve flow of funds data. To put that $39 trillion increase in perspective, real GDP over that time totaled $243 trillion. The country leveraged up to the gills to finance economic growth during Ferrara’s “Reagan boom” and we’re paying the price now with a depressed and deleveraging economy.

My favorite part of this piece though is this bit of self-aggrandizement from Ferrara in comments to his post (emphasis mine):

But thank you for your recitation of the Obama campaign talking points. They have been monitoring this column because they fear what it has been saying and I see they are ramping up the standing of those assigned to comment on it.

I’m kind of fascinated by these DC creatures, the “wingnut welfare” cases, as the lefty bloggers call them, who perpetuate these zombie lies. Here’s Ferrara’s bio of current jobs: “Director of Entitlement and Budget Policy for the Heartland Institute, Senior Advisor for Entitlement Reform and Budget Policy at the National Tax Limitation Foundation, General Counsel for the American Civil Rights Union, and Senior Fellow at the National Center for Policy Analysis.”

Has America ever needed a media watchdog more than now? Help us by joining CJR today.
Ryan Chittum is a former Wall Street Journal reporter, and deputy editor of The Audit, CJR's business section. If you see notable business journalism, give him a heads-up at [email protected]. Follow him on Twitter at @ryanchittum. Tags: campaign coverage, Forbes, Peter Ferrara, taxes, Washington