The Los Angeles Times drops into the debate over whether or how much prices would have to rise at fast-food restaurants for their employees to get $15 an hour.

Actually, this is the first time I’ve seen the question of whether prices would rise treated seriously. Even the bad-math types we’ve seen in the last few weeks have always assumed some price increases.

But the LAT runs with this dumb-question headline:

Writing about the burgeoning protests by low-wage workers for a $15 an hour wage, the paper writes this:

That raises the question: If they’re successful, will burger prices soar?

Expert opinion is mixed. The current federal minimum wage is $7.25 an hour. More than doubling that level would be an unprecedented leap.

Sylvia Allegretto, a labor economist and co-chair of the Center on Wage and Employment Dynamics at UC Berkeley, said it’s unclear whether a minimum wage bump would have enough of a ripple effect to affect consumer wallets.

“Many people have assumed that if you increase the minimum wage by X percent, the meal costs will increase by the same percent, and that’s simply not true,” she said. “There are so many other factors at work.”

No, expert opinion is not mixed on whether doubling minimum wages would “affect consumer wallets,” even if the LAT found one academic to sort of say so. If labor costs doubled suddenly, restaurant owners would have to raise prices significantly in order to stay in business. It’s just math.

Last week, I moved to the workers’ paradise of Denmark, where I will man the Audit Aalborg bureau for a year while my wife is here on a Fulbright. One of the things that’s striking here is the disparity between the cost of food at restaurants and at grocery stores. The minimum wage in Denmark (ADDING: I should say that this is an effective minimum wage negotiated with unions, not a legal one) is roughly $20 an hour (though teenagers can earn somewhat less). Not coincidentally, labor-intensive restaurants have very high prices, while less-labor-intensive grocery store prices are much less shocking.

The average full-time equivalent McDonald’s employee in Denmark makes about $45,000 a year in total compensation. Forty-five thousand dollars! Even after high Danish taxes, that average worker will take home some $28,000 a year, roughly double what a full-time American McDonald’s worker will. To add insult to injury, the Dane gets at least five weeks of paid vacation while the American is lucky to get off (unpaid, of course) when her daughter is home sick with the flu.

And so at the Aalborg McDonald’s, for instance, a Big Mac extra value meal costs 58 kroner, or $10.25, while the Dollar Menu is the 10 kroner menu, which means it’s the dollar-seventy-seven menu here. In Denmark, taxes are included in list prices, unlike in the US, so backing out the 25 percent VAT gives us $8.20 for a Big Mac meal and $1.41 for the “dollar” menu. That compares to $6 and $1 in Seattle.

According to Bloomberg View’s Caroline Baum, such a high minimum wage should mean that scads of Danes can’t find work because it “violates the most basic principle of economics”: the law of supply and demand.

Of course, Baum is empirically wrong. Denmark’s unemployment rate is 6.8 percent, despite its close ties to the depressed eurozone. That’s well below the 7.4 percent rate in the US, where the minimum wage is $7.25. The labor participation rate for working-age Danes is 64.4 percent, which means Danes are more likely to work (despite their super-generous welfare state, which includes earlier retirement) than working-age Americans, 63.6 percent of whom work. And amongst teenagers and those aged 20 to 24—the group most likely to have low-paid jobs—far more Danes work than Americans, as this Bureau of Labor Statistics chart shows: 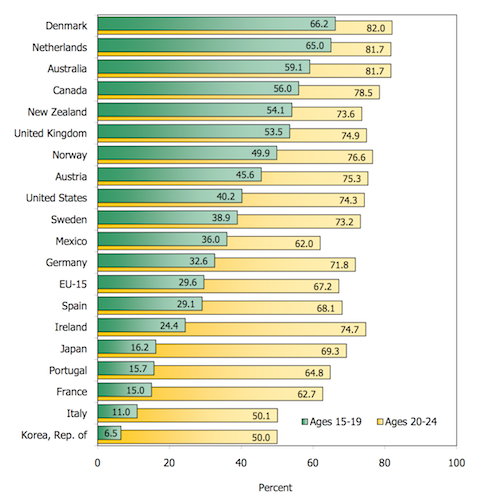 Baum ignores the fact that higher wages for lower workers means dramatically increased demand for goods and services from them, and it incentivizes work. McDonald’s Corporation itself understands this, though it would never, ever say it in English. This is from its Danish annual report (thanks Google Translate!):

A very large proportion of the 3,904 employees are thus not employed full-time PA, but if you convert employment for them full-time positions, equivalent to 2,040 full-time jobs. This means also that McDonald’s spent 559 million. per annum, salary and pension in 2011.

It is money that, for the vast majority of whom, in addition to going to tax also goes to consumption, thereby helping to stimulate economic activity in Denmark.

Alas, rather than figuring any of this stuff out itself, the LAT just turns its piece into a he said/she said story, dialing up Michael Saltsman of Rick Berman’s restaurant-lobby front, the Employment Policies Institute. Worse, the LAT doesn’t tell readers anything about how their neutral-think-tank-sounding expert is actually an anti-labor industry shill.

This is a critically important issue, and it deserves much better coverage than that.

A Big Mac miss by The Huffington Post. Poor reporting on a “study” by a Kansas undergrad.

Has America ever needed a media watchdog more than now? Help us by joining CJR today.
Ryan Chittum is a former Wall Street Journal reporter, and deputy editor of The Audit, CJR's business section. If you see notable business journalism, give him a heads-up at [email protected]. Follow him on Twitter at @ryanchittum. Tags: Big Mac, Denmark, labor, McDonald's, wages