Gretchen Morgenson of The New York Times reports this morning on new criminal charges against robosigning company DocX and its founder—what could be a big development in the foreclosure scandal.

It’s not Obama’s Justice Department bringing the charges. Missouri Attorney General, Chris Koster will after a grand jury issued indicted the company and Lorraine O. Brown on 136 counts—many of them felonies:

“The grand jury indictment alleges that mass-produced fraudulent signatures on notarized real estate documents constitutes forgery,” Mr. Koster said in a statement. “Today’s indictment reflects our firm conviction that when you sign your name to a legal document, it matters.”

What’s DocX? Remember Linda Green, the employee who supposedly signed tens of thousands of foreclosure affidavits? Here’s a graphic the Washington Post put together in the early days of the scandal, showing how clear it was Linda Green was not signing all the documents DocX and LPS said she was: 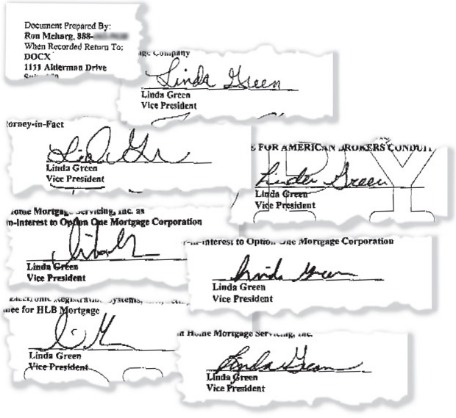 Green was written in as vice president of twenty different banks, and 60 Minutes tracked down the original Linda Green in Georgia, plus a couple of fake Linda Greens:

The real Linda Green didn’t want to be interviewed. But she said that some of the bank vice presidents at Docx were high school kids. Their signatures were entered into evidence in untold thousands of foreclosure suits that sent families packing.

Her name figures prominently in the Missouri indictments, Morgenson reports:

The Missouri grand jury found that the person whose name appeared on 68 documents executed on behalf of a lender — someone named Linda Green — was not the person who had signed the papers. The documents were submitted to the Boone County recorder of deeds as though they were genuine, Mr. Koster said.

The business has a fast metabolism; as described in an in-house newsletter published in September 2006 by Fidelity National Foreclosure Solutions, a predecessor of LPS, a single 18-person “document execution” team brings Henry Ford’s mass-production techniques to the foreclosure business. “The document execution team is set up like a production line, ensuring that each document request is resolved within 24 hours,” the newsletter said. “On average, the team will execute 1,000 documents per day.” That was four years ago, when the foreclosure rate was a quarter what it is now.

It was when some of those documents proved difficult to track down that trouble set in. If a foreclosure lawyer working on behalf of a bank or servicer asked LPS for an errant mortgage, for example, some company workers may have gone to extremes to keep the foreclosure assembly line moving, according to prosecutors and plaintiffs’ lawyers. The Florida attorney general’s office has alleged that in some cases, corners may have been cut, signatures forged, documents backdated. Industry employees have said in sworn depositions that “robo-signers” executed paperwork without reviewing it.

I’m surprised it has taken this long for someone to go after them. While this is clearly good news for borrowers and bad news for LPS, I doubt that anyone at the banks will feel threatened by this action. Unless this action leads to further prosecutions, it only scrapes the surface of bad conduct in the mortgage arena.

It’s too much to hope for, but it would be nice if a prosecution like Missouri’s actually helped the public find out the full extent of what happened here.

Has America ever needed a media watchdog more than now? Help us by joining CJR today.
Ryan Chittum is a former Wall Street Journal reporter, and deputy editor of The Audit, CJR's business section. If you see notable business journalism, give him a heads-up at [email protected]. Follow him on Twitter at @ryanchittum.