The newspaper industry continued to sink last year, shedding 2.6 percent of its revenue on heavy print ad declines, according to the Newspaper Association of America.

Dog bites man, you say. But while we’ve become numb to the collapse of the newspaper industry’s fortunes, it’s worth stepping back and looking at how bad it’s been for what is still far and away the biggest component of our newsgathering apparatus.

Here’s a chart I made five years ago showing inflation-adjusted newspaper advertising revenue. Back then the headline was, “Newspaper Industry Ad Revenue at 1965 Levels”: 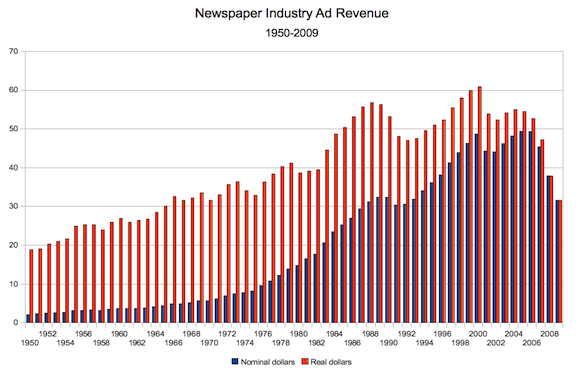 Today’s version would be “Newspaper Industry Ad Revenue at 1950 Levels”: 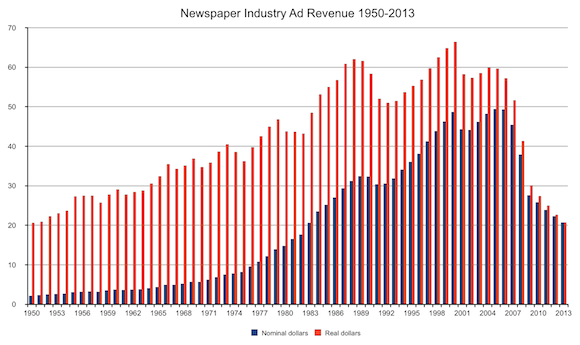 (UPDATE 4/25: I’ve fixed the original chart I had here, which had some outdated numbers. The updated ones are slightly worse, and ads were at 1950 levels last year and are probably already at a record low run rate for this year.)

Soon, probably this year, newspaper ad revenue will fall to the lowest on record.

Alan Mutter writes this (about his own chart tracking the decline of newspaper ads and the rise of online advertising more broadly):

The reason the above chart starts in 2005 is because that is the year that advertising at the nation’s newspapers hit an all-time high of $49.4 billion, according to the Newspaper Association of America, an industry-funded trade group.

That’s right. Fully a decade after us mere mortals became aware of the Internet, ad sales continued to surge at newspapers, leading publishers to believe this upstart medium was no challenge to the power, prestige and enviable profitability of their brands.

They show no sign of slowing down either. In real terms, newspapers lost 10 percent of their overall ad revenue last year, which is in line with the 12.4 percent average annual losses since 2007: 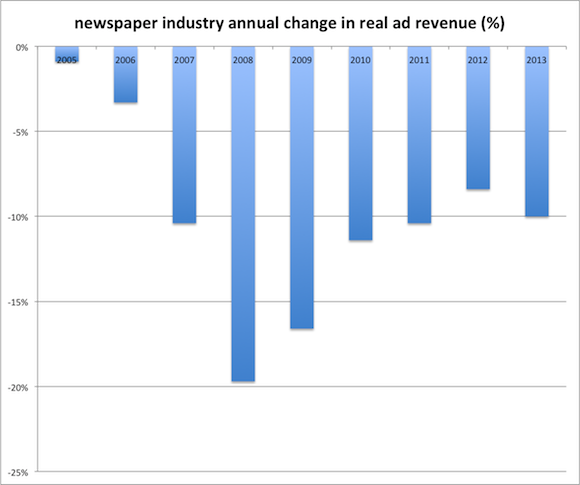 That’s compounded by the fact that newspapers’ digital ad performance has been even worse than expected: 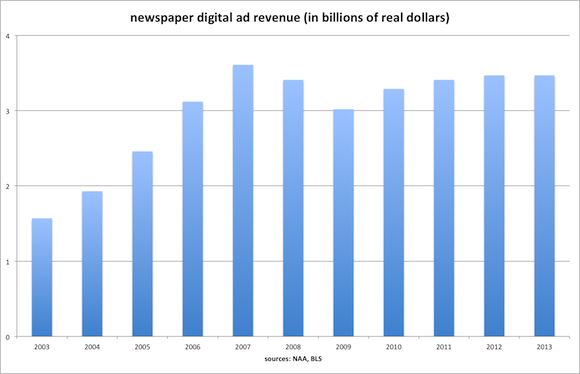 The industry’s digital ad revenue is actually below where it was in 2007 in real terms. How is that possible? It’s because much of that earlier revenue wasn’t really digital. Newspapers sold digital ads as so-called upsells bundled with print ads, and that obscured the true demand for digital advertising, which was much less than papers pretended. As print ads collapsed, so did the upsells, and digital ad revenue got dragged down too.

A better measure would be digital-only ads, but we don’t have much data there. The NAA says they rose 14 percent last year, compared to 1.5 percent for all digital ads.

The only real bright spot for the industry was in subscriptions, where the industry added $430 million in circulation revenue, thanks to paywalls and all-access strategies. The paywall shift has added $890 million in revenue in the last two years. That’s nothing to scoff at, but it’s a real increase of just 2.8 percent a year and it hasn’t come close to offsetting ad declines.

It’s doubtful that newspapers will be able to maintain 4 percent growth rates in circulation for very long, if at all. Much of the increased revenue has come from raising print prices by putting up paywalls and adding digital access. Those are largely one-time gains.

There’s nothing much else out there that’s growing. The NAA’s “new/other revenue” category rose 5 percent to $3.15 billion.

And so the newspaper industry shed another billion dollars in revenue last year, and there’s no end in sight.

Has America ever needed a media watchdog more than now? Help us by joining CJR today.
Ryan Chittum is a former Wall Street Journal reporter, and deputy editor of The Audit, CJR's business section. If you see notable business journalism, give him a heads-up at [email protected]. Follow him on Twitter at @ryanchittum. Tags: digital subscriptions, future of news, NAA, newspaper industry, paywall