Leah McGrath Goodman tells Felix Salmon this about her controversial Newsweek piece on the founder of Bitcoin:

“If I read my own story, it would not convince me,” she says. “I would have a lot of questions.”

And that sums up the problem with Newsweek’s piece claiming to out Satoshi Nakamoto: Newsweek, by its own admission, didn’t prove its assertion promised on its cover that this Satosh Nakamoto is the Satoshi Nakamoto.

Goodman has been taking the heat on this, and some of it is truly vile. Whatever else happens, the Goodman experience should be added to a growing file of cases demonstrating why the internet is a more hostile place for women journalists than their male counterparts.

But let’s be very clear: The Newsweek story is an editing problem, not a reporting problem.

For what it’s worth, I think (and hope, actually) that Newsweek probably has its man. But I’m nowhere near 100 percent certain about it, much less 90 percent. And if you read Newsweek’s piece carefully, you can see the uncertainty is in there too:

Standing before me, eyes downcast, appeared to be the father of Bitcoin…

Of course, there is also the chance “Satoshi Nakamoto” is a pseudonym…

Calling the possibility her father could also be the father of Bitcoin “flabbergasting,”

While Goodman certainly lays out her case for it, nowhere in the body of the piece does she say that Dorian Nakamoto is the founder of Bitcoin. It’s the headline on the cover that does that. 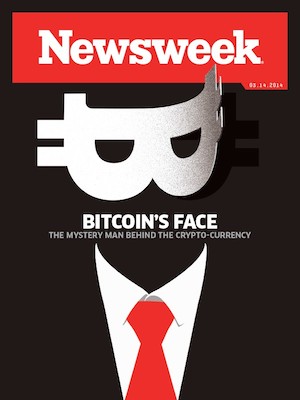 Even assuming Newsweek has Dorian Nakamoto’s disputed admission correct and there was no misunderstanding, it still wouldn’t have conclusive proof that he invented Bitcoin. But it’s the temptation of headline writers everywhere to overplay what you’ve got. That temptation is much stronger when you’re trying to make a splash with a magazine launch. In journalism, we talk about bulletproofing a story and this one certainly isn’t bulletproof, at least as presented.

As Felix said the other day, “the responsible thing to do, from Newsweek’s perspective, would have been to present a thesis, rather than a fact.”

In this case simply adding a question mark to the headline would have been the way to go, along with some more explicit hedging in the actual piece. The bitcoin/redditor types would still be outraged about even attempting to find Satoshi. But Newsweek wouldn’t have been asserting a fact it couldn’t conclusively prove.

The Newsweek/bitcoin affair shows how much more accountable news organizations are than they ever were before. In other eras, news organizations saw stories go sideways, but they always had huge advantages over people who might want to complain. Most of the complainants were obscure, and the news organizations were famous and let’s just say it helped to own the means of distribution. Getting a complaint publicized was always an uphill struggle. Now, a piece can be shouted down by sheer volume on Twitter, which can also pass along humorous and deeply skeptical line-by-line annotations on News Genius.

It’s worth pausing here to note that Bitcoin is not a case of grievous error, like Wen Ho Lee, which eventually came back to haunt The New York Times. So far, this is a case of a story not proved, at least to the satisfaction of many, and it may stay that way for some time.

But one thing we know for sure: The days of “trust us” journalism, for better or for worse (but mostly for better), are long gone.

Has America ever needed a media watchdog more than now? Help us by joining CJR today.
Ryan Chittum is a former Wall Street Journal reporter, and deputy editor of The Audit, CJR's business section. If you see notable business journalism, give him a heads-up at [email protected]. Follow him on Twitter at @ryanchittum. Tags: Bitcoin, doxxing, Leah McGrath Goodman, Newsweek, Satoshi Nakamoto