Newspaper advertising will almost surely fall to the lowest level on record this year, as ads continue to migrate to the Web.

Meanwhile, reader revenue—subscriptions and newsstand sales—is the industry’s rare bright spot, with circulation sales rising the last two years thanks to digital-subscription packages. Even before the paywall movement took hold three years ago, circulation revenue was fairly stable. Or at least it seemed that way: But inflation has obscured the fact that the industry’s real circulation revenue has also been tumbling and is lower today than it was nearly 60 years ago. And a clearer look at that gives us insights into advertising, as well.

Here’s a chart based on Newspaper Association of America data that tracks reader revenue since 1956: Somewhat surprisingly, real circulation revenue peaked 40 years ago in 1974, nearly returned to that level in 1987, and then began a 24-year decline that brought it to record lows. Even with the upturn in the last two years, it’s still down a quarter over the last decade and well below where it was in 1956, when the population was a bit more than half today’s size.

Which raises the question of what newspaper circulation per capita looks like. The overall circulation gains of the post-war era, which peaked in 1984, obscured a steep decline in the average person’s newspaper purchases, which were caused largely by the rise of television and the resulting decline of afternoon papers. While the pace of decline was fastest from 2003 to 2009, per capita circulation in the US has been declining since recordkeeping began just after World War II: That’s a reminder that television was the newspaper’s first mortal enemy. But while TV killed off most of the afternoon papers, that opened the way for newspapers’ golden age, when monopoly profits funded newsrooms across the country at a size that will never be seen again.

Of course, more people than ever read newspapers now online than they ever did in print (although physical circulation figures don’t account for the fact that multiple people read each copy). The problem is, they spend a fraction of the time they once did on print papers. Somebody who reads a print paper 30 minutes a day is worth vastly more than one who reads the paper’s website 30 minutes a month, which is what the average unique visitor spends.

That’s why newspapers are focusing on core readers—the 5 percent or so of their heaviest users. The core appeal of the meter model is capitalizing on heavy readers while collecting bits of ad revenue from the majority of unique visitors that have little or no loyalty to your site.

Ken Doctor has written about how reader revenue comprises a much bigger part of newspaper sales than it did a decade ago. And while paywall and all-access strategies have helped boost the reader-revenue ratio in the last couple of years, the trend is primarily due to the torrid pace of ad declines.

The rule of thumb in newspapers used to be that they got four dollars of ads for every dollar of circulation. Back in 2005, the ad-to-subscription ratio peaked at 4.6 to 1. Now it’s 1.9-to-1, which, while a record low, is actually fairly close to where newspapers were until the late 1970s: 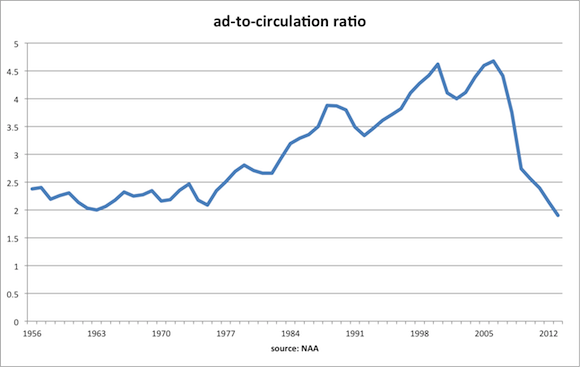 It’s striking how much less dependent papers were on advertising before the 1980s than they were during and afterward. The rise of advertising was largely due to the decline of newspaper competition, which has fallen steadily since the late 1970s (the number of dailies is down about 22 percent in the last 35 years).

The last paper standing in a market could charge readers the same or less while corralling much of its former competitor’s advertising. While that was fun for a while, it undermined the long-term health of the industry. Newspapers became structurally dependent on sky-high advertising rates, ones that a true market couldn’t support.

These were no flukes: Newspapers raised their ad rates three times as fast as inflation from the early 1970s to the late 1980s, the newspaper analyst John Morton told Barron’s in 1990.

For three decades, newspapers were effectively in a bubble market, one that was obscured by the fact that they made money hand over fist thanks to a temporary, artificial market dynamic (the bubble metaphor isn’t precise since newspapers really were making scads of money at the time). Fifteen years ago, for instance, The New York Times Company paid $419 million (adjusted for inflation) for a 100,000-circ paper in Worcester, Massaschusetts. It changed hands last week for between $7 million and $15 million.

The next chart shows this “bubble” clearly. Look at how much money newspapers took in annually from each unit of circulation, which is basically subscribers plus newsstand sales, or in tech terms, ARPU (I’ve used daily circulation for these calculations): 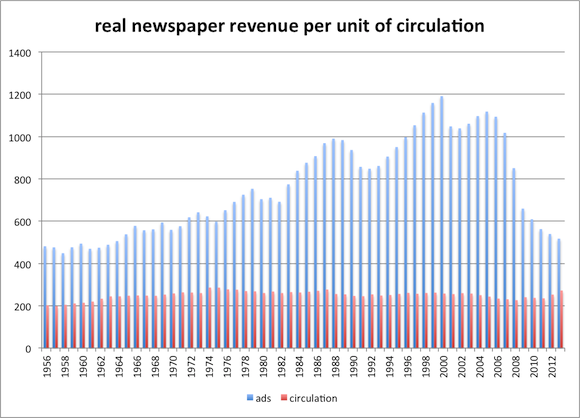 Note how relatively steady circulation dollars per reader have been, particularly compared to ads. Here’s one that stacks the two to show total revenue per unit: 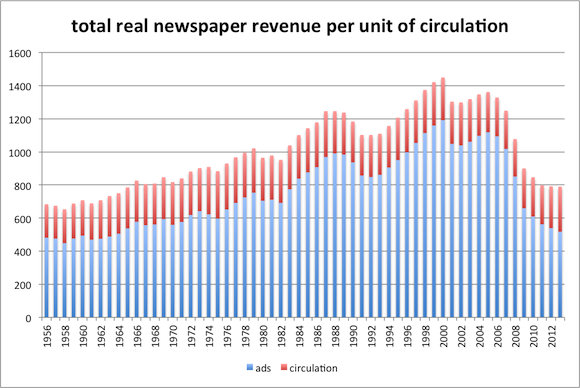 At the peak in 2000, the newspaper industry was hauling in $1449 a year per customer. And that doesn’t even include “other” revenue like third-party printing and rights fees. (A note on that: “Other” revenue now is a significant part of overall sales, accounting for more than 8 percent of total revenue. Unfortunately, NAA data on that begins just a couple years ago so it’s not clear how much that has risen or fallen over the decades).

Facebook’s average revenue per user in the US, by the way, is less than $6. But Facebook can make billions off that because of its massive scale and because its cost of content is zero.

Journalism, broadly speaking, has always required reader revenue, and now it will more than ever.

Has America ever needed a media watchdog more than now? Help us by joining CJR today.
Ryan Chittum is a former Wall Street Journal reporter, and deputy editor of The Audit, CJR's business section. If you see notable business journalism, give him a heads-up at [email protected]. Follow him on Twitter at @ryanchittum. Tags: charts, circulation, future of news, inflation, paywall