The gutting of New Orleans beloved Times-Picayune and Advance Publications’ plan to turn it into a sort of major market AnnArbor.com looks set to bring journalism built on “motion for motion’s sake… volume without thought” to a city built on doing the opposite.

For the Newhouses, who own the Times-Pic, the Hamster Wheel is a business model—one the absentee chain owners are trotting out across the country like McDonald’s with a new chicken sandwich. They unveiled the “constantly updated blog, which gives equal play to impaled cyclists and rabid skunks as it does to politics and crime,” in Micheline Maynard’s words, in Ann Arbor, expanded it (in a somewhat less radical model) throughout Michigan, and are now launching it in the South.

In September, New Orleans will become the biggest American city without a daily newspaper, but Advance will also turn three of its Alabama papers into non-dailies (including The Huntsville Times, where I interned back in 2001). I’m guessing wood shavings are en route to The Oregonian and Plain Dealer as we speak.

I’m all for whatever we can do to support the biggest, most robust newsrooms we can get, mind you. If that means not printing money-losing Monday and Tuesday editions of the print paper, so be it. If that means shutting down the presses entirely, go for it.

But what Advance looks like it’s doing here is disinvesting in journalism behind a digital smokescreen. Here’s The Gambit a couple of weeks ago:

According to sources who were in meetings with editor Jim Amoss, the reporters/content providers have been told to gather information and post it online as it comes in, rather than filing traditional long-form stories. They will be providing updates throughout the day on NOLA.com and other platforms such as Twitter, and expected to take photos and video as circumstances warrant to augment the content they file online — though this information-gathering will supplant, not replace, the paper’s photographers.

The Times-Picayune and Co. will just have to do more with less, as newsroom bosses like to say. Actually, the bosses at Nola.com or the Times-Pic or whatever it’s called now are saying that explicitly earlier this week:

When the NOLA Media Group launches this fall, we plan to produce more content for our print readers and online users than ever before.

That was one day before the ax fell on nearly half of its 173-person newsroom, reducing it to 89 journalists. The Times-Pic reports that forty new people will be added (presumably lower-wage, inexperienced types).

If so, it would leave a newsroom of 129 or so cranking out more content than 173 had been producing, the newsroom will have lost much of its institutional memory, and the quality of the journalism will be far lower than it is today. At least the Times-Pic brass was self-aware enough not to promise “more and better” content.

What will this new “digital-first” focus mean for Nola.com/Remains of the Times-Picayune?

John McQuaid, who worked there for 16 years, has has had some of the best takes of anyone on this mess, and he writes this in The Atlantic:

While the local controversy has focused on the loss of daily publication, something more disquieting has been overlooked: Advance’s Internet strategy has never been about journalism or news. It’s about clicks.

Nola.com is one of a bunch of regional web portals Advance has created. They’re like local versions Yahoo.com or MSN.com. All have the same generic design template. They are run independently of the affiliated local newspapers, sometimes by non-journalists, and it shows. They are generic, ugly and notoriously hard to navigate. They share DNA with Parade.com (the website of Parade Magazine, the newspaper insert) another Advance property whose former boss now runs Advance’s local digital strategy. They present news in a rolling blog format, as it is fed to them, without regard to its importance or community interest. In this framework, news is primarily a click-generating engine, featuring movie listings, weather forecasts, or the doings of the Kardashians.

That sounds about right to me, but the proof will be in the (bread) pudding.

The tragic thing about this mess is that the Times-Pic isn’t some AP-filled shell of its former self—even if its newsroom has been seriously scaled back over the last several years—and it isn’t even losing money. Its reader penetration is 75 percent, the highest of any big city in the country.

My wife happened to be in New Orleans the week the new strategy was announced and she brought me three days of newspapers. The paper still has a rich news report. On May 31, a Thursday edition that will no longer exist under Advance’s plan, I counted more than 50 staff or contributing bylines and columns and roughly 30 staff photographs.

The previous day’s edition fronted a stunning photograph by the paper’s Michael DeMocker, who captured a man comforting a five-year-old, Briana Allen, as she bled to death, shot at a birthday party. Photographer Ted Jackson photographed a dazed woman resting on her porch after sweeping up the blood. 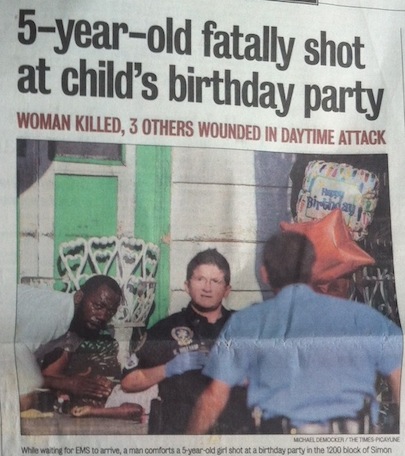 In exchange for this, and a still-profitable daily newspaper operation, Advance and the Newhouses are doubling down on this: 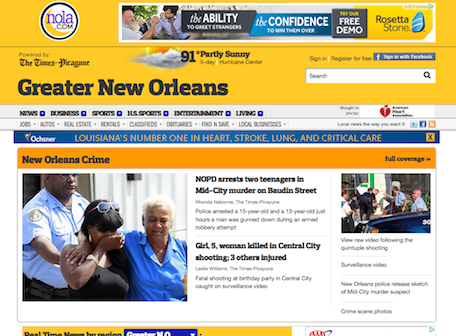 All right, all right. Advance Publications did respond to reader outrage and switched the “yellow journalism” of Nola.com to a less garish shade several days back, but this is the company behind the The Oregonian’s website in super-wired Portland and MLive.com. Point is, the digital brains behind this website, which nobody I’ve seen thinks is any good, are what the Newhouses are betting the franchise on.

Because Advance is privately held, it’s difficult to get a good grasp on what’s happening here. But here’s what’s been reported: The Times-Picayune, as currently constructed, makes money, though we don’t know how much. At about $5.7 million last year, digital ads brought in just 8 percent of total ad revenue (which seems low), according to analyst estimates reported by Advertising Age. I’d estimate that the Times-Pic brings in at least $25 million to $30 million a year in circulation revenue.

While smart papers have been going to a digital subscription model, and smarter papers have moved toward a hybrid model that blends digital and print subscriptions and incentivizes readers to subscribe to the lucrative Sunday print edition, the Times-Picayune never even tried a meter model or leaky paywall. And it actually penalizes readers for subscribing to the Sunday paper. A Sunday-only subscription costs $2.77 a week. Buying it on the newsstands costs $2. Its Sunday circulation is just 16 percent more than its daily circulation. Most newspapers’ Sunday circulation is at least 50 percent bigger than their daily circ.

To be clear, my complaint is not with trimming down print to three days a week. While I understand there are some serious public access issues with that in a poverty-stricken city, the newspaper has to have money to survive.

The problem is that rather than using the new-found cash flow created by reducing operating costs to support its news operations, Advance is gutting its newsroom, getting its community out of the habit of a daily paper, and moving to what looks for all the world like a hamster-wheel model online. It’s liquidating the newspaper, as Jack Shafer recently wrote. Contrast the Newhouses’ actions to those of Warren Buffett, who has been snapping up papers and promising to maintain news staffs and daily publishing—to invest in them. Buffett’s businesses will be healthier longer than the Newhouses’.

What might Advance have done differently? Digital subscription revenue, for one, could have provided a real opportunity to transition print subscribers over to digital ones for the long haul.

The paper also could have killed, say the Tuesday print edition while maintaining the size of its newsroom and the cost of its subscriptions, and given free online access to subscribers to make the changes go down easier.

Or it could have killed four days of print, like it’s doing, but kept its newsroom at full strength and far better able to create the kind of journalism that the digital stuff needs to flourish.

Instead, New Orleans got the worst of all worlds.

The Newhouses say the paper isn’t for sale. Here’s hoping they change their minds before September.

Has America ever needed a media watchdog more than now? Help us by joining CJR today.
Ryan Chittum is a former Wall Street Journal reporter, and deputy editor of The Audit, CJR's business section. If you see notable business journalism, give him a heads-up at [email protected]. Follow him on Twitter at @ryanchittum. Tags: Advance Publications, future of news, New Orleans, newhouse, Times-Picayune