Having accurately predicted that Lachlan Murdoch would return to his dad’s company, Michael Wolff, in his exhilaration, made this crack recently:

…and I thought I was kind of making this stuff up: http://t.co/8O0ZhTQ8PU

Good one. Except he’s gotten so much other stuff wrong lately, particularly on the state of digital media, that you start to wonder.

Digiday quotes Wolff telling a Hearst forum earlier this week that The New York Times has “had incremental success in adding subscription income. It is in no way offsetting the decline in their advertising.”

Trouble is, that’s just wrong. Here’s a chart I made in November showing how the paywall has plugged the ad revenue hole: 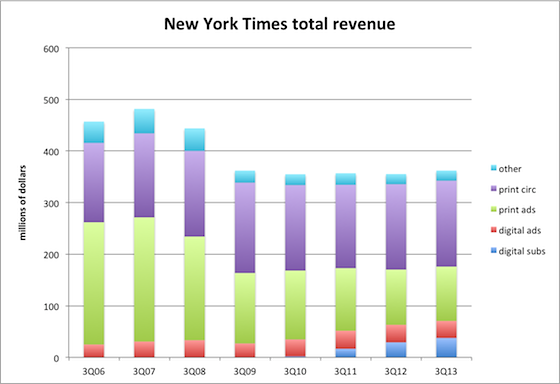 In fact, the paywall has, in every meaningful way, offset the decline in their advertising. And it’s not just a third quarter fluke, either (I used that because it’s the best data the NYT had disclosed then). Here’s what the Times’s annual revenue looks like since 2006: 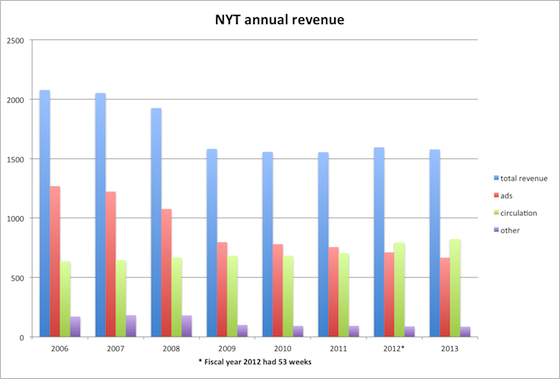 Without the paywall revenue, the NYT would be down at least $128 million since 2010, the year before it launched, rather than up $21 million. So, that’s offset.

“They did usurp The Washington Post, so they took what was essentially a 2 billion dollar business and replaced it with a business that does 25, 30 million dollars in revenue. So that’s kind of the paradigm.

But a moment’s reflection shows that the damage Politico did to the Washington Post is tiny in comparison to that done by the internet as a whole. Politico didn’t take the classifieds, department-store ads, or even the subscribers away from the Post. That’s what’s gravely wounded the paper and it’s due to much bigger forces than Politico.

And while Wolff is tossing off lines like this…

As far as I can tell, Yahoo as we know it has no value. They could just as easily close it down.

…it’s worth pointing out that Yahoo made $1.3 billion last year and has $34 billion worth of value, according to the market.

Okay, so Wolff is spouting off in real time and should be cut some slack (though all this is a reminder of how to take TV bloviating, for instance, with a boulder of salt. Clearly, an authoritative, blasé tone goes a long way.) But it’s not like he doesn’t do this stuff in writing too.

See Wolff’s November column in USA Today on Henry Blodget and Business Insider, in which he said that TheStreet had $60 million in subscription revenue. In fact, it had $37 million subscription revenue in the last full year’s filing (2012) at the time. That rose to $43.5 million in 2013 report, filed a few months after Wolff’s column.

Wolff followed that up with another USA Today column last month that prompted Blodget to ask for three corrections that Wolff and USA Today declined to make.

Specifically, he said Business Insider’s valuation was flat in its latest round of financing and that its owners kept their existing stakes. Blodget says the valuation was “much higher” than the previous round and that one investor upped its stake “significantly.” This is a he said/she said dispute since Blodget’s firm isn’t required to disclose financial information. It’s a bit like a faceoff between Godzilla and Mothra—it’s hard to root for either side—but suffice it to say that Wolff’s account is entirely unattributed, so we have no idea where his information is coming from or if he’s “just kind of making this stuff up.”

Wolff writes that “BI made more than $19 million” last year, when it actually lost money. He’s talking about revenue, but that’s just sloppy.

Back in January, Wolff wrote this for The Guardian:

At a cost per thousand advertising rate on the web or in mobile of $1 or $2 - pretty standard - Ezra Klein will make, optimistically, $8,000 a month, before expenses, if he has a million readers (assuming four page view per unique visitor).

But two months later, he was writing this:

And in the March column on Business Insider, he wrote that, “Part of the problem, in classic publishing terms, is that Business Insider, like the other traffic aggregators, is not an expression of a particular coherent vision or sensibility that people are compelled to seek out. It is, rather, running after the market instead of creating one.”

Which reminds me that we haven’t heard much of anything in a while from Wolff about Newser, Wolff’s own traffic aggregator—a much more parasitic one, at that—with no “particularly coherent vision or sensibility that people are compelled to seek out.”

Mentioned at length. Very profitable. RT @ryanchittum: @MichaelWolffNYC, how’s Newser? why don’t you mention it when slagging other co.s?

Excellent. Maybe Blodget will want to buy it. Or maybe not. For what it’s worth, here’s a Compete chart comparing Business Insider visitors to Newser visitors:

USA Today and The Guardian don’t tell you that its columnist is actually competing in the same space as some of the companies he’s slagging, so I thought I would.

Let’s call that an error of omission.

“It’s a fair question,” says USA Today Editor-in-chief David Callaway in response to a an email I sent over a few days asking why Wolff’s Newser relationship wasn’t disclosed. “Michael isn’t involved with Newser’s day-to-day management, but he is an investor.

“I’ll discuss with him and his editor. We’re happy to disclose all relationships that might appear to cause conflict.”

I haven’t heard back from The Guardian yet.

Has America ever needed a media watchdog more than now? Help us by joining CJR today.
Ryan Chittum is a former Wall Street Journal reporter, and deputy editor of The Audit, CJR's business section. If you see notable business journalism, give him a heads-up at [email protected]. Follow him on Twitter at @ryanchittum. Tags: fact checking, future of news, Henry Blodget, Michael Wolff, trolling