Marc Andreessen has some outlandish predictions about the future of the journalism business:

I am more bullish about the future of the news industry over the next 20 years than almost anyone I know. You are going to see it grow 10X to 100X from where it is today.

Sorry, but those numbers are crazy town, as Poynter’s Rick Edmonds notes.

The US newspaper business alone is about a $35 billion-a-year industry. Add in cable news channels, local newscasts, network news shows, magazines, digital-only sites, and radio and you’re surely up to at least $50 billion.

Is the news going to become a $5 trillion industry? No. That would be one-third of the US economy.

Could the news become a $500 billion industry? No. All advertising spending in the US comes to about $170 billion a year, and only a small portion of ad money goes to news organizations.

Edmonds is on this:

But I cannot get to 10 times, let alone 100, unless 240-hour days are right around the corner. There is only so much time, and only so much time for consuming news, even with double screening. And part of the news industry’s problem is competition for that time from non-news entertainment content and diversions like games and Facebooking.

When people spent 30 to 40 minutes a day on the old newspaper bundle (and tens of millions of people still do), a good chunk of that time—probably most of it— was spent on non-news parts of the paper: the sports page, the living section, the funnies, etc. One of the positive aspects of a successful paywall or membership model is that it tends to rebundle the news with the non-news, particularly on tablets.

But there’s just no way that time-spent can grow 10 times, much less 100 times.

Andreessen also writes this about why journalism is going through such turmoil right now:

The main change is that news businesses from 1946-2005 were mostly monopolies and oligopolies. Now they aren’t. The monopoly/oligopoly structure of newspapers, magazines, and broadcast TV news pre-‘05 meant restricted choice and overly high prices. In other words, the key to the old businesses was control of distribution, way more than anyone ever wanted to admit. That’s wonderful while it lasts, but wrenching when that control goes away.

The end of monopolistic control doesn’t mean that great news businesses can’t get built in highly competitive markets. They just get built differently than before.

This is halfway true. But the control of distribution that was so profitable IRL hasn’t ended online. It just moved, passing from newspapers, TV stations, and the post office to the companies in Andreessen’s portfolio, which happen to have zero cost of content: Google, Facebook, and Twitter (plus the ISPs).

Google’s gross profit margins were 57 percent last year and Facebook’s were 76 percent, which is just bananas. Gannett at the peak of its labor-cutting and advertiser-milking could never have dreamed of those kinds of margins.

Google has 67 percent of the search market. It alone hauls in 41 percent of all online advertising in the entire country.

The existential problem for the news is that the Internet has unbundled advertising from content creation. The new digital monopolies all have hundreds of millions of people creating free content for them. That’s where the big profits are. Oh, sure, there are major differences between the old newspaper monopoly distribution model and the digital one. But the similarities are greater.

The equivalent of Google, Facebook, and Twitter in the pre-Internet days would be a newspaper that shut down its newsroom, kept the ad department (though replacing much of it with robots), and printed stuff other people wrote. Today, Facebook’s got your weddings, baby announcements, and soccer pictures. Twitter’s got your breaking news. And Google’s got your stock listings, sports scores, news, recipes, etc. Oh yeah, and Craigslist has your classifieds (UPDATE: I should mention that Craig Newmark is on CJR’s board of overseers.)

This isn’t to say that this is a bad thing. Not at all. Craigslist, for instance, is a vast improvement over newspaper classifieds, where people used to get gouged for a tiny patch of text. A Google search is far better at finding information you know you want than flipping through a newspaper. Twitter is far timelier for breaking news than any print medium.

But hiving off those services has gravely (and probably irrevocably) damaged the news industry’s prospects.

Journalism, particularly on the local and regional level, doesn’t scale like Facebook scales. Producing quality news necessarily entails relatively high labor costs. Somebody has to make the calls, knock on the doors, write the stories, edit the video, and shoot the photographs. There’s no way to automate that and the user-generated content that Silicon Valley relies on can be a nice supplement for newsrooms, but it’s hardly a replacement for them or even a significant part of them.

Finally, Andreessen would like you to think that unions are a big problem for the future of news:

An obvious one is the bloated cost structure left over from the news industry’s monopoly/oligopoly days. Nobody promised every news outfit a shiny headquarters tower, big expense accounts, and lots of secretaries!

Unions and pensions are another holdover. Both were useful once, but now impose a structural rigidity in a rapidly changing environment. They make it hard to respond to a changing financial environment and to nimbler competition. The better model for incentivizing employees is sharing equity in the company.

First, where is this newsroom with the shiny headquarters tower, the big expense accounts, and lots of secretaries?

That all stopped around the time this started:

Really, does anyone actually believe unions have prevented news organizations from making layoffs and cutting benefits? That’s rich. One must only assume Andreessen’s never been a member of the not-so-mighty Newspaper Guild. What the news industry needs is stock options! That would have fired up the morale in the last decade (see the above chart).

Still, in the face of all we know about why newspaper have declined, Andreessen presents unions as a big obstacle in the way of exponential growth. That’s just not the case. Unionization had nothing to do with the structural changes that have decimated news organizations.

But thanks for the Google Glass-eye view of the news business. 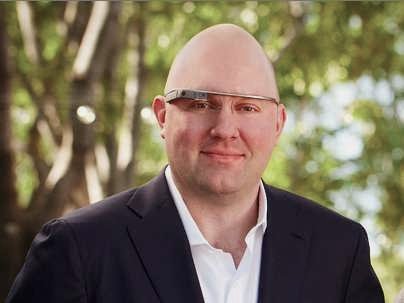 Has America ever needed a media watchdog more than now? Help us by joining CJR today.
Ryan Chittum is a former Wall Street Journal reporter, and deputy editor of The Audit, CJR's business section. If you see notable business journalism, give him a heads-up at [email protected]. Follow him on Twitter at @ryanchittum. Tags: bubble, future of news, Marc Andreessen, paywall, Silicon Valley