No one equates story-length with quality. Let’s start with that concession.

Put another way, there’s a reason David Barstow’s landmark expose of bribery and high-level cover-ups at WalMart ran to more than 7,000 words.

So, all in all, it’s more than instructive to check in on longform newspaper writing, and the start of a new year isn’t a bad time to do it.

And it’s pretty to shocking to see what’s become of the time-honored form since the newspaper industry’s great unraveling started a decade ago.

When it comes to stories longer than 3,000 words, the three papers showed even sharper declines. The WSJ’s total is down 70 percent to 25 stories, from 87 a decade ago, and the LA Times down fully 90 percent to 34 from 368.

The New York Times’s record was more mixed. It published 25 percent fewer stories over 2,000 words from a decade ago, but 32 percent more stories over 3,000 words.

A reporter at one of the papers surveyed suspected as much and compiled the data below, which I double-checked, using simple searches of the Factiva database that measured only word count within a given year. Of course, there are caveats. Many longer pieces are compilation-type articles, such as listings or capsule reviews. But since all papers run them, it seems fair to compare them apples to apples. The data source selected in each case was the main print newspaper alone, as opposed to subsidiary editions (e.g The Wall Street Journal Europe) or online-only material. So the data are not definitive. But the print search in Factiva is the fairest, cleanest comparison between papers.

Responses from the WSJ, LAT, and the Post are below the graphs. The Times’s Eileen Murphy simply notes, correctly, that the paper has been “fairly consistent” in the number of longer stories it publishes over the years.

So without further ado:

The number of stories longer than 2,000 words published in The New York Times, The Wall Street Journal, The Washington Post, and The Los Angeles Times, from 2003 to 2012: 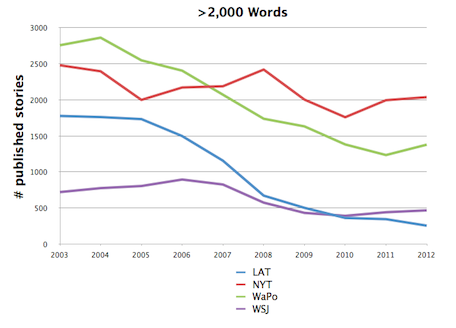 The reduction in longform comes, of course, in the context of a general industry decline. It’s important to note that the number of stories published overall is down at all the papers, with the exception of The Wall Street Journal, which actually published more stories in 2012 (40,070) than it did in 2003 (33,133). So here is a graphic of stories longer than 2,000 as a percentage of total stories at the four papers. 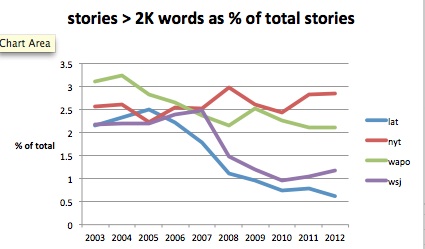 Here are the responses:

I touched based with Times Managing Editor, Marc Duvoisin re your inquiry below.

To provide context, fewer stories of 2,000-plus words does not signify a retreat from narrative journalism. Narrative is not a function of length and never has been. It’s a way of telling a story, an approach built on direct observation, carefully rendered scenes and the patient accretion of detail. We are as committed as ever to the form.

For instance, “Column One,” appears on our front page every day. Most of these stories are in narrative style. And we consistently publish ambitious, longform narratives outside Column One. Two recent and widely admired examples were “Standing Up: Davien’s Story,” Molly Hennessy-Fiske’s two-part series on a young man crippled in a gang shooting and his courageous decision to testify against his assailant, and Tom Curwen’s absorbing account of a young cancer victim’s final months. Other examples include Christopher Goffard’s 2011 two-part series “A Nightmare Made Real,” about a man falsely accused of a sexual assault; Goffard’s “Four Walls And A Bed,” a searing portrait of the homeless on L.A.’s Skid Row; and Joe Mozingo’s “A Family Secret,” an inquiry into his family’s roots and the uncomfortable discoveries he made. The just-released film “The Gangster Squad” is based on a 7-part LA Times serial by Paul Lieberman.

In recent years, our longform storytelling has also typically incorporated unique videos and photo galleries. The two media - print and pixels - are seamlessly integrated in a way that a Factiva search can’t capture. Take a look at the suite of short films embedded in Ken Weiss’ and Rick Loomis’ “Beyond 7 Billion” series on global population growth, the video with Hennessy-Fiske’s series mentioned above and the riveting Liz Baylen videos that accompany Scott Glover’s and Lisa Girion’s series on prescription drug abuse, “Dying For Relief.

We really can’t evaluate these numbers without seeing what’s behind them. We are absolutely committed to in-depth reporting, as is evident from the investigative, narrative, analytical, and profile stories we regularly publish. We evaluate each story individually and endeavor to give stories the length that best serves readers and the subject matter.

And from The Wall Street Journal’s Sara Blask:

Re your inquiry today: The number of words in an article has never been the barometer by which the quality of a publication or its value to readers should be measured. Every article is reported with unique facts and anecdotes that are needed to best tell the story. We consider those factors, while respecting our readers’ busy lives, when determining the length of an article. Our very strong circulation numbers suggest that readers think we’re doing a good job.

The points are all well taken. Good work is still being done. And length is, as I say, should not be equated with quality.

All the spokespeople gamely avoided citing the backdrop to all this, the elephant in the room, the catastrophic migration of advertising revenues across the board away from newspapers. The LA Times’s parent is, of course, just emerging from bankruptcy (after shooting itself in the foot). The Washington Post has suffered its own wounds, some, in our view, also self-inflicted. The New York Times not long ago was reduced to borrowing from the corporate equivalent of a hard-money lender. The Wall Street Journal, does not admit to financial hardship, but, its new parent, too, has been forced to write down a third of its 2008 purchase price. The Journal, it must be said, was not driven so much driven by circumstance as by its own editorial choices made under its new overseer, Rupert Murdoch.

In any case, the decline is real, and the loss in public knowledge can, at least to some degree, be quantified.