Integrated Whale Media Investments of Hong Kong is now the majority owner of Forbes Media, valuing the company at a whopping $475 million.

What the buyers get is a dwindling print magazine, digital growth, and the Forbes brand, which has been seriously diluted in the last four years. It’s hard to imagine an American investor paying half the price.

Fortunately for the Forbes family (and for Bono), the brand apparently still has outsized allure for rich people in Asia. The $475 million valuation, if it’s accurate, is an enormous number for a company that projected late last year that it would take in $21 million in earnings before interest, taxes, depreciation, and amortization in 2013, according to a pitchbook obtained by Ken Doctor. Ebitda doesn’t include the cost of servicing debt, and Forbes’ is large enough that it went into technical default in 2011. It also had trouble paying its rent in 2012.

Its business fortunes have turned since then, but that has come at the expense of Forbes’ journalistic credibility.

It may be hard to recall now, but Forbes was a journalistic force not so long ago. Now it has a boss who says things like “content marketing just might be the full employment act for journalists.”

Four years ago, Forbes acqui-hired Lewis DVorkin and installed him as chief product officer. DVorkin implemented the model he had pioneered at True/Slant, where writers get paid by the traffic they bring, particularly repeat visitors.

This model allows Forbes to have a far larger stable of writers than it could ever employ under more traditional models of work that are subject to things like minimum wage laws. It’s sharecropper journalism. Writers effectively are tenants on Forbes.com, and Forbes gets a big cut of what they bring in. Or it gets everything: The median Forbes writer gets zip.

Forbes has just 40 staff reporters, but it churns out 400 pieces of content a day thanks to its 1,200 contributors. Four hundred of those are “paid freelance contributors,” who must write at least five times a month and interact with commenters. Sixty of them make more than $45,000 a year from Forbes, which means 85 percent of them make less than that. Throw in the unpaid contributors and that moves to 95 percent.

Effectively, Forbes has been paying people with its brand equity. But when you do too much of that, you dilute the brand.

Forbes has blurred the lines more than any other mainstream publisher between journalistic content and marketing/PR. Flacky garbage written by marketing executives and consultants is barely distinguishable at first glance from reported stories written by staff writers. This effect reached its nadir in this exchange reported by Pando Daily’s Erin Griffith:


A curious “interview request” arrived in my inbox today: A Forbes contributor would like to include my opinions in his post about equity crowdfunding. I was flattered for a minute, but then I realized what was really happening here: An executive who has been given a journalist’s platform is now asking — through a publicist — for a journalist to do his work.


I love the irony. Forbes has outsourced the production of content to non-journalists, who are now turning to actual journalists for content. And the topic? Crowdfunding. It’s a snake eating its own tail.

The pay for traffic system incentivizes writers to put out irresponsible clickbait like “Is The CDC Hiding Data About Mercury, Vaccines, And Autism?” (UPDATE: Emily Willingham takes issue with my criticism. See her comments below and my responses). It also results in most-read lists that look like this: 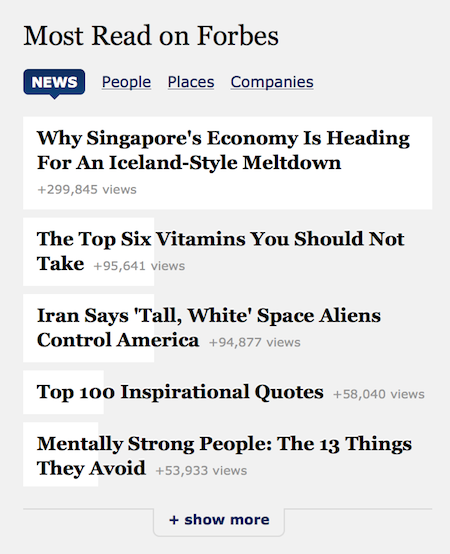 These kinds of things may increase your engagement and clicks, but they’re nothing but bad for a high-end brand like Forbes:

Thus, I hesitate three beats before clicking on a Forbes link. That is the definition of a devalued media brand

But while the strategy has been terrible for its journalism, it’s been decent for the bottom line. Forbes.com traffic has boomed under the strategy, with unique visitors nearly tripling and the company’s overall ad revenue up about $13 million since 2010. Ken Doctor reported earlier this year that Forbes.com’s ad revenue in 2012 was $42 million, and the company projected that to rise to $86 million by 2018. It estimated overall revenue last year at $144.6 million, with ebitda of $20.8 million. That would be a 14.4 percent ebitda margin, or about what The New York Times Company has.

Though it’s surely higher now, that $42 million in digital revenue is surprisingly small for a business site with hundreds of millions of pageviews a month. It implies an average CPM in the high single or low double digits. And that’s despite its aggressively annoying practices that goose ad revenue by auto-rolling video ads and showing interstitial ads every time you visit the site: 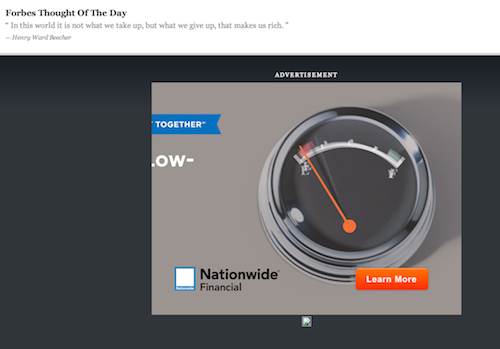 Put another way, back in 2009, David Carr reported in The New York Times that Forbes.com brought in an estimated $70 million to $80 million a year. In 2010, Dennis Kneale wrote that when he was Forbes’ managing editor, the site took in $75 million in 2005. Ad Age reported in 2009 an outlandish estimate that Forbes.com revenues were $288 million, which it at least prefaced with the line that “Internet revenue is even tougher for outside observers to estimate than web traffic.” The Forbes brothers themselves were projecting that the site’s revenue would surpass the magazine’s by 2007 to 2009 (while online ads recently surpassed print ads, overall revenue is still lower online).

In other words, in the ever-optimistic projections of Forbes, its online revenue might reach 2005 levels in 2017 or so.

Perhaps it will. Forbes has taken the path of least resistance in the internet media economy, where most of the risk is shifted away from the corporation: The workers are entrepreneurs, (almost) nobody has a job, and the owners make a mint collecting rents on their platform.

That’s not good for journalism or for the public, but it’s not a bad business model.

Has America ever needed a media watchdog more than now? Help us by joining CJR today.
Ryan Chittum is a former Wall Street Journal reporter, and deputy editor of The Audit, CJR's business section. If you see notable business journalism, give him a heads-up at [email protected]. Follow him on Twitter at @ryanchittum. Tags: Forbes, future of news, Jeff Jarvis, Lewis DVorkin, Steve Forbes