This summer, New York Times columnist Paul Krugman went on CNBC to talk about his book and ended up getting ambushed by a pack of smug, out of touch, and/or misinformed journalists, something I wrote was emblematic of the network’s financial capture.

Now CNBC’s Becky Quick, one of the more level heads over there, takes to the pages of Fortune to attack the Nobel-winning Princeton economist’s “downright dangerous” idea that we’re not in a fiscal crisis and don’t need Simpson-Bowles’ advice, writing that “It is hard to find anyone who actually agrees with him.”

It’s hard to find anyone on CNBC or in Fortune, perhaps, but it’s not if you look outside those two dispensers of business world conventional wisdom.

But fine, ignore all these esteemed economists if you want. What does Mr. Market have to say: 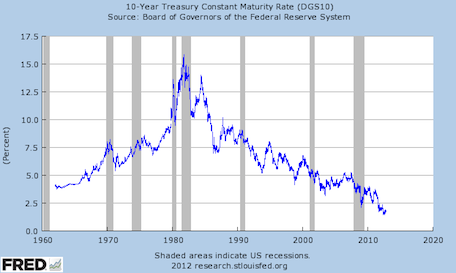 That’s the 10 year Treasury bond, the critical gauge on how much investors are charging the government to borrow money. The government today has to pay 1.72 percent a year to borrow money for a decade, which is near an all-time low. We’ve been told repeatedly, for years now, by the likes of Quick that the “bond vigilantes” will be showing up any minute to impose discipline on the free-spending gubmint by driving up interest rates. Instead, they are effectively begging the U.S. to borrow their money.

It’s really not very hard to understand what Krugman has been saying all along through the crisis. Let me try to sum it up: The housing bust and financial crisis created a “Lesser Depression” with the private sector is paying down decades of overborrowing. That has seriously weakened demand, and government should spend in the near to medium term to prop it up. Once the recovery is robust enough, then the government should remove stimulus, a la Keynes’s “the boom, not the slump, is the time for austerity”. Growth will ameliorate much of the deficit problem by increasing revenue, and the rich paying more in taxes will help too. Social Security’s long term problems are minor and easily fixed and claims to the contrary are ideologically driven. The overarching long run deficit problem is almost entirely about health care spending, which can be best fixed by adopting European style health care systems. Simpson-Bowles is far too tilted to spending cuts on the poor and middle class as opposed to tax increases on the wealthy. The “bond vigilantes” are not coming to trigger a fiscal crisis. Their willingness to accept low returns signals a still depressed economy.

Quick might be surprised to learn that U.S. debt levels are actually falling at the fastest pace in sixty years, as MarketWatch’s Rex Nutting pointed out this summer: 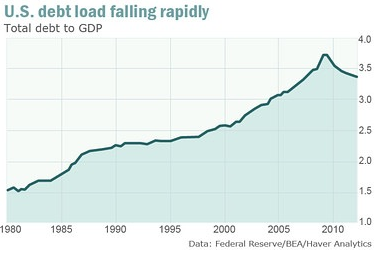 If it wasn’t for the Federal deficit, the debt-to-GDP chart would be declining even more precipitously, and the economy would be a disaster. Deleveraging is a painful process, and the Federal government is — rightly — easing that pain right now.

Anyway, it’s just not true that it’s hard to find people who agree with Krugman’s view of the crisis. Go down the IDEAS list of top economists and add them up.

Has America ever needed a media watchdog more than now? Help us by joining CJR today.
Ryan Chittum is a former Wall Street Journal reporter, and deputy editor of The Audit, CJR's business section. If you see notable business journalism, give him a heads-up at [email protected]. Follow him on Twitter at @ryanchittum. Tags: Becky Quick, CNBC, deficits, Fortune, Paul Krugman