I wrote on Monday that GoldieBlox’s parody of the Beastie Boys song “Girls” was a a “clear case” of copyright infringement.

As Felix Salmon pointed out (ADDING: and Shane Ferro, I should say), that overstated the legal argument quite a bit—it’s rarely clear on much involving copyright and fair use claims.

I do still think GoldieBlox’s actions were egregious enough and in such bad faith that it would lose if this case ever went to trial. It won’t: The toy company has re-made the offending ad without the Beastie Boys music and the band is not stupid enough to risk another round of the kind of awful PR it already, unfairly, received. But that would depend on a judge’s interpretation of the inherently murky fair-use law.

Rachel Sklar argues that GoldieBlox’s ad was indeed fair use and breaks down her case under the four factors judges must use to resolve fair use disputes. “Is GoldieBlox’s song a transformative piece of social commentary or a cheap toy ploy? I come down for GoldieBlox here, as the Court did for 2 Live Crew in ‘94,” she writes, saying the decision “held that their commercial parody was fair use despite being commercial.”

Sklar’s a lawyer and I’m not, so watch as I step out on this limb.

But the court explicitly said that it did not decide that 2 Live Crew’s parody was fair use—it said it “may be a fair use.” Souter’s opinion found that the Court of Appeals had ruled improperly because it considered the commercial nature of the recording to the exclusion of all other factors, writing that “It was error for the Court of Appeals to conclude that the commercial nature of 2 Live Crew’s parody of ‘Oh, Pretty Woman’ rendered it presumptively unfair… While we might not assign a high rank to the parodic element here, we think it fair to say that 2 Live Crew’s song reasonably could be perceived as commenting on the original or criticizing it, to some degree.”

It then sent the case back down to the Court of Appeals to decide—based on all the factors—whether it was fair use. The appeals court never got to revisit the case, though, because 2 Live Crew settled with Orbison out of court, agreeing to pay to license the song—something Orbison’s estate had initially refused to allow.

The Souter opinion did find that 2 Live Crew’s rewriting of Orbison’s lyrics was fair use. There’s no question that GoldieBlox’s rewritten lyrics were fair use, as well. The key point is whether its use of the music, which it made to sound as close to the original as possible for nearly two minutes, was fair use. That’s pushing things, to say the least.

The Court said in Campbell that “we express no opinion whether repetition of the bass riff is excessive copying, and we remand to permit evaluation of the amount taken, in light of the song’s parodic purpose and character, its transformative elements, and considerations of the potential for market substitution sketched more fully below.”

As Felix pointed out, Souter explicitly wrote “The use, for example, of a copyrighted work to advertise a product, even in a parody, will be entitled to less indulgence under the first factor of the fair use enquiry than the sale of a parody for its own sake, let alone one performed a single time by students in school.”

But there has since been a case that does give GoldieBlox a better defense—one that I didn’t consider. Read Andy Baio for a good synopsis of Paramount Pictures’s victory over Annie Liebovitz, who sued over a Naked Gun 33 1/3 ad that parodied her Vanity Fair portrait of a pregnant Demi Moore. He quotes the Second Circuit Court of Appeals saying, “On balance, the strong parodic nature of the ad tips the first factor significantly toward fair use, even after making some discount for the fact that it promotes a commercial product.” Unfortunately, Leibovitz didn’t appeal that ruling to the Supreme Court.

It’s unclear whether courts would find that GoldieBlox’s extensive use was protected by fair use, but it’s clear that an infringement finding is not the slam dunk I thought it was, even if it’s morally and ethically wrong. If, as Felix asserts, the Beasties’ version of “Girls” itself was a parody of hip hop misogyny, that would seriously undercut GoldieBlox. In 1998, Yauch told the NME that the band had re-thought its earlier songs, saying, “some of the things we did in the past that we thought were a joke ended up having lasting negative effects.”

Regardless, it’s clear GoldieBlox wasn’t dealing in good faith here. Had GoldieBlox parodied the lyrics without copying the music note for note for two minutes, there would be no issue. Had it simply used the riff as a tease, it would probably be in the clear, as well.

But it used the whole thing, and it never asked the Beastie Boys if that was okay, much less offered to pay them for it. That’s not because it knew that the Beasties wouldn’t license it—its founder writes that “we were completely unaware that the late, great Adam Yauch had requested in his will that the Beastie Boys songs never be used in advertising.” Why did it act so offensively? Felix put it best:

Under what Paul Carr has diagnosed as the rules of the Cult of Disruption, GoldieBlox neither sought nor received permission to create these videos: it never licensed the music it used from the artists who wrote it. That wouldn’t be the Silicon Valley way.

It’s also worth noting that GoldieBlox used a large amount of Queen’s “We Are the Champions” in an advertisement this summer. In that case, there’s no chance it could claim fair use (if it didn’t license it), because it barely changed the words. Using these two classic songs spread GoldieBlox’s commercials much farther, much faster than they would have with any song the company could have come up with. Other people’s songs have sold it a whole lot of toys.

You’ll note that the official GoldieBlox ad has now disappeared from YouTube (or at least been made private. You can still see a copy here). I’ve got questions out to both Queen and GoldieBlox about whether the company licensed the song. I’ll bet you the cost of a Queen license that it didn’t. 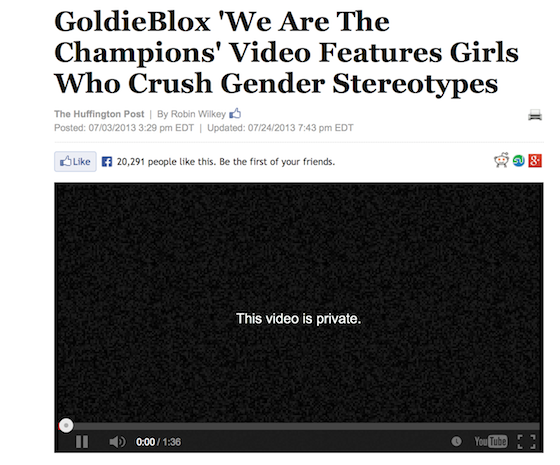 I’ll update when and if I hear back.

UPDATE 12/2: A GoldieBlox spokeswoman tells me, “We have no comment on that video.”

Has America ever needed a media watchdog more than now? Help us by joining CJR today.
Ryan Chittum is a former Wall Street Journal reporter, and deputy editor of The Audit, CJR's business section. If you see notable business journalism, give him a heads-up at [email protected]. Follow him on Twitter at @ryanchittum. Tags: Beastie Boys, copyright, fair use, GoldieBlox, We Are the Champions