Just recently, the Boston Red Sox’s parent company bought the Boston Globe, and the head of the dominant online retailer with many regulatory interests bought the capital’s leading paper, The Washington Post. Meanwhile, in a footnote, the Orange County Register’s parent was said to have struck a deal to serve as a broker of sorts for the city of Anaheim.

All situations involve conflicts of interest that make life harder for the newsrooms involved. How will the Globe cover the ‘Sawx? Very carefully. How does The Washington Post cover Amazon’s regulatory and tax maneuvering in Washington? Same answer. And so on.

But when it comes to conflicts, no news organization has them to quite the degree that ESPN has. Its newsrooms conflicts with the National Football League and major college football, to name just two of the institutions it tasks itself with covering, are so immense and so central as to be in a different category.

This is the Beef ‘O’ Brady’s Bowl of conflicts—if it were mixed with the Chick-fil-a Bowl and the Buffalo Wild Wings Bowl, stuffed inside a deep-dish Little Caesars Bowl, wrapped in a Russell Athletic Bowl, and slingshot to the Sun Bowl.

The Register’s deal with the city is illustrative. Here, the stakes are tiny, but still the relationship causes problems. In that case, the paper’s parent has struck a deal with the city to sell sponsorships for a new transportation hub, giving the media company a clear disincentive to report on the hub in a negative light. Meanwhile, the paper has to cover the hub, which is still under construction and has run into snarls. The end of the world? No, but under the deal the media company would become business partners with the main thing it is supposed to cover, the city. At a minimum, it doesn’t meet past standards for independence.

Here is the relationship its newsroom’s surrounding organization has with the institutions it supposed to cover: 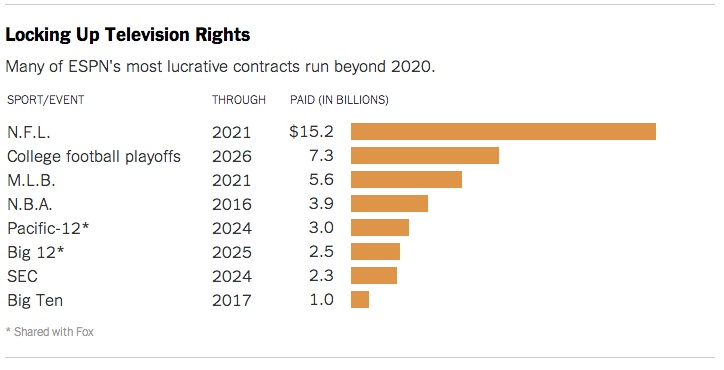 That’s the amount of money it is paying to the leagues, an amount significantly smaller than the sum televising the leagues will bring in. ESPN generates a material portion of the revenue and profit of its parent, Walt Disney Co. Or as Michael Eisner puts it: “To this day, the Walt Disney Company would not exist without ESPN. The protection of Mickey Mouse is ESPN.”

To put this in perspective, ESPN and its sister stations, which comprise the bulk of the “cable networks” portion of its parent company’s financial statements, generated the lion’s share of $13.6 billion in revenues in the fiscal year ended last September and $5.7 billion in operating income. Disney as a whole generated $42 billion in revenue and about $10 billion in operating income. So, over a company with vast media holdings, one portion generates more than half the profit. And check out those margins, will you, Johnny?

Nothing wrong with making a buck. But here’s the rub: many of the institutions that ESPN is supposed to cover would also not be where they are today if not for ESPN. More than most institutions—city hall, for instance, or online retail—sports only “exist” as a business proposition to a great degree because of the media coverage they are able to generate. When Shippensburg plays Saginaw Valley, it may be a great game, but it’s not big business.

If ESPN chooses to televise something, that thing gains while untelevised rivals suffer in the competition for dollars and students. That puts ESPN the network in a unique position of powerbroker, to the point that it can help set game times, schedules, and even influence which college conferences live and which die. And it’s not just the money. The exposure itself is invaluable for athletic recruiting and for the university as a whole. So when ESPN calls an audible, colleges get their backfields in motion.

Every Monday morning during the season, ESPN’s football brain trust meets in a war room in Building 12 on the network’s sprawling campus in Bristol, Conn., to consider options for coming games and make sure the hottest teams get the choicest time slots on each of its channels. After decisions are made, calls go out across the country, setting off a scramble on dozens of campuses as universities arrange everything from parking to security to team transportation.

Such is ESPN’s power, it can move Louisville to the Atlantic Coast:

The power of television contracts has driven the recent fever of conference switching, as colleges forsake geographic loyalties in pursuit of more lucrative deals. In the last year, three universities jumped to the Atlantic Coast Conference for all sports: Pittsburgh, Syracuse and Louisville, none of them located within 200 miles of the Atlantic coast. Each stands to receive more than $16 million a year from the A.C.C.’s $3.6 billion contract with ESPN.

Or, as Louisville’s athletic director is quoted this morning as saying:

“We owe them so, so much,” Mr. Jurich said of ESPN. “They were willing to take a chance on us.”

The system as configured creates other distortions, the most prominent being the separation of Division 1 college football, like the rest of the country, into the one percent and the occupy crowd.

But of 340 Division I colleges, the athletic departments at only 23 generate enough revenue to cover their expenses, according to a report that Daniel Fulks of Transylvania University prepared for the N.C.A.A. in May.

ESPN’s newsroom professionals gamely assert their independence, but that’s not the point. The point is the journalism system in which they operate.

In a traditional news paradigm, a media company would generate revenue from an array of advertisers (and some from readers) and would then cover the government and other powerful institutions. This wasn’t conflict-free but at least the organizations had eggs in many baskets.

Here, the media company’s main source of income is the very thing its newsroom is supposed to cover. What’s more, it’s a business partner.

The newsroom was unable, for instance, to adequately cover its own role in the Big 12 conference realignment mess, as Ryan Chittum wrote at the time.

This is all backdrop to the decision last week by ESPN to pull out of the Frontline investigation into head injuries in the NFL, its business partner. ESPN officials pleaded they did so only because of misunderstandings about editorial control, but they did so after a combative lunch meeting with the NFL’s top brass, including Roger Goodell.

Whatever the case, ESPN has a real conflict—not just an apparent one—and this is how it managed it.

Bottom line for readers: The Post and Globe have been swallowed by businesses with interests outside the press, with the LA Times and Chicago Tribune narrowly escaping a similar fate, for now. Does anyone now question how essential it is for The New York Times, which of course broke all the ESPN stories cited here, yet another exposé, as part of an ongoing series, to remain independent?

Has America ever needed a media watchdog more than now? Help us by joining CJR today.
Dean Starkman Dean Starkman runs The Audit, CJR's business section, and is the author of The Watchdog That Didn't Bark: The Financial Crisis and the Disappearance of Investigative Journalism (Columbia University Press, January 2014). Follow Dean on Twitter: @deanstarkman.