This Andrew Ross Sorkin vignette on “Two Myths and One Reality” five years after the fall of Lehman Brothers is must-see TV.

Sorkin looks pained, for once, to be apologizing for Wall Street all the time. If you turn off the sound, it looks like an R&B video produced by Brooks Brothers: 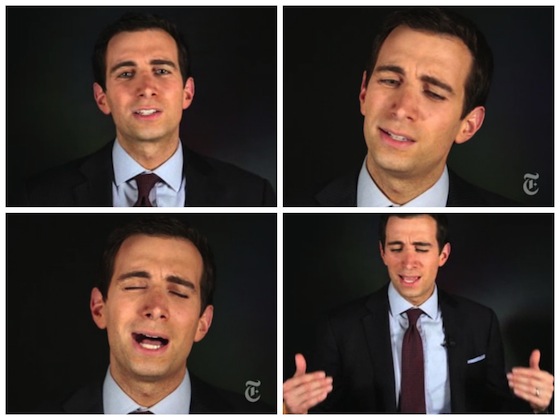 But let’s leave aside the Times’s overly dramatic treatment and Sorkin’s hamming it up and look at his “two myths and one reality” about the financial crisis, which reveal a lot about how this highly influential journalist thinks. Barry Ritholtz had an apt one-word critique of Sorkin’s piece: “BULLSHIT.” It’s useful to know why. Here’s the video:

Sorkin’s first myth is that “the bankers walked away with boatloads of money in bonuses and the rest of the country didn’t. And why would we spend $700 billion bailing out these banks without putting some kind of new rules or restrictions or strings to prevent this from happening?”

First of all, that’s not a myth. The bankers really did walk away with boatloads of money and people really did question why we didn’t put any restrictions—none at all—when handing out those bailouts.

Sorkin just wants to tell us the truth we don’t want to know, which is part of his concern-troll shtick: “I’m on your side, seekers of justice, I really am. But, sadly, let me tell you why, sadly, you’re wrong”:

And there’s an explanation, but it’s unsatisfying and it’s this: That ultimately we needed to save all the banks—we needed to recapitalize the entire system and we needed everybody to participate on a voluntary basis. As crazy as it sounds today, there are banks that probably would have actually said “no” that they didn’t want the money if there were strings attached.

And? Letting them fail—or nationalizing them—would have been fine with most of us.

But anyway, it’s just false that the banks even had a choice. Here are Treasury Secretary Henry Paulson’s talking points from the critical October 13, 2008 meeting (emphasis mine):

We don’t believe it is tenable to opt out because doing so would leave you vulnerable and exposed.

If a capital infusion is not appealing, you should be aware that your regulator will require it in any circumstance.

In other words, the Bush administration explicitly told the banks they would be taking TARP capital from the government voluntarily or by force, so if there’s a myth here it’s Sorkin’s claim that banks could have refused the bailouts.

If there’s one question I get just about more than any other, it’s “Why didn’t anybody go to jail, and did nobody try?” And there’s an answer to that too.

That’s also not a myth, but whatever.

Perhaps Sorkin is referring to his own newspaper. You know, the non-DealBook side, whose Gretchen Morgenson and Louise Story led off an epic piece two years ago with these paragraphs:

It is a question asked repeatedly across America: why, in the aftermath of a financial mess that generated hundreds of billions in losses, have no high-profile participants in the disaster been prosecuted?

Answering such a question — the equivalent of determining why a dog did not bark — is anything but simple.

Ahem. That’s a lesson worth remembering as newspapers follow the CPMs to the shallows of video journalism.

Sorkin lists all the people with incentives to get scalps on Wall Street: prosecutors, regulators, journalists, etc. “We’ve tried—all of us have tried—to find that criminal element,” he says.

You mean like with the SEC’s supposedly exhaustive investigation of wrongdoing at Lehman Brothers? The one where the subpoena-powered regulators talked to three dozen people, two-thirds fewer than Sports Illustrated did for its series on Oklahoma State football culture—and which DealBook wrote up an access special?

Return to that Morgenson/Story piece for this on Tim Geithner advising Andrew Cuomo to back off on his Wall Street probes:

Friendly since their days in the Clinton administration, the two met in Mr. Cuomo’s office in Lower Manhattan, steps from Wall Street and the New York Fed. According to three people briefed at the time about the meeting, Mr. Geithner expressed concern about the fragility of the financial system.

His worry, according to these people, sprang from a desire to calm markets, a goal that could be complicated by a hard-charging attorney general.

Read the whole thing. It’s one of the best pieces of the crisis. And it makes Sorkin’s excuse-making look that much worse.

The banks, the financial institutions themselves, they’re probably not going to accept a bailout the next time. And I worry that when the next domino falls…it will fall, and when it does, I’m not sure we know who’s going to be there to catch it.

Does anyone actually believe that banks won’t be demanding bailouts—and getting them—the next time they get into trouble?

Has America ever needed a media watchdog more than now? Help us by joining CJR today.
Ryan Chittum is a former Wall Street Journal reporter, and deputy editor of The Audit, CJR's business section. If you see notable business journalism, give him a heads-up at [email protected]. Follow him on Twitter at @ryanchittum. Tags: Andrew Ross Sorkin, DealBook, financial crisis, The New York Times, video