Helaine Olen has an eye-opening column in The Guardian on the concept of financial literacy and how it’s misused to serve finance-industry interests.

What could possibly be wrong with pushing financial literacy? Nothing per se. But it’s an all too convenient excuse for banks to shed responsibility for their own reckless behavior and for elites to justify structural changes have shifted risk onto individuals. Or as Olen writes:

It promotes the false equivalence that the victims of the financial shenanigans of the past several years are as responsible for the financial crisis as the financial services sector, the ultimate creator of all those financial products of mass destruction.

Indeed, look at the blame-the-borrowers meme we’ve written so much about in the last five years. That thesis says that the problem is not the ever-denser complexity of modern finance and the predations of its practitioners, it’s that borrowers were financially illiterate (read: stupid) or outright criminal.

Never mind the massive amounts of evidence of predatory lending and outright fraud by lenders.

Recall when Janet Tavakoli briefly mentioned predatory lending on CNBC and its talking heads went nuts, denying that such a thing even exists.

Rick Santelli, in that sordid instance (and many others), exemplifies what Olen is talking about:

We cannot look at our citizens as stupid. And if they are stupid and they sign things that they don’t understand, that’s an issue that should be dealt with. But to carte blanche make these rules and to bureaucratize the entire system because of the shortcomings of those that are financially illiterate. Deal with the issue: Financial illiteracy.

Problem is, as Olen points out, teaching financial literacy just doesn’t work—at least using current curricula. “Unfortunately, we do not find conclusive evidence that, in general, financial education programs do lead to greater financial knowledge and ultimately to better financial behavior,” wrote researchers at the Cleveland Federal Reserve in a 2008 study. Olen quotes another study, on high-school financial-literacy classes, that found “no impact on credit management outcomes, including: credit scores, credit card delinquencies, or the probability of declaring bankruptcy or experiencing foreclosure.”

Surely financial education needs changing. But it will never take the place of good regulation.

As Joseph Stiglitz and others have shown, information asymmetry is a critical problem in markets like the mortgage business. Your broker has done hundreds or thousands of deals. You will do at most a handful—in your lifetime. We’ll never educate everyone to be as savvy as their lenders about the 100 or so pages they’re signing to buy a house, much less to get a credit card.

If only American was more financially literate, our problems would be solved. Never mind that declining real median incomes are at the root of most of the economy’s woes and that risk has been shifted over the past thirty-plus years onto individuals as 401(k)s replaced pensions, shareholder capitalism all but removed workers as stakeholders, student loans replaced state-funding for colleges, etc.

Olen gets an amazing quote from the head of Penn State’s new financial literacy office, whom she asked about whether financial education could counteract skyrocketing tuition and fees (emphasis mine):

Look, back in the day, you could be financially illiterate and still not end up in indentured servitude for going to Penn State—something society all but tells us we have to do. Financial illiteracy is not the primary problem here. As Olen points out, “state funding provided 62% of the school’s budget in 1970, vs 14% in 2012.” The precipitous decline of state funding for colleges is a fact that’s often lost in media coverage of the soaring cost of college.

In Seattle, where I’m based, the cost of educating a student at the University of Washington has remained constant in real terms for the last two decades. But tuition has quadrupled because the state has gutted higher education funding: 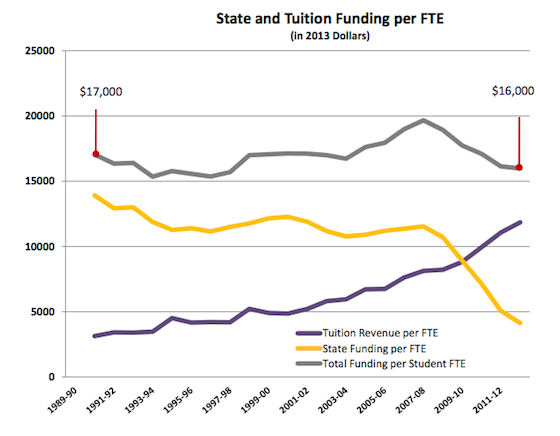 We used to collectively fund colleges via taxes because we thought higher education was a public good worth subsidizing heavily. Now we put almost the entire burden on individual students and—if they’re lucky—their parents.

When even our so-called financial literacy experts can’t figure that out, it’s worth questioning their entire enterprise.

Has America ever needed a media watchdog more than now? Help us by joining CJR today.
Ryan Chittum is a former Wall Street Journal reporter, and deputy editor of The Audit, CJR's business section. If you see notable business journalism, give him a heads-up at [email protected]. Follow him on Twitter at @ryanchittum. Tags: banks, cost of college, financial literacy, Helaine Olen, personal finance