The Huffington Post reports that McDonald’s could double its workers wages by raising the price of a Big Mac by 68 cents. It went large on the Internet on Tuesday.

Unfortunately, what it originally claimed was a study by a University of Kansas researcher turns out to be something—a term paper, maybe?—given to Huffington Post by a KU undergrad. And there are serious problems with it. The correction on its provenance came too late, though: it’s all over the internets:

McDonald’s can afford to pay its workers a living wage without sacrificing any of its low menu prices, according to a new study provided to The Huffington Post by a University of Kansas student.

Doubling the salaries and benefits of all McDonald’s employees — from workers earning the federal minimum wage of $7.25 per hour to CEO Donald Thompson, whose 2012 compensation totaled $8.75 million — would cause the price of a Big Mac to increase just 68 cents, from $3.99 to $4.67, Arnobio Morelix told HuffPost. In addition, every item on the Dollar Menu would go up by 17 cents.

Since the HuffPost doesn’t bother to publish the actual “study,” which wasn’t really a study, we can’t really tell where these numbers are coming from. So let’s back into them.

First of all, 68 cents may not sound like much, but it really means that McDonald’s would have to raise its menu prices across the board by 17 percent. That ain’t peanuts.

Second, the 17 percent number is just incorrect. It’s too low. Here’s the latest McDonald’s 10-K, which gives us a glimpse at the company’s labor costs: 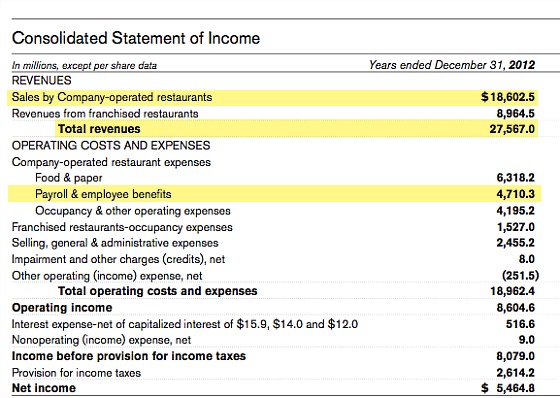 The only way to get the 17 percent-of-revenue labor figure is to divide payroll and benefits at company-operated restaurants by total revenues. But here’s the thing: More than 80 percent of McDonald’s restaurants are franchises, and the company makes scads of money from them in no small part because it has no direct labor expense at those stores. The HuffPost explicitly includes executive compensation in its 17 percent figure, but executive comp and the pay of folks in Chicago who run marketing and the like are housed in “selling, general & administrative expenses,” not under payroll & employee benefits at company-operated stores.

You have to divide company-operated payroll & employee benefits by company-operated sales to get an apples-to-apples measure. That gets you 25 percent. So a Big Mac would, in fact, have to go up by a full dollar, not 68 cents, in order to double wages at McDonald’s. And the Dollar Menu would have to become the Dollar Twenty-Five menu.

It’s harder to get at non-restaurant (ie headquarters) wages because McDonald’s doesn’t break out labor costs in SG&A. Assuming pay is half of the total, it would put the number at 22 percent.

And then there are the franchisees. There are 1.9 million people who work at McDonald’s restaurants, but just 440,000 of those actually work for McDonald’s Corporation. The rest work for franchisees who pay a cut of their sales to Chicago for the rights to the Golden Arches, Ronald McDonald, and standardized coronaries-on-a-plate.

Worldwide, those franchisees took in $70 billion in revenue last year, and US stores took in $31 billion of that. McDonald’s Corporation doesn’t break out similar expense numbers for its franchisees, so the best I can do is research from Janney Capital Markets. It puts labor costs for US franchises at 24 percent of sales, which gibes with McDonald’s company-owned stores. Janney estimates franchisee operating income at just 5 percent.

If Janney is right (and I’m a bit skeptical. Five percent margins seem awfully low), McDonald’s franchisees in the US pay out, very roughly, $7.4 billion in labor costs a year and make about $1.6 billion in operating profit. Doubling pay without dipping into profit would mean menu prices would have to rise 24 percent—and that’s assuming such price increases wouldn’t hurt sales, which they would.

The bottom line is: This “study” and The Huffington Post are both wrong.

Unfortunately, bad information spreads pretty fast these days. The false findings got picked up far and wide. I retweeted a Henry Blodget post at Business Insider before looking into its origins.

The bogus information even made into credulous Forbes and New York Times blog posts.

But most ridiculous was Advance Publications’ MLive.com, which writes, falsely, that “Doubling the salary and benefits of every McDonald’s employee would increase the cost of a Big Mac by just 68 cents according to comprehensive research conducted by the University of Kansas.”

And then there’s this (emphasis mine):

At year’s end, McDonald’s paid its employees - including the CEO Donald Thompson, whose salary was $8.75 million - more than $47.1 billion in wages and benefits, while earning a net income of $54.6 billion.

Morelix said that Thompson’s salary could double to $17.5 million, and every worker could earn a salary of $15 per hour, and the company’s net income would remain at $54.6 billion with his suggested price increases.

McDonald’s is the most profitable company in the history of the world? No. It earned $5.46 billion last year, not $54.6 billion. And MLive didn’t even bother to credit the original source of the misinformation, The Huffington Post.

All this is a separate question from whether low-wage workers ought to be paid much more. I think they should (though not all at once).

But get your numbers right.

(Updated to add the NYT/Forbes paragraph)

AND: Here’s a follow-up, an appalling tour of click-whoring aggregation at its worst and of fixes not made.

A McDonald’s own-goal on wages. Accidentally exposing the fallacy of its own personal-finance advice to workers.

Minimum sense on the minimum wage
. A WSJ op-ed from a front group for low-wage employers gets it very wrong.

Sympathy for the Walmart flack. How the PR-afflicted colossus pushes its “jobs” narrative on a credulous press

WSJ Gives Minimum Info on Front Group. An astroturf group gets a hit on the minimum wage.

The Minimum Wage in Context. How low-end pay has tumbled over the last 45 years.

Has America ever needed a media watchdog more than now? Help us by joining CJR today.
Ryan Chittum is a former Wall Street Journal reporter, and deputy editor of The Audit, CJR's business section. If you see notable business journalism, give him a heads-up at [email protected]. Follow him on Twitter at @ryanchittum. Tags: Huffington Post, McDonald's, minimum wage, numeracy, studies