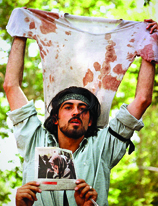 In 1999, an Iranian college student and an Iranian news photographer crossed paths briefly but momentously in Tehran during a student protest of regime practices. The photographer, Jamshid Bayrami, on assignment for Reuters, snapped a shot of the student, Ahmad Batebi, holding up the bloodied shirt of a fellow protestor who had been shot. The photograph appeared on the July 17 cover of The Economist and was splashed across newspapers worldwide, providing an instant symbol of pro-democracy student protests that remain the most significant in Iran’s modern history. Batebi was imprisoned for his participation in the protest; after the photo appeared, he was sentenced to death and tortured. But the photo also helped produce a humanitarian outcry that got his death sentence rescinded. Batebi fled Iran while out of prison on medical leave, and his arrival in the U.S. in spring 2008 was well covered. But little has been said about Bayrami, now forty-seven and a well-known photographer. Jane Gottlieb and translator Nahid Siamdoust interviewed Bayrami in Farsi, via e-mail, about his most famous photo.

What do you recall about the moment when you photographed Batebi?
The students had gathered to protest the beating and killing of Tehran University students by police and regime thugs. Every day, the crowd of students was growing larger. Batebi was among the students—tall, with long hair and a headband. His face really stood out; and in one rare instant in which there was silence in his expression and he was holding that bloody T-shirt, with the green background of foliage in that crowded and loud atmosphere, I took that photograph.

Did others hold you responsible for what happened to Batebi? How did you react?

Emotionally, I suffered a great deal due to this photograph, because whenever anyone found out I was the photographer, they would say I was responsible for this young man being imprisoned, and they would curse me. For a while, I disliked myself and stopped photography altogether. And from that day on, I put aside news photography forever, and took on social-documentary photography.

You later learned how Batebi felt about the photograph. What did he say?

For years, I was in emotional torment and suffering, until one day I heard that Batebi had said he’s not upset with me and that I had only carried out my professional duty. That’s when I was finally relieved.

You’ve documented events in Iran for several decades. How has a sense of place informed your work?

I’ve learned photography through practicing, and have photographed many developments inside Iran—from the Iran-Iraq war to the present. I have never applied to the U.S. or Europe for immigration, and as a photographer, I document Iran’s religious societies, and Afghani refugees who have become asylum-seekers in Iran due to the war in their country. I am not a photographer who is in pursuit of fame and sensationalism. I live in my own world.

Has America ever needed a media watchdog more than now? Help us by joining CJR today.
Jane Gottlieb is a freelance writer in Albany, N.Y. who writes frequently about photography.