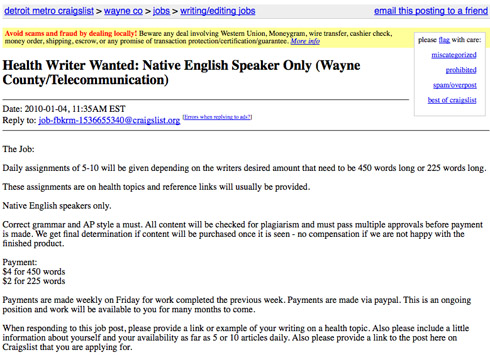 Data gathered by the Newspaper Association of America show a savage decline in newspaper ad revenue in the third quarter of 2008, down 18 percent from the same period the previous year. Classified volume was down 30 percent for the same quarter. Craig Newmark, the founder of Craigslist, has been tried and convicted in the media for causing that decline. (Over drinks at the big annual journalism educators’ conference in San Antonio in 2005, Newmark jokingly apologized to me for the destruction of American newspapers.) The question is by now familiar: How can newspapers compete with a venue that accepts free ads? In fact, newspapers have been competing. Craigslist started in 1995 and went national in 2000, the year the dot-com bubble burst, ending a flush period for employment ads. Yet after that period, newspaper classifieds at least held their own through 2006. Total classified advertising volume in daily papers increased from $12.5 billion in pre-Craigslist 1994 to $14.2 billion in 2007. Total ad volume (including display and Web advertising) was $45.4 billion in 2007, versus $34.1 billion in 1994.

Even after adjusting for inflation, classified revenue was up slightly through 2006, compared to 1994. And in the down year of 2007, inflation-adjusted display advertising volume was $600 million above 1994.

But the most commonly used measure of inflation, the rise in all prices for urban wage earners, tells only part of the story. Eight percent fewer dailies share that extra revenue now, and advertisers reached 18 percent fewer print subscribers in 2007 than they reached in 1994.

Thus, the typical newspaper saw significant, real gains in revenue at least through early 2008, by which time the economy was firmly in recession. What’s more, advertisers were willing to spend more per subscriber: $855 in 2007, compared to $548 in 1994—up 62 percent (adjusted for inflation, the increase is 16 percent).

So why would advertisers spend more to reach a decreasing number of subscribers? One reason is that newspapers gained pricing power, aggressively raising rates as direct competition from other newspapers decreased in major cities.

The second, and bigger, reason: advertisers look beyond the newspaper print subscriber base to readers on the Web. Newspaper publishers on average calculate their online ad revenue at less than 10 percent of their total ad revenue, but that’s an underestimate. Clearly, advertisers have noticed that online readership has more than made up for losses in print subscribers and revenue.

Unfortunately, as ad revenue climbed to its peak in 2000, just before the dot-com meltdown, chains overpaid to buy competitors. (The New York Times Company bought The Boston Globe in 1993 for $1.1 billion. As of early January, the value of all Times stock was less than that.) And now, owners compound their errors by mistaking severe economic stress for reader and advertiser disinterest, and by trumpeting that assessment to Wall Street.

Craigslist is a straw man. It is the ups and downs of the economy that truly affect classified advertising and, so far, they’ve been resilient.

There’s no substitute for what quality newspapers do, on paper or online, and cheapening the product only narrows the advantage. Advertisers are already on board, and neither they nor readers are served by cutting quality.

Has America ever needed a media watchdog more than now? Help us by joining CJR today.
Steven S. Ross is editor-in-chief of Broadband Properties Magazine and author of 19 books. He taught full-time for 20 years at Columbia and now lectures and consults on media business issues worldwide.