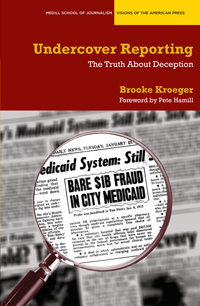 In 2007, investigative journalist Ken Silverstein went undercover to test Washington lobbyists’ taste for sleaze. Using an alias, Silverstein created a fictitious energy firm that ostensibly did business in Turkmenistan and approached professional lobbyists to see if they could help cleanse the regime’s neo-Stalinist reputation. The bill for services rendered—newspaper op-eds bylined by established think-tankers and academics, visits to Turkmenistan by congressional delegations, and other exercises in public relations—would have been about $1.5 million. (Disclosure: I consider Silverstein a friend.)

But when Silverstein’s piece, “Their Men in Washington: Undercover With DC’s Lobbyists for Hire,” was published in the July issue of Harper’s, the resulting uproar had less to do with craven lobbyists than with journalistic impropriety. Various critics assailed Silverstein for his charade: Washington Post media reporter Howard Kurtz, an ethics expert at the Poynter Institute, a CBS News blogger, an American Journalism Review writer, and other notables. Journalists shall not lie, the critics mainly agreed. Doing so diminishes their credibility and that of the entire profession.

But Silverstein’s subterfuge was no outlier, as Brooke Kroeger demonstrates in her comprehensive history and exercise in soul-searching, Undercover Reporting: The Truth About Deception. For more than 150 years, American journalists have been playing make-believe to get themselves thrown into jails and loony bins; conniving their way into punishing factory jobs; and posing as high school students, Ku Klux Klan members, and even pregnant women in search of abortionists.

Journalists have even fashioned Mission: Impossible scenarios to snare wrongdoers, as the Chicago Sun-Times did in 1978, when it acquired a downtown bar, named it The Mirage, and staffed it with reporters. The paper documented, in a 25-part series, payoffs to city health inspectors, shakedowns by state liquor inspectors, tax fraud, kickbacks, and other crimes. The series was regarded as both a sensation and an abomination—although a Pulitzer Prize jury tapped it for an award in the Local Investigative Specialized Reporting category, the Pulitzer board overturned the jury’s selection because it disapproved of the Sun-Times’s methods.

Kroeger approaches the genre as a fan and champion. Her goal, largely accomplished with this book, is to polish undercover’s tarnished image and restore it to the place of respect (or semi-respect) it once enjoyed. Kroeger aims to establish undercover reporting as a common technique, not just the work of a few rogue reporters—and to convince journalists that it ought to be used more often.

Her restoration project does not suffer for raw material. A reporter for Horace Greeley’s New York Tribune used a variety of cloaking strategies while covering the American South just before the Civil War, including lying to sources about where he was from and changing “names, places, and dates” in his dispatches to avoid detection. In 1887, New York World reporter Nellie Bly became famous for impersonating a lunatic to gain admittance to a madhouse so she could report on its awful conditions. Between the 1960s and the 1990s, Kroeger writes, a variety of mainstream newspapers exposed housing discrimination by having black and white reporters pose as home buyers or prospective tenants. Gloria Steinem’s scored a cultural exposé in the early 1960s when she used her grandmother’s name and Social Security number to get a job as a Playboy bunny and wrote about it for Show magazine. In 1992, ABC News exposed substandard meat-handling practices at Food Lion, but told a raft of lies to get its reporters inside as employees.

Kroeger’s point with all this historical research is to put undercover reporting on a continuum, from no-lie investigations on one end to Mirage-style theatrics on the other. But she gives what I consider to be an over-expansive definition of undercover reporting. Almost any project that has relied on any combination of deception and subterfuge to expose a story of public importance seems to qualify. For instance, her lead example is the 2007 Washington Post series by Anne Hull and Dana Priest about the deplorable treatment of patients at Walter Reed Army Medical Center. As Kroeger acknowledges, Hull and Priest never assumed false identities in their reporting. They told no lies and donned no disguises. Yes, they shunned personnel who might ask them nosy questions, and they didn’t ask officials for permission to report at the hospital. But if such evasive maneuvers equal “undercover reporting,” I would hypothesize that 75 percent of all working reporters have at one time or another in their career gone “undercover,” too.

Kroeger juxtaposes the Hull and Priest investigation (and “no-lie” investigations like it) with the work of aggressive journalistic liars because she finds unity in the two techniques, and wants to explore “whether there is really a difference for a journalist between not ever telling a lie—emphasis on the word telling, because lies, to qualify as lies, are verbalized—and the deliberate projection of a false impression with the clear intention to mislead, to deceive.”

But placing the Walter Reed investigation inside the same journalistic genus as the Mirage series constitutes a grievous taxonomical error. The “deliberate projection of a false impression” is something reporters do almost daily. When an official inadvertently spills the beans during an interview, the smart reporter suppresses his excitement and caps his pen in hopes that the official will dig himself in deeper. Such deliberate projections, by the way, must rank among the most common human activities. Parents scowl at their children to make them behave when they’re really not angry; buyers feign nonchalance to convince sellers to lower their prices; and so on.

In my mind, there is a world of difference between the two undercover genres. Compare, for example, the famous workplace investigations conducted by Tony Horwitz, Charlie LeDuff, and Barbara Ehrenreich, which Kroeger neatly summarizes, and the works of Silverstein, the Chicago Sun-Times, and James O’Keefe and Hannah Giles, the BigGovernment.com contributors who pretended to be a pimp and prostitute in order to embarrass the advocacy group ACORN.

When Horwitz and LeDuff went to work at slaughterhouses for The Wall Street Journal and The New York Times, respectively, and Ehrenreich took menial jobs for her book about the working poor (Nickel and Dimed), the lies they told were de minimis. Ehrenreich, for example, omitted from job applications parts of her distinguished academic record. They created no new scenarios by their actions—they merely slipstreamed themselves into a story already in progress. Once there, they did little or nothing to contaminate the reportorial soil.

Silverstein, the Sun-Times, and O’Keefe, meanwhile, didn’t just contaminate the soil, they created it by telling their fictions. They then invited people from K Street, the Chicago bureaucracy, and ACORN to join the casts of their improvisation. The difference is between writing about a world that already exists, and conjuring one to embarrass the potentially guilty, a distinction Kroeger seems not to want to accept.

I would be misrepresenting Kroeger if I implied that she defends every lying reporter ever to carry out a convoluted sting. In her preface she writes that “at its best, undercover reporting achieves most of the things great journalism means to achieve. At its worst, but no worse than bad journalism in any form, it is not only an embarrassment but can be downright destructive.” I wish she were more judgmental about some of the techniques some reporters use, but Undercover Reporting is not that kind of book. If you are the type who seeks a thumbs-up or thumbs-down on every controversy, Kroeger is not writing for you.

You can sense her disapproval when she compares James O’Keefe’s ACORN sting with Ken Silverstein’s, but she doesn’t come out and say what I think she’s thinking: that O’Keefe is a crackpot and Silverstein is a genius. Instead, she writes, “What is most important in these cases is the exercise of sound journalistic judgment: to establish first if the deception was important enough to perpetrate, and after that, if accepted journalism standards have been fully adhered to and met, and if that can be reliably verified.”

If you’ve ever reported a story, you automatically understand the appeal of telling lies to get to the truth—they can be a wonderful shortcut! Conventional shoe-leather reporting requires time, sources, and energy, and must produce genuine findings in order to get published. But lie-based journalism works like EPO on both journalists and readers—it permits journalists to write bigger and faster (as if they’re writing a review of their own improv drama!), and the cat-and-mouse quality of the deception gives readers an extra, entertaining thrill. Not that giving readers a thrill is a bad thing, but I draw the line at turning news stories into episodes of Punk’d. Kroeger appreciates this, writing that even the well-intended sting can backfire and “veer off into the ridiculous or purely sensationalistic.”

Undercover Reporting intends to provoke its readers, and it did me. If an editor thinks he should launch an investigation with overt lies because overt lies pave the quickest path to the hard-to-get truths, why should he stop there? Why not have his reporters pepper whole, hard-to-get stories with plausible lies and half-truths as long as they propel a story to the ultimate truth? Why not lie to readers, too? We journalists don’t trust sources who lie. Then why should we trust reporters who do the same? When I was an editor, I occasionally had trouble keeping my less-scrupulous writers on the straight and true. When I imagine giving them—or even my most conscientious reporter—a license to make things up in order to get a story, my mind derails. Kroeger’s thoughtful openness to telling direct lies has turned me full-force against the technique.

Has America ever needed a media watchdog more than now? Help us by joining CJR today.
Jack Shafer writes a column about the press and politics for Reuters.