The First Amendment Bubble: How Privacy and Paparazzi Threaten a Free Press
By Amy Gajda

In late August, someone anonymously posted hacked nude photographs of the actress Jennifer Lawrence and other celebrities on an internet bulletin board. Celebrity blogger Perez Hilton posted the photos on his gossip website. Shortly afterward, buffeted by angry social-media responses and the specter of litigation, Hilton apologized and took them down.

Any second-year law student could concoct a legal “defense” to an invasion of privacy claim by Lawrence: These are truthful images of a public figure who has courted public attention worldwide. Hilton broke no laws; he simply showed images made public by others, heightening awareness of the important controversy over internet privacy. 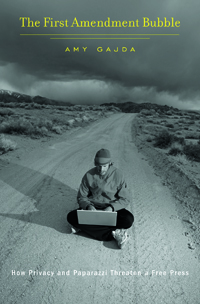 It’s not a good defense, though. I think a court could reject it without doing damage to the First Amendment. Amy Gajda, a former broadcast journalist turned law professor, would probably agree. But she also would worry that more cases like this one would, in time, erode freedoms for serious journalism.

The Lawrence flap occurred too late to be included in The First Amendment Bubble: How Privacy and Paparazzi Threaten a Free Press. The book begins with an account of a video posted on Gawker in 2012 of the professional wrestler Hulk Hogan in a private sexual encounter. A Florida state trial judge ordered Gawker to take it down, showing, in Gajda’s words, “a new willingness to limit public disclosure of truthful information.”

The federal courts quickly stepped in to reverse this result, she notes; the Hogan tape, in all its glory, remains available online today. So the courts’ “new willingness” might more properly be called ambivalence. Gajda nonetheless believes that the “new willingness” is growing stronger, and that the obtuseness of mainstream media outlets runs the risk of making things worse. “[T]here seems to be a modern-age shift back toward 1890s sensibilities,” she writes.
“[C]ourts are signaling a new sensitivity to threats to privacy posed by evolving social and cultural conditions.”

Gajda succumbs to the tendency to see even minor slights to press freedom as omens of onrushing dystopia.

She compares this perceived shift to the effect of a famous legal essay, “The Right to Privacy,” published by Louis D. Brandeis and Samuel Warren in 1890. Warren and Brandeis argued that courts should recognize a “right to be let alone” that would prevent the disclosure of personal information, even if truthful and interesting to readers. The essay sparked the creation of a new tort, invasion of privacy, which has occasionally given rise to judgments against media for publishing misleading or embarrassing information about ordinary people.

But it did not also spark a contraction of press freedom; quite the reverse, in fact. Over the next century, as Gajda notes, the Supreme Court’s decisions granted the American media extraordinary freedoms. Indeed, I would argue that the American media are today the freest—by far—in world history. Those decisions have made it almost impossible to enjoin news media in advance of publication, punish them criminally after publication (even for publishing government secrets), or collect damages from them for false and defamatory reports about famous people. The protection of privacy and emotional serenity has been similarly narrow.

Now, however, Gajda says, there is a “nascent trend of favoring privacy over press rights.” She blames this adverse tide on the rise of what she calls “quasi-journalism,” such as Gawker, and on a false confidence by mainstream media that they are still the favored children of the federal courts. Press advocates and publishers, she notes, cling to “First Amendment absolutism”; they resist efforts to define “journalist” (for purposes, say, of a federal shield law), to embody notions of privacy even in unofficial media codes, and to question the Communications Decency Act’s broad protection for internet service providers. Courts have largely been content to allow media themselves to define what is newsworthy, and thus presumptively privileged to report. That deference may be at an end, and the profession needs to change its ethos, Gajda contends.

Certainly, in an era when European courts are inventing another new right, the right to be left alone, vigilance is required. The heart of this book, however, is a survey of recent cases that, to Gajda, illustrate that “nascent” shift—and I read this evidence differently. To begin with, the US Supreme Court under Chief Justice John Roberts has voided laws banning films of animal cruelty, regulating sales of violent video games, and penalizing lies about military decorations. Perhaps most startling, it also barred a tort suit by a grieving military family against homophobic protesters near their loved one’s funeral.

The military-funeral decision, Snyder v. Phelps, was astonishingly broad. The Westboro Baptist Church’s message—that God wants marines to die because the nation tolerates homosexuality—was speech “on a matter of public concern” and thus “entitled to ‘special protection’ under the First Amendment,” the majority concluded. “Special protection” is powerful language for what is, after all, hate speech. Gajda, however, focuses on a footnote: “[T]he Justices also seemed to suggest that the published word aimed at a particular individual may not be protected in the same way” as the anti-gay demonstration was, she writes. The footnote said simply that, “an internet posting may raise distinct issues.” It reports that the family had not preserved a claim based on Web posts, and that the court could therefore not decide it. This is appellate procedure, not First Amendment dictum.

I take issue with Gajda’s interpretation of much of the case law cited in The First Amendment Bubble. She reports, for example that a federal court “decided in 2011 that a blogger’s posts involving a bankruptcy trustee . . . were not of public concern because there was no evidence that the public had paid any attention to the private company’s collapse.” Obsidian Finance v. Cox is a complex case, but she fails to note that the Ninth Circuit eventually found that the blog posts did address “a matter of public concern.” To my eyes, the ruling is a stunningly robust protection of speech. Elsewhere, she argues that “some judges” are suggesting that “accidents are not newsworthy”; her evidence is DeSirey v. Unique Vacations—a case about a dune buggy accident in which American press freedoms were not remotely involved. The defendants wanted a trial in St. Lucia, where the accident occurred. They argued that tourism was of “public interest” to the island resort’s press. The judge held that “this relatively straightforward tort suit does not automatically become of broad public interest in St. Lucia merely because it involves the tourism industry.”

Gajda over-reads a number of the cases she cites. I suspect these mistakes arise from the same unconscious phenomenon Gajda correctly decries: a tendency by many in the media, and media law, to view even minor slights to press freedoms as omens of onrushing dystopia. Gajda is certainly right to worry that the rise of rapacious, pervasive new media will require new concepts, new legal language, and perhaps new forms of regulation. If serious news outlets are maladroit, absolutist, and arrogant, the result may be the eventual narrowing of our remarkable regime of free speech and press. At the present, though, I feel not fear but astonishment at the robust legal protections forged over the past two decades for what the Supreme Court has called “the vast democratic forums of the internet.”

Has America ever needed a media watchdog more than now? Help us by joining CJR today.
Garrett Epps teaches constitutional law and First Amendment at the University of Baltimore. He is Supreme Court correspondent for The Atlantic Online. A former reporter for the Washington Post, he is the author of American Epic: Reading the US Constitution and American Justice 2014: Nine Clashing Visions on the Supreme Court. This story was published in the November/December 2014 issue of CJR with the headline, "Fear not."