Behind the Beautiful Forevers: Life, Death, and Hope in a Mumbai Undercity | By Katherine Boo | Random House | 256 pages | $27

Long known as one of America’s most astute chroniclers of domestic poverty, New Yorker writer Katherine Boo chose to report her first book elsewhere: in Annawadi, a slum at the edge of Mumbai’s international airport. This wasn’t the most obvious choice. Though Boo’s husband is Indian, her own poor health, lack of language skills, and outsider status threatened to make such a reporting project prohibitively difficult. Eventually, though, she concluded that she had little to lose and much to gain from heading to a place that many people—Indians and non-Indians alike—would rather avoid.

Behind the Beautiful Forevers, a book that stands with the best long-form immersion reporting, confirms that she made the right decision. Although the book raises vital questions about inequality, it is not a treatise; at its richest, it offers the most emotionally resonant quality of contemporary fiction—closeness of point of view—and pairs it with investigative reporting so dense that sometimes it takes her only a sentence to refute the cant, half-truths, and hypocrisy that the powerful offer when talking about and dealing with the poor.

The book begins in medias res with Abdul Husain, a teenage garbage-sorter, fleeing a false story that threatens his whole life and livelihood. Abdul, his father, and his sister stand accused (wrongly, we are swiftly given to understand) of setting their neighbor Fatima, a.k.a. the One Leg, on fire. The boy—his family’s main breadwinner—finds himself “mule-brained with panic” and he flees to a storeroom of trash he hopes will hide him from a crime he did not commit.

The teenager has lived a life of small ambitions. While others in Annawadi “now spoke of better lives casually, as if fortune were a cousin arriving on Sunday, as if the future would look nothing like the past,” Abdul has aspired only to be married to a good wife who won’t mind the smell of his profession. “Like most people in the slum, and in the world, for that matter, he believed his own dreams properly aligned to his capacities,” Boo writes. Even this wish now seems impossible. Abdul ultimately surrenders to the law, hoping to spare his ailing father the ordeal; instead, all three accused Husains begin a journey through the justice system.

Throughout the book, Boo meticulously bridges chasms between fact and official records. (In an author’s note, she says that she used India’s Right to Information Act to access most of the 3,000-plus public records she checked.) She knows, for example, which police constable raped a homeless flower seller; and the amount an aspiring slum boss says she needs to get the police to stop beating Abdul’s father, who—along with his son—spends time in an off-the-books prison cell. The parade of fabrications are woven so consistently into the narrative that one gets a sense of how regularly Annawadians see and suffer from such corruptions of the truth.

Boo resists facile analysis, letting the narrative speak for itself. When she does offer comment or context, it’s restrained and nuanced. We have the space to see the thinking behind any action. During the Husains’ legal troubles, for instance, the family declines several opportunities to address their problems extrajudicially. But it’s not just a matter of moral rectitude; sometimes, Boo reveals, they’re acting out of practical concern—they’re not sure the people asking for bribes have the power to help them.

In a 2009 New Yorker piece, Boo very subtly compared the poverty of the airport slums with the world of Slumdog Millionaire, a film in which a poor Indian boy uses lessons learned from his childhood to win big on a game show. Here, as in that article, Boo demonstrates that the slumdwellers’ victories are quieter. I nearly cheered aloud when I read of Abdul’s father defying a bribe-seeking official. He knows that she is lying about how the legal process works—because he has been reading Urdu newspapers. (Go, journalism!) Still, the lessons the Annawadians learn aren’t neatly instructive, and their stories never quite resolve.

Boo’s willingness to acknowledge complication and contradiction is only one strategy she deploys to resist reducing the slum’s inhabitants to representatives for Our World’s Problems. Most notably, she gives us access to the slumdwellers’ consciousnesses, and deeper still, their imaginations. These are among the book’s most moving passages, and finest feats of reportorial self-effacement. The depth of Boo’s reporting enables her to achieve the close point of view usually reserved for fiction. (Disclosure: Like Boo, I am published by Random House, but as a novelist.) 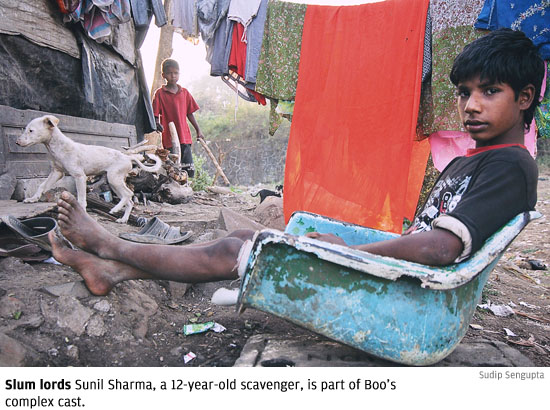 We have what feels like almost total access to Abdul’s point of view, and his observations serve as an arc in which his concern for his own heart and humanity evolves and changes. Abdul begins by wanting little and having hardly any time in which to think. Imprisonment, oddly, gives him time to develop theories more complex than his original assessment “that in Annawadi, fortunes derived not just from what people did, or how well they did it, but from the accidents and catastrophes they avoided. A decent life was the train that hadn’t hit you, the slumlord you hadn’t offended, the malaria you hadn’t caught.” Boo charts an emotional and moral journey that heartens, surprises, and saddens.

Although the story begins—and, indeed, ends—with Abdul, a constellation of friends and fellows shines around him: the youth of Annawadi, with their dreams of varying heights. In addition to Abdul, for instance, we meet 12-year-old scavenger Sunil, who looks after a younger sister, only to be troubled by her outgrowing him; recruited to join a band of thieves, he balks, fearful that he won’t like himself as a robber. Later, when he does become a thief, he regrets the way his face has changed.

Despite some of their parents’ efforts to teach them that self-interest is the only survival skill that matters in Annawadi, the children form friendships and alliances. Boo gives us a window into their willingness to be kind to each other through difficult circumstances. In several instances, older boys attempt to look after and counsel younger ones. Two girls, of different castes and with differently oppressive mothers, cultivate a friendship based on regular escapes to the public toilet. Not all of these friendships end smoothly or well, but their threads form a spider web of care that catches what the future could be.

Spending much of her time with Annawadi’s women and children, Boo captures their complex interior lives. These characters, too, are many-sided. Ash, the aspiring Annawadi slumlord and Shiv Sena politician, justifies her Machiavellian schemes by considering how they might profit her daughter, Manju, who runs a school more diligently than the authorities require, and who hopes to be a college graduate and teacher someday. (Much of Manju’s education consists of memorizing summaries of books she hasn’t read.) In one of the most breathtaking sequences, two families fight, but when tradition dictates that common religious background means helping with a funeral, Boo shows the bereaved’s opponent aiding with no hesitation. This is the pleasure of Boo’s storytelling; everyone is capable of both righteousness and its opposite.

In the long, frank author’s note, Boo reveals some things about her methods of reporting, the instances in which her presence changed the situation, and the long conversations she had with young people like Abdul about what they felt and thought. “Abdul and Sunil, for instance, had previously spoken little about their lives and feelings, even to their own families. I came to my understanding of their thoughts by pressing them in repeated (they would say endless) conversations and fact-checking interviews,” Boo writes in her author’s note. Some may doubt the authenticity of such a narrative when Boo is not Indian and had to rely on translators to do this kind of work. As for me, I hate the word authenticity. True, translations are rarely perfect. But even a story paraphrased or retold in the same language changes. Why do we pretend that languages are pure? That stories can or even should stay the same every time they’re told? Yes, things do get lost in translation, but, as Boo observes, had she only spoken to those who knew English, she would have distorted the story in another way. And to argue that this story belongs to an Indian reporter would be fundamentally small-hearted: It would suggest that we should observe rather than exceed our limits in our attempts to connect with other people.

It should be obvious that anyone—rich or poor—is more than the sum of his or her circumstances, that any life could be worth writing about. But apparently it’s not. This seems to me the sign of an even larger (if related) problem: an enormous collective failure of reading and imagination. As we march forward into the world of instant connection and somewhat out of the world of quiet reflection, books retain a certain crucial advantage: the opportunity to enter someone else’s mind in a way that feels intimate and real. I have long thought of this as the special province of fictional narrative, but with Behind the Beautiful Forevers, Boo shows that the right reporter can open that most human door.

Has America ever needed a media watchdog more than now? Help us by joining CJR today.
V.V. Ganeshananthan , a journalist and fiction writer, teaches creative writing at the University of Michigan. She is a former vice president of the South Asian Journalists Association and a founding member of Lanka Solidarity. Her debut novel, Love Marriage (Random House, 2008), is set in Sri Lanka and its diaspora, and was named one of Washington Post Book World's Best of 2008.