All the Truth Is Out: The Week Politics Went Tabloid
By Matt Bai 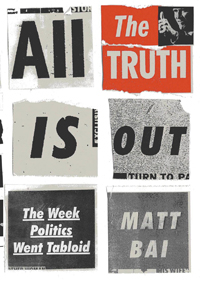 Matt Bai’s elegant new book, All the Truth Is Out: The Week Politics Went Tabloid, borrows its title from the opening line of a W.B. Yeats poem that Gary Hart committed to memory and recited to Martin O’Malley, now governor of Maryland.

The narrator of the poem, “To a Friend Whose Work Has Come to Nothing,” counsels a man who is “honor bred . . . to a harder thing than triumph” that his challenge is to “be secret and exult” in the face of shameless lies. Hart, then in the last throes of his twice-aborted 1988 presidential campaign, identified.

Bai’s title embodies the wry humor and empathy that make All the Truth Is Out such a compelling read. One obvious irony is that “all the truth” about Hart—whose campaign dissolved in 1987 following charges of adultery with a model-actress-pharmaceutical rep named Donna Rice—still isn’t known. Apart from the principals, no one can pinpoint what transpired between Rice and Hart, although it was clearly more than either admitted at the time.

But this “truth” is the most trivial of concerns, its pursuit a blemish on the careers of the reporters who sought it through physical and verbal ambushes, Bai believes. The truth Bai is after is something larger and more substantial. Bai argues that Hart’s fall unleashed what President Bill Clinton would later call “the politics of personal destruction,” and that the fixation of the media on the ill-defined “character issue” constituted a tragedy for the entire country.

“Hart’s humiliation,” Bai writes, “had been the first in a seemingly endless parade of exaggerated scandals and public floggings, the harbinger of an age when the threat of instant destruction would mute any thoughtful debate . . . .” Meanwhile, “a series of more genuine tests of character for a nation and its leaders—challenges posed by industrial collapse, the digital revolution, energy crises, and stateless terrorism—went unmet, with tragic consequences.”

How exactly did Hart—campaign manager to George McGovern, political visionary, progenitor of “New Ideas,” Atari Democrat—come to be derailed from what seemed to have been his destiny? Bai, the national political columnist for Yahoo News, speculates on the cultural and technological forces at work. He thrillingly reconstructs the debacle itself. Finally, he reexamines that charged political moment from a contemporary perspective, drawing on the reflections of Hart, Rice, Hart’s campaign aides, and the reporters involved.

Bai indicts not just the burgeoning culture of celebrity and its preoccupation with sexual peccadilloes, but technological changes that include the rise of videotaping, the fax, and the laptop computer. There were other factors, too, specific to the media, which had ignored the adulterous adventures of both John F. Kennedy and Lyndon B. Johnson. Before Hart, but not long before, Bai reminds us, there was Watergate, fueling the profession’s self-regard and its growing bloodlust for the (Pulitzer-worthy) takedown.

And Hart had a target on his back: He had twice been separated from his wife, Lee, and had dated other women during those separations (and perhaps not only then). Rumors were in the air, he was the frontrunner, and the press pack found him “weird” and standoffish.

In reconstructing the ensuing cataclysm, Bai draws heavily on the late Richard Ben Cramer’s masterly tome about the 1988 presidential race, What it Takes. Like a great modernist novelist, a James Joyce of New Journalism, Cramer told the story of the campaign from deep inside each candidate’s psyche. He captured Hart in all his infuriating self-righteousness as he was hounded by an increasingly rabid press corps.

But Bai also uses Cramer to make a larger point—that, after the 1988 campaign, candidates would increasingly shield themselves from unguarded moments with reporters. What it Takes, Bai writes, was “a bridge between the last moment, when generations of politicians had trusted most journalists and aspired to be understood, and the next, when they would retreat behind iron walls of bland rhetoric, heavily guarded by cynical consultants.” Cramer, Bai suggests, spawned a legion of (flawed) imitators whose obsession with unflattering revelations ironically made true intimacy impossible.

But time, even if it does not heal, can encourage candor. And Hart, now 77 and with little left to lose, let Bai in, as much as he has any reporter since perhaps Cramer. Bai had first interviewed Hart for a 2003 New York Times Magazine story about what he calls Hart’s “quixotic comeback bid for the presidency,” which he never actually launched. Even then, Bai was charmed. “Whatever arrogance he had once possessed, a famous incapacity for suffering those less intellectually inclined than himself, had been replaced in his advancing years by a sense of goodhearted resignation, which had the effect of making him immediately and immensely likable,” he writes. He adds that Hart was “the flat-out smartest politician I had ever met.”

Still married to Lee, Hart admitted to having made a mistake (but not to an affair) with Rice, but also said: “This whole business of ’87 is flypaper to me. It’s so frustrating. It’s like being in a time warp. I want to get unstuck.”

Bai’s story revisiting the scandal didn’t help, and All the Truth Is Out is, in part, an act of atonement. It is often reverential toward Hart, whom Bai sees as the most prophetic and philosophical of politicians. But it also underscores some awkwardness in his five-decade-long marriage, and details errors Hart made in handling the Rice situation.

Bai retains some empathy, too, for individual reporters trying to find their way through the thickets of a shifting landscape. And he makes his own small contribution to the narrative of that time: He finds the tipster who called The Miami Herald’s estimable political reporter Tom Fiedler, accused Hart of having an affair with Rice, and told Fiedler that Rice would be flying to Washington for a weekend with the candidate. “I’m sorry to ruin his life,” she tells Bai.

The Herald’s stakeout of Hart’s townhouse was, in Bai’s telling, a farcical and amateurish affair that never established that Rice had spent the night. Nevertheless, the resulting Sunday story, on May 3, 1987, borrowed the staccato cadences of Woodward and Bernstein, evoking Watergate-level corruption. Reading it, Bai comments dryly, “You might think Hart had been caught bludgeoning a beautiful young woman to death, rather than taking her to dinner.”

The most indelible image of Hart’s flirtation with Rice dates from an earlier encounter and wasn’t published by the National Enquirer until after he had left the race. It was a photograph, taken by a friend of Rice’s, of the former South Carolina beauty queen on Hart’s lap. He is wearing a T-shirt with the name of the yacht, Monkey Business, on which they sailed to Bimini.

Bai counters with a series of (almost) equally arresting images: a helpless Rice being swarmed by the press on the way to a ladies’ room; Hart dropping by his friend (and former New York Times Company executive) Sydney Gruson’s New York apartment at the height of the scandal and savoring the stunned faces of Gruson’s dinner guests; Bob Dole expressing gruff sympathy as he and Hart prepare to address a group of newspaper executives; Lee Hart lying on a car floor to elude the press horde that had descended on the Harts’ cabin in Troublesome Gulch, CO.

Bai discerns valor in Hart’s quick withdrawal from the race, just days after the Herald article. With The Washington Post threatening to break another story about an alleged Hart liaison, Bai says the candidate became “increasingly distraught” at the thought of all the women he’d known—romantically or otherwise—finding their lives exposed to public scrutiny. One such woman had written Hart and threatened to kill herself if reporters knocked on her door, Hart tells Bai. Nonetheless, his desire for vindication apparently overcame his chivalry when, in December 1987, he reentered the race.

There is an undertow of sadness in the recollections of the reporters involved in these events—in addition to Fiedler, The Washington Post’s Paul Taylor, who asked the famous adultery question that Hart couldn’t quite answer, and The New York Times’ E.J. Dionne, whose magazine story featured Hart’s unfortunate “follow me around” challenge.

These reporters “would often struggle and contradict themselves in an effort to make sense of the rules they had constructed,” Bai writes. “The truth was that all this business about judgment and character was a rationalization, and not a very persuasive one.”

Also by this author: A parting shot: Michael Hastings’ posthumous novel skewers the media elite. Care and feeding of the press: Roosevelt did it, Taft did not, and that made all the difference. Hard lessons: Finding hope in the effort to reform America’s public schools

If Hart ushered in a new sort of political theater, the drama wasn’t always a tragedy. Clinton, whose sexual indiscretions seemed inextricable from his personality, suffered ridicule and impeachment, but survived to become a beloved elder statesman. Bai has an ingenious explanation:

In the Age of Show Business . . . , the measure of a leader became his hunger for the game, his talent for dazzling crowds, his deftness at surviving an unreasonably brutal and small-minded process  . . . . We set traps and then marveled at those who could escape them with Houdini-like grace, which is why Clinton came to be known, almost universally, as the most talented statesman of the age, despite having achieved little of his governing agenda.

Hart paid the price for being first, as well as for being stubborn and prideful—in short, to Bai at least, a man of principle. Unlike such spotlight-craving figures as Eliot Spitzer and Anthony Weiner, he disdained either to capitalize on his notoriety or to publicly abase himself. No apology tour, no lectures on self-reinvention. He remained an exile, emerging most significantly in the late 1990s to co-chair a national security commission that warned, presciently, about “stateless terrorism.”

Bai has the fascinating correspondence between Clinton and Hart, in which Hart lobbied, with little success, for other jobs. He also shares a poignant recollection by Hart about perusing a lengthy job application from the new Obama administration. The questionnaire asked whether the applicant had ever had any association “that could be used—even unfairly—to impugn or attack your character . . . .” Hart, laughing, told Bai he had considered writing: “Are you kidding me?”

Has America ever needed a media watchdog more than now? Help us by joining CJR today.
Julia M. Klein is a longtime CJR contributor and a contributing book critic for The Forward. She is a cultural reporter and critic in Philadelphia. Follow her on Twitter @JuliaMKlein. This story was published in the September/October 2014 issue of CJR with the headline, "Original sin."