We are deep in the journalistic trenches, mourning the shrinking and shuttering of newspapers and magazines, bemoaning declining salaries and freelance rates, jawing about the elusive new business model that will somehow reverse all these trends.

Now comes Scott Timberg, an arts reporter laid off by the Los Angeles Times in 2008, to tell us that we are not alone. Not that this assurance should be mistaken for reassurance. According to Timberg, America’s entire creative class—a group he defines as embracing everyone from rock musicians and architects to bookstore clerks—is under assault. In his view, the slow death of print, our obsession, is just one manifestation of a much broader and more troubling crisis.

Expanding on stories that Timberg wrote for Salon, Culture Crash is not just a cri de coeur for an endangered set of jobs and institutions. It also is an audacious, if undeniably speculative, effort to detail the causes of these cultural tremors, and to point the way toward possible solutions. 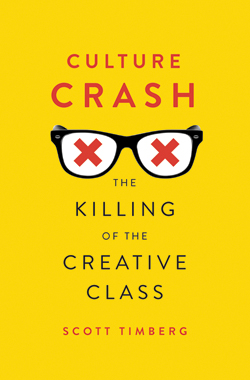 The roots of the problem, Timberg argues, lie deeper than the latest economic downturn or technological upheaval. “Though highlighted and exacerbated by the Great Recession, these shifts started earlier and almost certainly will extend for years into the future,” he writes. “The arrival of the internet and the iPhone, while crucial, are not the only forces at work here.” Casting a wider net, Timberg implicates such factors as the rise of postmodernism, the (possibly related) devaluing of the arts and humanities, and an unforgiving winner-take-all marketplace.

Culture Crash is an ambitious manifesto on two fronts. First, Timberg yokes together a raft of developments—some clearly parallel, others less obviously related: the struggles of the music industry to counter bootlegging and cut-rate streaming; the burgeoning of the freelance sector (and its simultaneous impoverishment); the pressures on journalism and book publishing; shifting emphases in higher education.

Second, he links these phenomena to what he sees as a decades-long attack—some of it fueled, ironically enough, by the creative class itself—on “middlebrow” culture. As Timberg defines it, this is the consensus culture represented by publishers’ book clubs, Leonard Bernstein, PBS and NPR, well-made blockbuster films, and the long-gone bipartisan support for the National Endowment for the Arts. For Timberg, “middlebrow” is not a pejorative but something of a rallying cry—a correlative to a middle class that is itself under threat.

In Timberg’s view, both this culture and its middle-class audience, not to mention the creators of culture, have been crumbling in tandem. And the stakes, he writes, are high: “The price we ultimately pay is in the decline of art itself, diminishing understanding of ourselves, one another, and the eternal human spirit.” Timberg’s prognosis is at once overwrought and worrisome—more so certainly than the recurrent headache of a few thousand unemployed and underemployed journalists. In the end, Culture Crash is about a cause that is also a result—a problem that a pessimist might judge intractable.

For his notion of the creative class, Timberg acknowledges a debt to the urban-studies theorist Richard Florida. In his 2002 classic, The Rise of the Creative Class, and in subsequent work, Florida has explored the role of a subgroup of intellectuals and professionals in fueling urban economic development. Timberg, by contrast, tracks the decline of this class—a viewpoint reinforced by the recent recession and by his own definitional shift. Timberg rejects Florida’s concept of the creative class as “anyone who works with their mind at a high level,” including “research scientists, medical professionals and software professionals.” Instead, he opts to construe the class both more narrowly and more broadly—as “anyone who helps create or disseminate culture.” That means scientists, doctors, and software developers are out, and “deejays, bookstore clerks, theater set designers, people who edit books in publishing houses and so on” are in.

Timberg’s other starting point is his personal narrative: He was one of hundreds of workers laid off at the Los Angeles Times under real-estate mogul Sam Zell. After his layoff, Timberg and his family struggled financially and eventually lost their house. Timberg says he knew many others—architects, a photographer, a graphic designer, a landscape painter—in the same economic boat. So he started chronicling the phenomenon.

“My main concern . . . ,” he writes, “is seeing not simply that creativity survives—that aspect of human experience will never entirely die—but that its exercise remains open to any talented, hard-working person.” The issue, he says, comes down to America’s “founding myth and national folklore: the idea of meritocracy.” (Timberg doesn’t tease out the implications of his own formulation—that the meritocracy is largely mythical, since success has always depended on luck, gender, race, and the right parents, as well as talent.) Timberg’s argument is that, if we don’t take care, “culture work will become a luxury”—a development already manifest in the proliferation of unpaid journalistic internships and the plummeting rates for freelance writing, photography, and similar endeavors.

Timberg unpacks case studies of three cultural utopias, fostered by both a critical mass of artists and the institutions and values that allowed them to make a living. He offers by way of example the poetry scene in Boston and Cambridge in the 1950s, with Robert Lowell at its center. Lowell’s students, Sylvia Plath and Anne Sexton, along with other poets—Adrienne Rich, Richard Wilbur, W.S. Merwin—all benefited from the availability of university teaching jobs, productions by the Poets’ Theatre, publication in literary venues, and other institutional support. Timberg also points to Los Angeles’ thriving arts community in the 1960s and Austin’s dynamic live-music scene.

In perhaps his most romanticized chapter, Timberg discusses the progressive disappearance of a whole class of culture workers—the clerks who once staffed record, video rental, and independent bookstores. (Timberg himself worked at Tower Records during the 1990s recession.) These vanishing stores, he argues, served multiple roles, providing day jobs for aspiring artists, curatorial expertise for customers, and a sense of community for both.

Timberg also touches on the new “gig economy,” where the rhetoric of branding and free agency runs up against the realities of life without security or benefits; the erosion of the music industry, and especially the plight of independent musicians; and the implosion of architecture, a field decimated by the Great Recession’s impact on the construction industry. (Architectural employment dropped nearly 30 percent in just three years.) Timberg adeptly marries data with anecdotes and quotes from impoverished musicians, former store clerks, and luminaries such as the poet and critic Dana Gioia, a former chairman of the National Endowment for the Arts.

Most of the developments he cites are explicable as the fallout from technological and economic pressures. But Timberg chooses to adopt Gioia’s perspective: “The problem isn’t the decline of the economy,” he tells Timberg, “though that doesn’t help. The problem is the collapse of culture.”

In a chapter titled, “Idle Dreamers: Curse of the Creative Class,” Timberg argues that anti-intellectual strains—always part of American life—have deepened in recent years, and that celebrity coverage has overwhelmed attention to the challenges faced by more typical working artists. It doesn’t help, he says, that newspapers have laid off as many as 80 percent of their arts writers since the turn of the century.

Timberg reiterates this plaint, which he has good reason to take personally, in a chapter on “The End of Print.” No doubt “critics and cultural journalists have helped shape culture and bring prestige to its makers for at least five centuries;” but other journalists, too, are storytellers, Timberg argues—and besides, many novelists initially honed their craft at newspapers. All these roles are imperiled, he reminds us. He underlines the unassailable point that the Web, while making it easy for just about anyone to publish, “has put downward pressure on freelance rates and salaries.” And, in another familiar refrain, he worries that the short attention span the internet tends to foster will spell the end of the more reflective and considered culture of print, if not print itself.

Probably the boldest claim that Timberg advances is his indictment of postmodernism as a destructive attack on culture with broadly deleterious consequences. This attack has emanated from the academy, not our profession—most journalists wouldn’t know postmodernism from a doorpost—but Timberg argues that we are all its victims. He offers a whirlwind tour of various critical schools—structuralism, “deconstruction,” feminist criticism, cultural studies—and says that they have leached the joy out of reading and other cultural pursuits. Even the avowedly populist Pauline Kael comes in for some bashing, for allegedly “championing the kind of work that did not really need a critic’s advocacy or interpretation.” In fact, Timberg’s crankiness is reminiscent of the reaction by earlier critics of modernism, who also lamented that the cultural world as they knew it was coming to an end.

Thanks largely to postmodernism, Timberg writes, we are graduating fewer (novel-reading, theatergoing) humanities majors. One could argue, of course, that practical considerations—including a spate of recessions and the sexiness of high-paying Wall Street, consulting, and tech jobs—have been more decisive in this decline.

Timberg understands that his vaunted “middlebrow consensus,” with its “shared body of artistic and intellectual touchstones,” had its limits. Still, he wants it back. And his most concrete suggestion, inspired by the European model, is to beef up public funding for arts and culture—a somewhat utopian idea unlikely to counter all the other pressures on print culture, indie music, and embattled freelancers.

Hardly the last word on the subject—not even, one would hope, the last word in print—Timberg’s Culture Crash is a well-intentioned effort to further a nascent discourse. Timberg hasn’t proven his case; it may indeed be impossible to prove. His erudition, in fact, represents something of a counterargument—an indication that our culture, while perhaps speeding toward annihilation, has not yet hit a brick wall.

Has America ever needed a media watchdog more than now? Help us by joining CJR today.
Julia M. Klein is a longtime CJR contributor and a contributing book critic for The Forward. She is a cultural reporter and critic in Philadelphia. Follow her on Twitter @JuliaMKlein. This story was published in the November/December 2014 issue of CJR with the headline, "It's not the economy, stupid."