Distant, disdainful of Washington, somewhat depressive, and famously imperturbable, Barack Obama has been the object of intense fascination—and much frustration—among the Beltway press. What do they see? A talented politician uninterested in politics; a transcendent speechmaker who can be drily professorial; a cerebral pragmatist who has presided over rageful, polarized times. 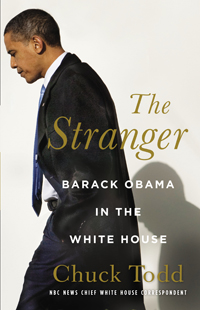 As a White House correspondent for NBC since 2008, Chuck Todd has had a plum perch from which to eye his quarry. The product of all that observation is The Stranger, the latest entry in the booming genre of Obama studies. The book is ambitious: Todd attempts a comprehensive analysis, from candidacy to troubled second term, and a forecast of where Obama “will land in the history books.”

But if The Stranger is revelatory, it’s not in the way Todd intended. For all his strengths (and they are myriad), Todd has written a disappointing book, a slab of pedestrian punditry marbled with occasional insight. The Stranger purports to tell the story of a president who couldn’t transcend his environment. The story it ultimately—and unwittingly—tells is of the perceptive political geek who couldn’t escape Beltway groupthink.

What do we expect from projects like Todd’s? Certainly, the White House correspondent’s proximity to the subject holds alluring promise—we hope to learn new things about the man in that impossible office. Peter Baker’s Days of Fire, about Bush and Cheney, was one notable recent effort, offering a privileged glimpse of a White House during a calamitous time.

Todd lambasts the GOP for its obduracy but upbraids Obama for not trying harder to win it over anyway.

The Stranger attempts to do the same for the 44th president. Beginning with the compelling story of Candidate Obama and going all the way up to President Obama’s struggles with a newly inflamed Middle East, the book presents an exhaustive tick-tock that conveys the sweep of a dismal decade benighted by war, recession, and protest. (In its recounting of the eruptions that consumed news cycles past, it also reminds you just how much of what we obsess over in the Drudge era barely rises to the level of footnote in retrospect.)

Profiles of Todd have made much of the duties he has juggled these past few years, between a daily TV show for MSNBC, dispatches for NBC’s website, and an active Twitter account. The overcommitment shows. A distracted work that lumbers around and sags in parts, The Stranger is a frustrating read—repetitive, disorganized, and inelegant. The book proceeds chronologically but is prone to unwieldy tangents: An account of the healthcare reform battle and the eruption of the Tea Party lurches into a digression on Tony Rezko and Jeremiah Wright; a chapter about Obama’s response to the Trayvon Martin shooting contains an out-of-place meditation on Senate Minority Leader Mitch McConnell.

The prose is at best workmanlike, with some passages skirting the line between conversational and inarticulate. Todd notes how one particular incident “became a thing on Twitter”; of the opening act at the GOP’s convention, Todd calls it “the weird Eastwood deal.”

The disappointment is especially acute because Todd isn’t some ordinary pundit. Indeed, his rise has in its way been as rapid and surprising as that of his subject. Ten years ago, when Barack Obama achieved superstar status following his appearance at the Democratic National Convention, Todd occupied the comfortable post of editor at National Journal’s Hotline, a daily political tip sheet that was a must-read for the cognoscenti but hardly a household brand. There he cultivated a reputation for data-driven analysis and hardcore wonkery, and won a devoted following.

In 2007, Tim Russert poached him and made him NBC’s political director, just in time for the most exciting election cycle in a generation. When Russert unexpectedly died in 2008, David Gregory took over at Meet the Press, and Todd (along with Savannah Guthrie) assumed the title of NBC White House correspondent. As his duties expanded at NBC, his profile—and the respect of peers—only grew. Nate Silver even singled out Todd as one TV pundit who was elevating campaign coverage.

This fall, Todd made his next leap, replacing Gregory in arguably the most revered chair in TV journalism. The increased stature has made him a ripe target for critics. In recent years, he has come under fire from both sides of the ideological divide. Glenn Greenwald has sneered that he is “as conventional as it gets”; the right-wing Newsbusters has a dossier on him a mile long.

But compared to most Beltway journalists, Todd has evinced something like conscientiousness, and an aversion to what fellow pundit Mark Halperin has called the “freakshow” that American politics frequently devolves into. And he has shown a willingness to think creatively, and even listen to criticism. Consider his decision to have Vermont Senator Bernie Sanders—a socialist!—on just his second episode of Meet the Press, something that would have been unimaginable under Russert or Gregory. Or his recent response on a Reddit AMA session when asked about the depressing state of politics. Don’t be dispirited by gridlock, he urged the questioner. “Check out the innovations taking place in the cities . . . that’s where politics is exciting again”—an unexpected and astute answer from a national political reporter.

Todd may tell readers not to despair over gridlock, but his book fixates on the subject. And how can it not: Global conflagrations abound, an underwhelming economic recovery sputters along—and government seems incapable of doing anything about any of it.

The Stranger centers its narrative on a president elected to change Washington, but who has found himself swallowed by it instead. “Obama’s logic had no place in an age of ferocious unreasonableness,” Todd writes, a pithy diagnosis of his—and our—predicament.

To his credit, Todd ascribes much of this “ferocious unreasonableness” to the right. To read The Stranger is to be reminded, after these numbing years, of just how berserk our era has been. There was a time when calling the president un-American was a beyond-the-pale transgression; now it’s not even news when a news anchor or an elected official does it. Birch-ian conspiracies once left to fester at the lunatic fringe of our politics have encroached onto center stage. It sends a shiver to recall that this president once had to stand in front of cameras in the White House briefing room and insist that, yes, he was born in America.

Then there are the numerous instances of GOP implacability. Todd reminds us that when Obama praised Republican Marco Rubio’s tax-credit proposal, Rubio had to go on talk radio the next day to appease Republican foot soldiers riled up by the president’s seal of approval; that Obama once invited GOP-ers to a White House screening of Spielberg’s Lincoln, and no one showed up; that even after furious courting by the president, not a single Republican voted for a healthcare reform bill modeled after a Republican governor’s plan.

But far too often, Todd falls back on lazy, a-pox-on-both-houses thinking. He lambasts the GOP for its obduracy but upbraids Obama for not trying harder to win Republicans over anyway—this despite Todd’s own observation that Republicans had “perfected” the strategy of total obstruction, and that Republicans had come to see opposing Obama as a simple matter of “self-interest.”

So why advise Obama to keep ramming into the wall of obstruction again and again? Here another Beltway obsession rears its head: optics. Todd reasons that “you always want to be the one that ‘gets caught trying’ ” (never mind the result). The fixation with optics also comes through in Todd’s discussion of Obama’s policies. On a range of issues, from the stimulus to healthcare reform to Syria, Todd weighs in on how the process looked, while devoting barely a second’s thought to the policy’s merits. Near the end, Todd sums up thusly: “In the Obama era and for the presidents after him, style points would take on greater weight than ever, both at home and abroad.” It’s an observation that doubles as self-justification.

The Stranger underscores a broader problem with the way we cover politicians. With its focus on and amplification of the solitary figure of the president, the Washington press corps has made it harder for the public to understand how government works—and, more specifically, why it doesn’t.

In his classic book On Bended Knee, Mark Hertsgaard observed that the evening news used to contain as many stories out of Congress, the Pentagon, Foggy Bottom, and other agencies as out of the White House. That changed in the Reagan years, and has gotten worse since. Now, in an era of legislative gridlock, the focus on the presidency contributes to public misunderstanding—and diverts attention away from a nihilistic faction in Congress that has made even routine governance all but impossible.

There is also the relentless parochialism and small-mindedness of DC. The problem with our politics is that, as the late Meg Greenfield famously observed (and Todd recounts here), Washington is just like high school—a small town filled with insecure people. Sadly, the media would rather see the president star in that teen drama than rise above it.

Indeed, near the end of The Stranger, Todd notes that Obama “shoulders some of the blame” for gridlock by not trying hard enough to play the Washington game. The president is just “wired differently,” Todd writes, “he believes the rational should overcome the superficial.” That such a trait can be cast as Obama’s crucial flaw says much about Todd, the press, and the sad state of our politics.

Has America ever needed a media watchdog more than now? Help us by joining CJR today.
Elbert Ventura is the managing editor of Democracy: A Journal of Ideas. This story was published in the November/December 2014 issue of CJR with the headline, "Pundit, heal thyself."