Archives:
Q and A 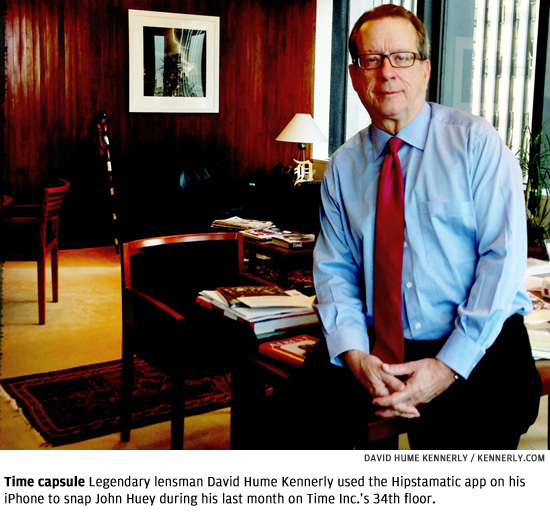 At year-end, Time Inc. editor in chief John Huey quietly announced plans to head to a fellowship at Harvard after an 11-year run (six seven in the top job) on the Mount Olympus of magazine journalism. On his way up, he ran Fortune, coauthored Sam Walton’s autobiography, and held various jobs at The Wall Street Journal, among other things. Master of the homespun maxim (delivered in a wry Southern drawl), Huey famously summed up the recipe for search-friendly headlines: “Clear is the new clever.” Cyndi Stivers, a former employee, emailed questions in December.

Why leave now? Well, do the math. I’ve had a job in journalism nonstop for the past 40 years. I’m in my 25th year at Time Inc., 17 of which I have spent commuting to New York every week from either Atlanta or Charleston. I will turn 65 in April. I have an incredibly able successor in Martha Nelson, who is totally the right person for the right time. The better question is why would I possibly stay?

What was the stickiest wicket you encountered while leading Time Inc.? Journalistically, leading Time Inc. didn’t prove to be as sticky as some of the things I encountered while editing Fortune, mostly because the editors I worked with were just so damned good at what they did. At Fortune, I had the challenge of covering stories like the AOL Time Warner merger, from which we did not shrink in the least. But I always knew I had the backing of (then-editor in chief) Norman Pearlstine and (then-CEO) Don Logan. As editor in chief, my toughest challenge has been trying to lead through some very difficult business conditions without sacrificing the quality, integrity, and distinctiveness of our journalism. I give myself a good grade for that, but then I would, wouldn’t I?

What was the most indelible magazine cover on your watch? Honestly, I think those covers belong to the editors of the individual magazines. At Fortune, I had so much fun making covers that it’s hard to remember. But probably winning a bet with Steve Jobs that our photographer, Michael O’Neill, could take a better portrait of him than his own photographer was as satisfying as any. As far as indelible goes, the 9/11 covers on Time and Fortune and People probably top my memory.

Were there any encounters with world leaders, business honchos, or celebrities that had you pinching yourself? Not really. I’m not that starstruck. I interviewed a lot of people who impressed me: several presidents, a bunch of CEOs, some generals, quite a few international leaders, a serial killer, writers, movie moguls, musicians. In business, the three that stick with me are Steve Jobs, Sam Walton, and Ted Turner, who changed everything they touched. The two smartest people I ever met, I think, are the Bills—Gates and Clinton. Funniest campaign bus: John McCain’s Straight Talk Express. Dullest candidate I ever traveled with: Jimmy Carter. Best all-round bus: Waylon Jennings. Scariest famous person: Vladimir Putin, who totally rattled me. And maybe the closest I came to that “pinching” moment was after interviewing Neil Young, when he looked at me and said in that high-pitched twang: “See you down the road, man.” For some reason I found that thrilling.

Any advice for Martha Nelson? The nuclear code is under the bust of Henry Luce. She doesn’t need advice from me. I’ll probably be calling her for advice.

How would you like your tenure to be remembered? I seriously doubt that it will be. But I’m proud of the fact that we ran a collegial, honest shop where journalists and photographers and designers could be proud to come to work every day and practice their crafts at a very high level. In spite of fierce headwinds, we produced a lot of journalism that we all can be proud of when we retire—oh wait, that’s now!

Has America ever needed a media watchdog more than now? Help us by joining CJR today.
Cyndi Stivers is a former editor in chief of CJR