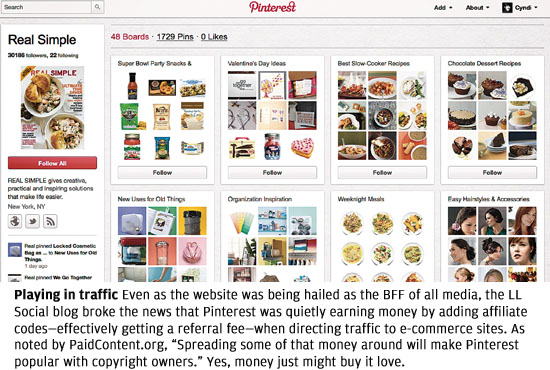 “What is Pinterest and why should I care?” asked a recent blog post on
TheAtlantic.com. In case you’ve managed to elude the digital onslaught on this topic, you can see from the screenshot above that it’s a kind of scrapbooking social network, allowing users to grab images they like and “pin” them to their personal pinboards on Pinterest.com. TechCrunch, citing comScore data, reported in February that the site drew 11.7 million unique monthly US visitors, “crossing the 10 million mark faster than any other standalone site in history.” But the best news is the traffic Pinterest is driving to ye olde media properties.

Case in point: Real Simple, the lifestyle magazine from Time Inc., says Pinterest sends more referrals to its website than any source besides Google, “more than Facebook and Twitter combined,” according to Kathleen Harris, managing editor of realsimple.com. What’s more, most of that activity comes from readers pinning Real Simple content on their own. (The “official” Real Simple pinboard is not just a PR play; it displays content the editors like from all over the Web.) Pinterest can also be a tool: The Wall Street Journal used it to cover Fashion Week.