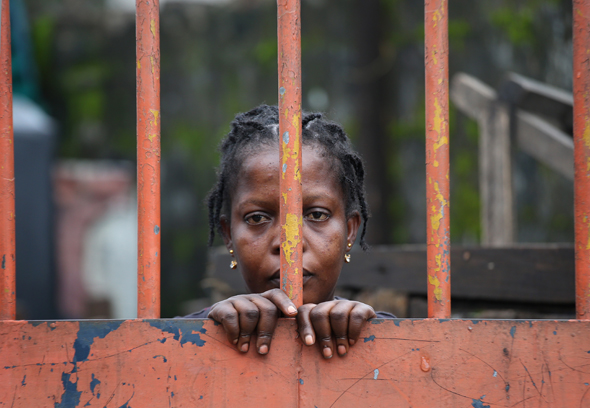 Misery A resident of the West Point neighborhood in Monrovia, Liberia, looks out from behind closed gates after the government quarantined the seaside slum on August 21, amid fears of Ebola contamination. (John Moore / Getty)

With the arrival in the US of the Ebola virus, the American public has demonstrated yet again its ability to unduly wind itself up over any vaguely exotic threat—West Nile, bird flu, anthrax—while ignoring genuine threats like seasonal influenza. The fear has been stoked by the predictable cable-news hyperbole, as well as some alarmist coverage from outlets that should know better. There has been some excellent reporting, too, but unlike when the first West Nile scare descended in 1999, this time around the useful coverage is competing in an informational arena in which social media have created a global megaphone for misinformation, fear-mongering, and the politicization of what is a public-health issue. Another problem: In 1989 there were 95 weekly science sections in US newspapers. By 2012 there were just 19. In 2008, CNN eliminated its entire science team. The Ebola story has underscored the shortsightedness of journalism’s abandonment of specialized science coverage. We need those reasoned, expert voices more than ever.

Has America ever needed a media watchdog more than now? Help us by joining CJR today.
The Editors are the staffers of Columbia Journalism Review. This story was published in the November/December 2014 issue of CJR with the headline, "Opening Shot."