Archives:
On the Job 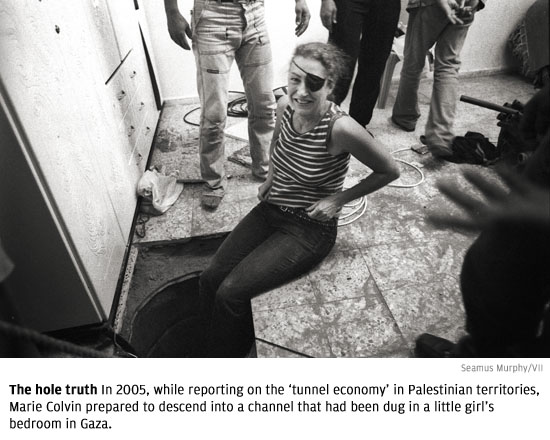 Marie Colvin, who was killed in Syria on February 22, represents a great deal that is excellent about the type of journalism to which she lost her life. We both were foreign correspondents for The Sunday Times of London for many years. Inevitably, that meant covering those wars that were among the biggest stories of our time. Our friendship was that strongest of bonds formed through our common experience of some of the darkest extremes of human behavior.

War reporting is a tough trade which, when Marie started out, was regarded as the glamorous end of journalism. Marie wanted to experience for herself the destructive forces that surface wherever blood and death run rife. She wanted to witness what these things did to people, and she wanted the world to know what she saw.

Hers was an uncompromising, idealistic style of frontline reporting, and she did it well. She had that sense of mission that we all need to make ourselves face the horrific realities of war, so that we can recount them to others. Marie was generous and brave, loyal and kind, and I do not believe she had a malicious thought in her head. She had spirit and stamina, and she carved a stellar path for herself. When she started some 25 years ago, conflict reporting was a male-dominated trade. This did not deter her. She was feminine, but she liked being one of the boys, and was a much-loved figure on the road. She laughed and drank a lot.

Marie was also lucky to have editors who encouraged her in her life’s work. But the qualities that gave her the determination to follow the riskiest stories, and the support she was given to do so, in the end, killed her. Everyone who practices this type of journalism knows that the balance between life and death is a fine one. Marie knew this better than most. But it seemed to her and to The Sunday Times that the risks and rewards were worth it. She believed passionately that her reporting made a difference. And she won many awards, which encouraged her and her editors to run ever-greater risks.

Early on, in Lebanon, she showed the guts that were to mark her career. In 1987, the Palestinian refugee camp at Bourj el Barajneh was under fire from the Syrian-backed Amal militia, which was shooting people as they entered and left the camp. The only way in was to run a gauntlet of fire down the so-called “path of death.” Marie and her photographer, Tom Stoddart, negotiated with the Amal commander to let them make the run. But they were unable to let the armed Palestinians inside defending it know that they were coming. Marie and Tom held hands and ran. Amazingly, they made it without being shot at by either side.

Marie spent two days in the camp, during which time she met Pauline Cutting, a British surgeon and a selfless hero in the middle of the slaughter. When she made the reverse run out, Marie carried in her underwear her photographer’s film and a letter from Cutting addressed to the Queen, appealing for British help. This was typical of Marie. Years later, in 2003, trying to work her way south through Iraqi Kurdistan to position herself to cover the American invasion of Iraq, she hid in the back of a truck under sacks of potatoes.

Marie knew that her job might entail the sacrifice of her life. In 2001, she lost an eye when the Sri Lankan army shelled her while she was re-entering government territory, after reporting clandestinely from a Tamil Tiger guerrilla zone. I flew to Sri Lanka and accompanied her on the long flight from Colombo for hospital treatment in New York, and marveled at her resilience. She was on a stretcher in a lot of pain, exhausted from the ordeal, but she bore the loss of her eye with uncomplaining courage, and she still managed to file a compelling story.

After many years of frontline reporting, the shocks and stresses of the evil that Marie had witnessed inevitably took their toll. She suffered a serious bout of post-traumatic stress disorder after the US invasion of Iraq in 2003, and was unable to work for many months. She was unhappy in love, and there were dark times when friends feared she would commit suicide by throwing herself into the river.

Marie pulled through these recurring dark periods, and lately seemed to have found a renewed vigor. She took up sailing again, a passion from her Long Island upbringing (she grew up in Oyster Bay, NY, the daughter of schoolteachers). She lived on the banks of the Thames, and the parties she gave for the annual boat race between Oxford and Cambridge were legendary. Marie promised her friends to take it easier.

But she could not give up frontline reporting, and when the uprisings in the Arab world began to take root in late 2010, she was unstoppable.

Marie was killed in Syria along with Remi Ochlik, a talented 28-year-old French photographer, when Syrian troops shelled Homs. Her loss is tragic. So, too, Ochlik’s, and other recent deaths—not least the 13 Syrian activists said to have died in getting the photographer who had been working with Marie out of the city. Their deaths have sparked some reassessment of the risks war reporters take, and ask others to take, in the nebulous name of truth.

She is the latest in a long line of colleagues of mine over the years who became victims of war, starting with 20 who were captured and killed by the Khmer Rouge in Cambodia, my own baptism in war reporting, during eight murderous weeks in April and May, 1970.

It is sad that Marie, too, died in this violent way. But not surprising. War always kills, after all. Marie’s style of journalism deserves to survive. At its best it helps us to understand better what our action—or our inaction—does in precarious parts of the world. I hope that people of courage like Marie are prepared to carry on facing danger to tell us, firsthand, what they see.

And let us salute them.

Has America ever needed a media watchdog more than now? Help us by joining CJR today.
Jon Swain is a British writer and foreign correspondent and the author of River of Time: a memoir of Vietnam