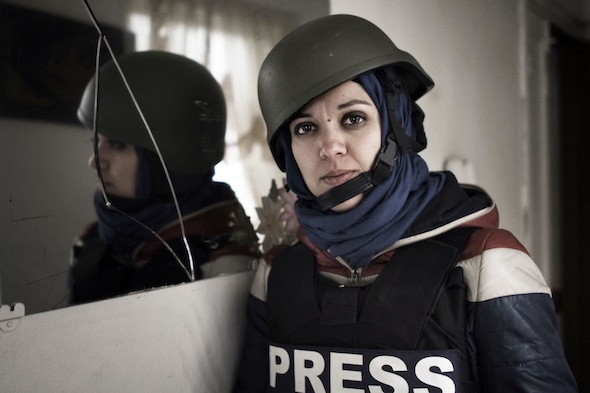 He finally wrote to me. After more than a year of freelancing for him, during which I contracted typhoid fever and was shot in the knee, my editor watched the news, thought I was among the Italian journalists who’d been kidnapped, and sent me an email that said: “Should you get a connection, could you tweet your detention?”

That same day, I returned in the evening to a rebel base where I was staying in the middle of the hell that is Aleppo, and amid the dust and the hunger and the fear, I hoped to find a friend, a kind word, a hug. Instead, I found only another email from Clara, who’s spending her holidays at my home in Italy. She’s already sent me eight “Urgent!” messages. Today she’s looking for my spa badge, so she can enter for free. The rest of the messages in my inbox were like this one: “Brilliant piece today; brilliant like your book on Iraq.” Unfortunately, my book wasn’t on Iraq, but on Kosovo.

People have this romantic image of the freelancer as a journalist who’s exchanged the certainty of a regular salary for the freedom to cover the stories she is most fascinated by. But we aren’t free at all; it’s just the opposite. The truth is that the only job opportunity I have today is staying in Syria, where nobody else wants to stay. And it’s not even Aleppo, to be precise; it’s the frontline. Because the editors back in Italy only ask us for the blood, the bang-bang. I write about the Islamists and their network of social services, the roots of their power—a piece that is definitely more complex to build than a frontline piece. I strive to explain, not just to move, to touch, and I am answered with: “What’s this? Six thousand words and nobody died?”

Actually, I should have realized it that time my editor asked me for a piece on Gaza, because Gaza, as usual, was being bombed. I got this email: “You know Gaza by heart,” he wrote. “Who cares if you are in Aleppo?” Exactly. The truth is, I ended up in Syria because I saw the photographs in Time by Alessio Romenzi, who was smuggled into Homs through the water pipes when nobody was yet aware of the existence of Homs. I saw his shots while I was listening to Radiohead—those eyes, staring at me; the eyes of people being killed by Assad’s army, one by one, and nobody had even heard of a place called Homs. A vise clamped around my conscience, and I had to go to Syria immediately.

But whether you’re writing from Aleppo or Gaza or Rome, the editors see no difference. You are paid the same: $70 per piece. Even in places like Syria, where prices triple because of rampant speculation. So, for example, sleeping in this rebel base, under mortar fire, on a mattress on the ground, with yellow water that gave me typhoid, costs $50 per night; a car costs $250 per day. So you end up maximizing, rather than minimizing, the risks. Not only can you not afford insurance—it’s almost $1,000 a month—but you cannot afford a fixer or a translator. You find yourself alone in the unknown. The editors are well aware that $70 a piece pushes you to save on everything. They know, too, that if you happen to be seriously wounded, there is a temptation to hope not to survive, because you cannot afford to be wounded. But they buy your article anyway, even if they would never buy the Nike soccer ball handmade by a Pakistani child.

With new communication technologies there is this temptation to believe that speed is information. But it is based on a self-destructive logic: The content is now standardized, and your newspaper, your magazine, no longer has any distinctiveness, and so there is no reason to pay for the reporter. I mean, for the news, I have the Internet—and for free. The crisis today is of the media, not of the readership. Readers are still there, and contrary to what many editors believe, they are bright readers who ask for simplicity without simplification. They want to understand, not simply to know. Every time I publish an eyewitness account from the war, I get a dozen emails from people who say, “Okay, great piece, great tableaux, but I want to understand what’s going on in Syria.” And it would so please me to reply that I cannot submit an analysis piece, because the editors would simply spike it and tell me, “Who do you think you are, kid?”—even though I have three degrees, have written two books, and spent 10 years in various wars, first as a human-rights officer and now as a journalist. My youth, for what it’s worth, vanished when bits of brain splattered on me in Bosnia, when I was 23.

Freelancers are second-class journalists—even if there are only freelancers here, in Syria, because this is a dirty war, a war of the last century; it’s trench warfare between rebels and loyalists who are so close that they scream at each other while they shoot each other. The first time on the frontline, you can’t believe it, with these bayonets you have seen only in history books. Today’s wars are drone wars, but here they fight meter by meter, street by street, and it’s fucking scary. Yet the editors back in Italy treat you like a kid; you get a front-page photo, and they say you were just lucky, in the right place at the right time. You get an exclusive story, like the one I wrote last September on Aleppo’s old city, a UNESCO World Heritage site, burning as the rebels and Syrian army battled for control. I was the first foreign reporter to enter, and the editors say: “How can I justify that my staff writer wasn’t able to enter and you were?” I got this email from an editor about that story: “I’ll buy it, but I will publish it under my staff writer’s name.”

And then, of course, I am a woman. One recent evening there was shelling everywhere, and I was sitting in a corner, wearing the only expression you could have when death might come at any second, and another reporter comes over, looks me up and down, and says: “This isn’t a place for women.” What can you say to such a guy? Idiot, this isn’t a place for anyone. If I’m scared, it’s because I’m sane. Because Aleppo is all gunpowder and testosterone, and everyone is traumatized: Henri, who speaks only of war; Ryan, tanked up on amphetamines. And yet, at every torn-apart child we see, they come only to me, a “fragile” female, and want to know how I am. And I am tempted to reply: I am as you are. And those evenings when I wear a hurt expression, actually, are the evenings I protect myself, chasing out all emotion and feeling; they are the evenings I save myself.

Because Syria is no longer Syria. It is a nuthouse. There is the Italian guy who was unemployed and joined al-Qaeda, and whose mom is hunting for him around Aleppo to give him a good beating; there is the Japanese tourist who is on the frontlines, because he says he needs two weeks of “thrills”; the Swedish law-school graduate who came to collect evidence of war crimes; the American musicians with bin Laden-style beards who insist this helps them blend in, even though they are blonde and six-feet, five-inches tall. (They brought malaria drugs, even if there’s no malaria here, and want to deliver them while playing violin.) There are the various officers of the various UN agencies who, when you tell them you know of a child with leishmaniasis (a disease spread by the bite of a sand fly) and could they help his parents get him to Turkey for treatment, say they can’t because it is but a single child, and they only deal with “childhood” as a whole.

But we’re war reporters, after all, aren’t we? A band of brothers (and sisters). We risk our lives to give voice to the voiceless. We have seen things most people will never see. We are a wealth of stories at the dinner table, the cool guests who everyone wants to invite. But the dirty secret is that instead of being united, we are our own worst enemies; and the reason for the $70 per piece isn’t that there isn’t any money, because there is always money for a piece on Berlusconi’s girlfriends. The true reason is that you ask for $100 and somebody else is ready to do it for $70. It’s the fiercest competition. Like Beatriz, who today pointed me in the wrong direction so she would be the only one to cover the demonstration, and I found myself amid the snipers as a result of her deception. Just to cover a demonstration, like hundreds of others.

Yet we pretend to be here so that nobody will be able to say, “But I didn’t know what was happening in Syria.” When really we are here just to get an award, to gain visibility. We are here thwarting one another as if there were a Pulitzer within our grasp, when there’s absolutely nothing. We are squeezed between a regime that grants you a visa only if you are against the rebels, and rebels who, if you are with them, allow you to see only what they want you to see. The truth is, we are failures. Two years on, our readers barely remember where Damascus is, and the world instinctively describes what’s happening in Syria as “that mayhem,” because nobody understands anything about Syria—only blood, blood, blood. And that’s why the Syrians cannot stand us now. Because we show the world photos like that 7-year-old child with a cigarette and a Kalashnikov. It’s clear that it’s a contrived photo, but it appeared in newspapers and websites around the world in March, and everyone was screaming: “These Syrians, these Arabs, what barbarians!” When I first got here, the Syrians stopped me and said, “Thank you for showing the world the regime’s crimes.” Today, a man stopped me; he told me, “Shame on you.”

Had I really understood something of war, I wouldn’t have gotten sidetracked trying to write about rebels and loyalists, Sunnis and Shia. Because really the only story to tell in war is how to live without fear. It all could be over in an instant. If I knew that, then I wouldn’t have been so afraid to love, to dare, in my life; instead of being here, now, hugging myself in this dark, rancid corner, desperately regretting all I didn’t do, all I didn’t say. You who tomorrow are still alive, what are you waiting for? Why don’t you love enough? You who have everything, why you are so afraid?

With the exception of Alessio Romenzi, the names in this article have been changed for reasons of privacy. 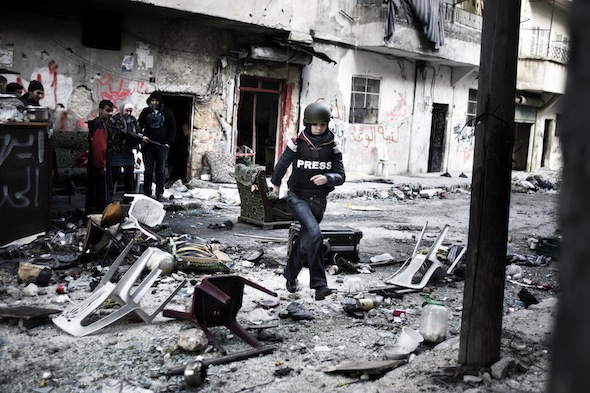 Has America ever needed a media watchdog more than now? Help us by joining CJR today.
Francesca Borri published two books, one on Kosovo and another on Israel/Palestine, while working as a human-rights officer. She turned to journalism when she realized that power players were more upset by what she wrote than what she did as a jurist.