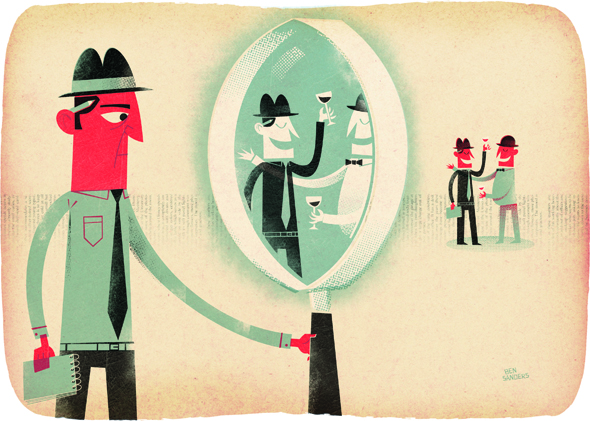 Back in October, Bill Keller of The New York Times and Glenn Greenwald, formerly of The Guardian and now leading a new journalism venture backed by billionaire Pierre Omidyar, engaged in a celebrated and interesting 5,400-word back-and-forth on the Times website about an ancient journalism question: the relative virtues of reportorial “objectivity” (or impartiality, as Keller prefers) versus activist reporters who wear their beliefs on their sleeves.

The first term must always be surrounded by quote marks because no one seems to fully believe in it. Still, Keller describes his “impartial” journalism as being potentially as potent as any other form but one that expects reporters “to keep their opinions to themselves.” He sets his kind of journalism apart from “crusading journalists,” including the muckrakers who set the crusading standard a century ago. Greenwald counters with the often-expressed argument that objectivity is an impossible goal, and adds that this “suffocating constraint on how reporters are permitted to express themselves produces a self-neutering form of journalism that becomes as ineffectual as it is boring.”

A for-instance revolved around the word “torture”—why Greenwald would use it, and why Keller thinks it unnecessary if relevant facts are provided instead.

The trouble with this argument isn’t only that there’s no resolving it, or that it’s fuzzy and imprecise. The problem is that it’s the wrong argument. A more clarifying polarity than objectivity versus activism, or impartiality versus partisanship, is one that CJR’s Dean Starkman lays out starting on page 39: access versus accountability.

This, he argues, is the perennial tension that defines the field, its “Jacob and Esau, Gog and Magog.” These are two different views of journalism’s very purpose, forever in competition for status, resources, and power. These approaches require different skills, different practices, and different sources, and produce radically different representations of reality. Access journalism seeks to provide insider information from powerful institutions and people. Accountability journalism seeks to provide information about those people and institutions. Put in even shorter-hand, access reporting tells you what the powerful said, while accountability reporting tells you what they did.

Nowhere was the difference more consequential than in the coverage of Wall Street and the mortgage business in the run-up to the Great Recession, the subject of Starkman’s new book (from which the article is excerpted): The Watchdog That Didn’t Bark: The Financial Crisis and the Disappearance of Investigative Journalism. It was accountability reporting—done, as it happens, almost entirely outside the mainstream business press—that understood and conveyed the systemic corruption that was overrunning the subprime mortgage business. Access reporting not only missed the story, but, Starkman argues, it fueled the frenzy.

This debate is not about the use of hot words, like “torture.” It’s about whether journalism perceives as its core mission holding power to account. If it doesn’t, then the DealBooks and Playbooks of the world will always win the day. If it does, then the access-accountability polarity should be the defining measure of journalism’s merits.

To be clear, access journalism is not an inherently bad thing, and is in fact a vital, useful, and inevitable journalistic form. Given the competitive pressures and the way the world works, there will always be a journalism focused on getting close to elites to learn what they are thinking and intending. And that’s okay. It’s the other stuff—public interest-oriented, accountability journalism—that is at once journalism’s most powerful and paradoxically its most vulnerable form; the riskiest, the costliest, the most technically difficult. It’s the journalism we need to worry about. Other debates are a parlor game by comparison.