Alexia Tsotsis carries bags inside her bags. The 31-year-old San Francisco co-editor of TechCrunch carries enough stuff with her “in case I’m walking down the street and someone says ‘You need to be in New York right now.’ I could do that,” she says. She could also curl her hair, go for a run, or, yeah, cover any breaking tech news. You can’t do that with a dainty purse. Instead, Tsotsis carries a large, heavy-duty Incase backpack, the kind more typically seen on male athletes. “Blogging is a sport,” she says—-and she’s only kind of joking. 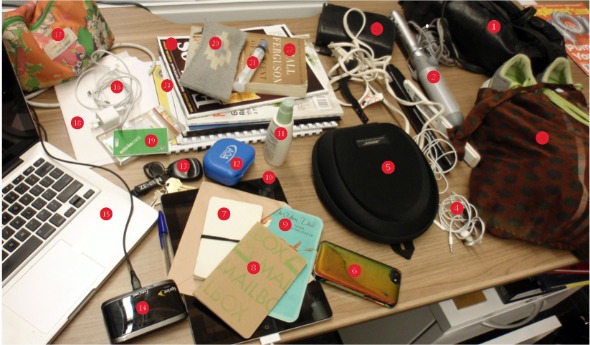 To see a larger version of this image, click here.

1. Prada purse. During the day, she carries just the purse.

2. Hair curler and hair straightener. Tsotsis spends a lot of time showering, since she’s always traveling to events and to visit her boyfriend in Palo Alto.

3. Gym clothes and shoes (in their own bag). Ideally, Tsotsis jogs before coming to work, but, she admits, “I end up running at work.”

6. iPhone 5. Can you even cover tech in San Francisco and not own an iPhone?

8. Index cards. Although Tsotsis uses the app Evernote for most notes, she always carries a notebook and index cards to jot down ideas, quotes, etc.

9. Birthday card for her dad

14. Sprint MiFi mobile hotspot. Having reliable Internet access during events and conferences can be a tangible business advantage for a tech website—and it can be brutal fighting for that access.

15. MacBook. Her backup since she lost her MacBook Air.

18. Car-insurance information (upside down so you can’t read it)

19. Entry cards for TechCrunch and aol office (though she rarely goes)

21. Ear-wax-removal syringe. Fun fact: Ear wax builds up if you’re on the phone a lot.

22. The Ascent of Money, by Niall Ferguson. Tsotsis always carries a book, and just finished Andy Kessler’s How We Got Here. She decided to read more books about the history of things she covers, like money, which, she says, “confounds a lot of people.”

23. Forbes Magazine. Stolen from the lobby area of the TechCrunch office.

24. Essays on corporate culture. Tsotsis is working on an internal manual about the culture of TechCrunch, how the editorial process works and what is a TechCrunch post.

Has America ever needed a media watchdog more than now? Help us by joining CJR today.
Kelly Dunleavy O'Mara is a writer, reporter and former professional triathlete outside San Francisco. Her work has appeared online, in print and on radio for Competitor Magazine, Outside, KQED, and others.