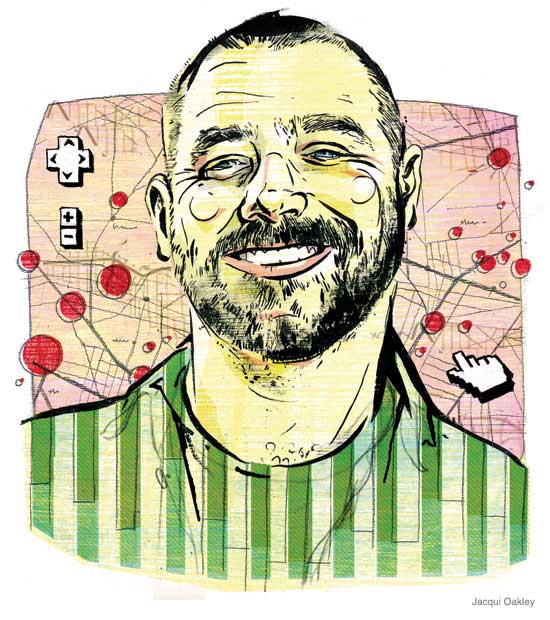 Back in May 2007, Brian Boyer was just another computer guy short-circuiting from ennui sitting on a friend’s couch, reading blogs. Then he noticed a post on BoingBoing about Northwestern University’s Medill School, which had just announced big scholarships specifically for computer programmers interested in a master’s degree in journalism.

As any good techie would, Boyer Googled “journalism” to learn more about the practice and beliefs of the profession that was courting people just like him.

He was invigorated by what he found: ennobling definitions that described journalism as a way to inform people and help them better self-govern. By January 2008, he was an inaugural member of the program, which was funded by a Knight News Challenge grant and designed to train people who write code to write ledes. The idea: to re-boot the industry’s online presence, which has suffered from lack of talent (and imagination) in producing user-friendly databases and interactive news applications. As Boyer says: “Journalism needs more nerds.”

Since mid-2009, thirty-three-year-old Boyer has been the news application editor at the Chicago Tribune, where he leads a team of five tasked with helping the paper achieve new levels of computer-assisted reporting and reader interactivity. It’s a couch-to-newsroom story of growing frequency in the digital news world.

Boyer has anointed his kind “hacker-journalists,” “hacker” being akin to an ace among programmers. They’re guided by a do-gooder mentality and an open-source ethos—believing that information, from programming code to government documents, should be free to all. Like-minded groups dot the country and there are frequent meetups of journos and techies. Some, called “hackathons,” include competitions, such as last year’s challenge to report out and then code apps to help New Yorkers get critical urban info (like the best time to catch a cab), while building community spirit.

One such group, called Hacks/Hackers, was co-founded by Boyer’s mentor at Medill, professor of digital innovation Rich Gordon. Gordon tried for years to turn journalists into programmers before reversing his idea and dreaming up the scholarship that pulled in Boyer, and, to date, eight others. “I think it’s been extremely successful,” he says of the marriage of computer science and journalism. Elsewhere, for instance, Columbia University began offering a joint master’s in journalism and computer science this year. “It’s not a radical concept anymore.”

So far, Boyer’s team has built online programs to help families find the headstones of loved ones after cemetery caretakers double-sold plots, as well as an application to help parents compare schools. During a Tribune investigation into the problems created by a state policy of housing non-senior felons in nursing homes, Boyer saw reporters struggling to read thousands of government documents—they were considering narrowing the scope from statewide to just the Chicago area. So Boyer wrote a program that downloaded the documents from the web, exported the text, and searched for key words. In a few hours, he searched 44,000 documents and presented the investigative team with the 3,600 relevant to their research. His team then built an unprecedented database for the Tribune website that allows readers to search for any nursing home in the state to see its record of reported crimes, violations, and the number of resident sex offenders and felons.

Boyer calls it the most important work of his career, which before journalism was mostly programming to help marketing teams and law firms buried in paperwork. “I feel like the only way we should be judging stuff is by impact,” Boyer says. “Is this work making the world a better place?” So far, so good. The investigation spurred sweeping reform to reduce nursing home violence, signed into law by Governor Pat Quinn in July. Among other things, it mandates that state government create its own version of the database. On his blog, Boyer crowed, “Better software is about to become Illinois law.” It’s what can happen when a self-described nerd and a crusading journalist collide.

Has America ever needed a media watchdog more than now? Help us by joining CJR today.
Bret J. Schulte is an assistant professor of journalism at the University of Arkansas. He has previously written for U.S. News & World Report, The Washington Post, and the Arkansas Democrat-Gazette, among other publications.