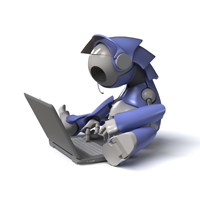 Factchecking has been going out of style for years, as magazines and other publications embrace the feckless creed of modern journalism: Do More With Less. In its place has emerged a sort of after-the-fact, vigilante version of factchecking, in which journalists and their watchers use the internet to gleefully uncover everything from honest gaffes to quote-pipers and plagiarists. Now comes a wave of factchecking bots–semiautonomous software applications that perform a high volume of repetitive tasks. Like the rest of robot journalism, the prognosis for these things is uncertain: “I don’t think there’s any perfect tool or bot out there yet,” says Jane Elizabeth, who leads the American Press Institute’s Fact-Checking Project. “There’s a lot of development and testing to be done.” Here’s a look at some of the bots whose designers hope may one day save us from ourselves:

Trooclick
As users read financial stories, this plug-in flags details that differ from SEC filings, and from other articles on the topic.

Truth Teller
This Washington Post initiative transcribes political videos and checks them against a database that draws on PolitiFact, FactCheck.org, and the paper’s own Fact Checker blog. The program then tells viewers which statements are true and which are false. In 2015, the Post plans to annotate videos in real time.

Pacific Social
This startup’s bot will act like a social-media user, friending people and reading their posts. Initially, the project’s focus will be on the link between vaccines and autism. If someone posts misinformation about the link, the bot will challenge their views or suggest better sources. But chief scientist Tim Hwang says, unlike some social-media bots, his won’t actually pretend to be human. Trials start in about six months.

Hearsift
The brainchild of MIT Technology Review’s Will Knight and MIT PhD student Soroush Vosoughi is a plug-in that will analyze a tweet’s content, its forwarding history, and its author’s track record to judge both the truth of the message and the strength of its evidence. A beta version is due by the end of the year.

Pheme
This European Commission-funded project coordinates efforts by nine institutions and companies. One tool being developed would evaluate Twitter users’ histories, connections, the evidence they use to support their claims, and other factors to advise journalists of the likelihood that individual tweets are true. Prototype due in spring.

Has America ever needed a media watchdog more than now? Help us by joining CJR today.
Tamar Wilner is a Dallas-based freelance journalist and researcher who writes about misinformation, fact-checking, science communication, and all things media. She tweets at @tamarwilner. This story was published in the September/October 2014 issue of CJR with the headline, "Meet Hal, your factchecker."