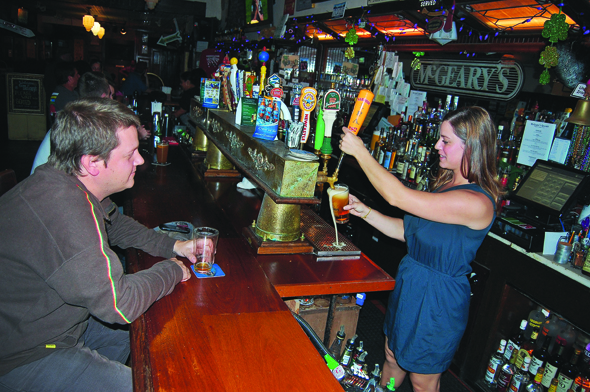 Distinguishing features  A stuffed hammerhead shark dangling over the middle of the main room, a patio that in warm weather sprawls along the entire street, and the occasional can’t-miss burlesque show.

Who drinks here Bureaucrats celebrating the end of their day, copy editors and the reporters they torture, city councilmembers after their meetings, gay men and lesbians, punk rockers, and the occasional suburbanite taking in a show at a nearby theater.

On the record McGeary’s rebooted in 2010 when Tess Collins, the doyenne of Tess’ Lark Tavern, relocated across town after a fire gutted her previous watering hole. That bar had long been a hangout for journalists, who over time have migrated to McGeary’s.

Off the record Many memories from the old Lark Tavern have also transferred to McGeary’s, including the legend (and regular bar stool) of Jim McGrath, the late Times Union editor who once redrew page one on the back of a placemat after late-breaking news; or the ghost of a little girl who Collins and bartender Alex Albino would see (and converse with) in the apartment above the old bar.

Has America ever needed a media watchdog more than now? Help us by joining CJR today.
Jimmy Vielkind is a senior reporter in Capital New York's Albany bureau.