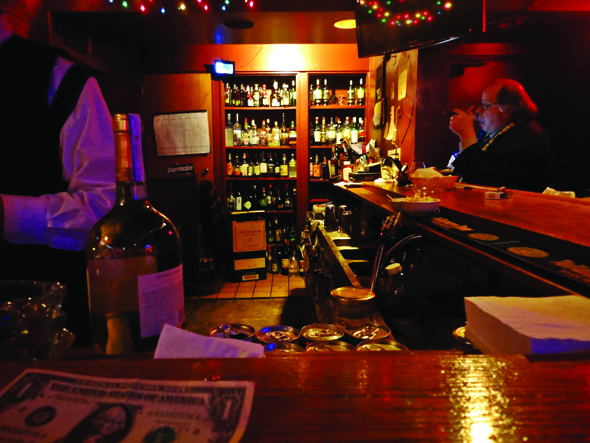 Distinguishing features Club members are especially proud of the Pen & Pencil’s semi-secret location down a Center City back alley. For many years, the club’s small lobby was home to an impressive collection of antique typewriters, some of which remain. Inside the club itself sits the notorious hotdog crockpot, ever-present and filled to the brim with free wieners that float in boiling brine.

Signature drink General manager Dan Kenney makes what is perhaps the finest Manhattan in all of Philadelphia. But for most P&P members, a bottle of beer does the trick, especially if it’s a Yuengling.

Bold-faced names President William Howard Taft once pulled an all-nighter at the P&P. Broadway legend George M. Cohan was a regular, as were Red Smith and Damon Runyon.

On the record The P&P began as a merger of three reporters’ clubs. At the time, there were 13 dailies serving Philadelphia—that’s a lot of reporters. Since then, the P&P has occupied nearly a half-dozen different locations. The current bar, which appeared in an episode of Anthony Bourdain’s series, The Layover, was previously home to a ladies bridge club. (And yes, the rumors are true: After being soundly beaten at a game of rock-paper-scissors during his visit, Bourdain was forced to down a shot of hotdog water.)

Off the record Just about anything that happens at the P&P stays at the P&P. The club has a longstanding “off the record” tradition that’s taken very seriously. “One of the nice things about the bar,” says Philadelphia Daily News reporter and P&P President Chris Brennan, “is that it’s a place where people can freely exchange ideas.” The club also hosts a weekly lecture series featuring local newsmakers. The talks are known as—you guessed it—Off-the-Record Sessions. Guest speakers (governors, police commissioners, and even the mayor) are free to share the down-and-dirty details of their jobs, secure in the knowledge that their secrets won’t show up in the next day’s morning edition.

Send recommendations for this feature to [email protected]

Has America ever needed a media watchdog more than now? Help us by joining CJR today.
Dan Eldridge is a CJR contributor.